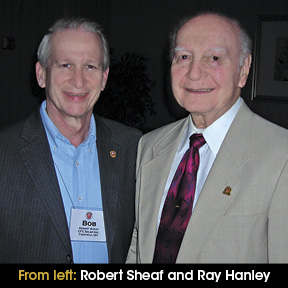 I was very saddened by the death of my good friend Ray Hanley, who passed away May 30 of this year. I got my first certification in 1987 and was introduced to several members as time went by, and in the early 1990s, I met Ray at an IFPS annual meeting. He was dedicated to educating everyone in the fluid power industry for the purpose of raising the bar of expertise and competency in our industry and providing a vehicle for attaining it. We worked together for many years on the certification committee of the IFPS, and he encouraged me to the point of becoming the Society’s president in 2000.

Ray and I would have long discussions about the lack of training in our industry and how to improve it. When I owned a repair business in the 1980s, I would receive a lot of hydraulic pumps for repair and rebuild. Over 50% of the units made me wonder why the customer sent them in to us. They were in good condition inside and should have functioned fine. When we contacted the customer, the predominating response was “lack of pressure” in the system. Pumps do not cause pressure; their job is to provide flow. Resistance in the system causes pressure. Invariably, we would get a bad cylinder or pressure control to repair after the customer installed the rebuilt pump, and it did not fix their original problem.

When I was in the repair business, I put on a basic fluid power course one night a week for eight weeks. I got a lot of satisfaction out of helping our customers’ employees understand troubleshooting techniques and how their systems worked. This was probably why I started CFC 25 years ago, and I still enjoy it at the age of 70.

Like Ray, I too felt that certification was a good tool to elevate the expertise and knowledge of our industry. I just wish more employers would see the value and return on investment that well-trained employees bring to the table in less downtime and fewer components purchased.

Ray felt strongly that IFPS and its certification program would be a great vehicle to encourage and promote training. Over the 25 years CFC has been in business, I can say that a large number of fluid power distributors, power and light companies, as well as several OEMs have promoted training and the certification of their employees that might not have happened if it were not for the IFPS certification programs.

I’m sure Ray is happy with how the IFPS has made such an impact on our industry and continues to do so.