A Conversation with Jennifer George 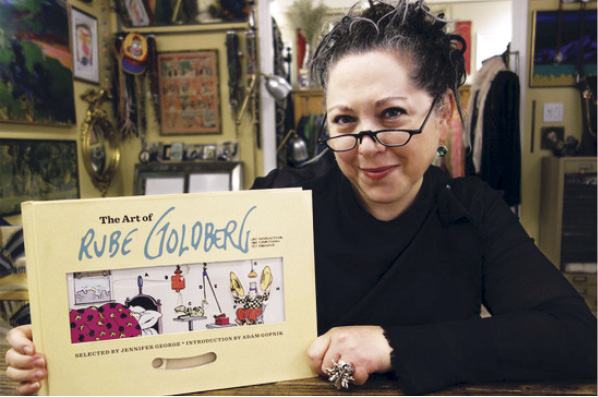 Q: People know Rube Goldberg as a cartoonist who was trained as an engineer and, for many, the guy we learned about in elementary school who inspired those fun projects to accomplish a simple task with as many steps as possible. But he’s more than that to you. Tell us what he was like as a grandfather.

People expect me to describe my grandfather as a nutty professor with closets filled with bowling balls and palm trees and parrots. But he was actually just what I imagine most grandfathers are like, although he did like to be the center of attention. When I was very little, my parents used to tell me I would run from him crying because he didn’t realize how strong his hands were, and when he would reach for me to pull me on his knee, his grasp was too strong. As I got older, he was more fun to be with, and we would draw together, sit in his workroom, and sculpt with clay, as he was a sculptor later in life. He taught me how to make paper balloons. He taught me how to shake hands. He told me to look people in the eye and with a firm grip, shake their hand and let them know they’re meeting someone. He always smoked a cigar, wore suspenders and a bow tie, and he wore shoes when he went swimming. I understood that he was an artist, but it wasn’t until the Smithsonian exhibit in 1970, a retrospective of his work, that I truly understood the scope of what he had accomplished.

Q: Rube Goldberg drew 50,000+ cartoons, but it’s said he never made any of those overly complicated contraptions featured in many of them. Did your grandfather tinker and build as so many engineers do?

According to a recent interview that I heard of Rube and my grandmother Irma, my grandmother said Rube was hopeless around the house and he couldn’t even change a lightbulb. I think all of his tinkering took place in his mind, then made its way into his drawings. In fact, I remember spending afternoons at the beach house when I was a kid trying to put together model toy kits (that you can even still today find on Ebay) from his drawings, and neither he nor I could build them.

Q: Your grandfather won the Pulitzer Prize for his political cartoons, but he also encouraged his sons—your dad and uncle—to change their surnames. Can you tell us about that?

Rube was drawing political cartoons during WWII, and obviously, his last name was a beacon for anti-Semitism. There were apparently threats on the family, and Rube, a non-religious Jew, was very protective of his sons and preserving their anonymity, both as sons of a famous cartoonist and the religion implied by their last name. My father’s older brother, Tom, when he was 18, went off to college with a new last name and become Thomas George, and my father, two years later, in order to keep some family continuity, chose the same last name; he became George W. George. People would joke when they met him that his parents must have had a great sense of humor. Little did they know!

Q: What do you think your grandfather would say about current technology, particularly the consumerization of tech?

I am certain he would have thought it would be a boon for chiropractors, massage therapists, and neck-tie manufacturers, as everyone walks around with their heads down!

Q: How do you work to keep your grandfather’s legacy alive?

My father founded Rube Goldberg Inc. almost 30 years ago as a way to preserve and license Rube’s work and as a means through which to organize, manage, and grow the competitions. A decade ago, when my father died, the mantle of all this landed on my lap. My father had always wanted to get me involved, but I was very reluctant and had my own career (as a fashion designer), not to mention raising two children of my own that took priority. But when he died, I inherited the Abrams book deal, as my father had agreed to do a coffee table book on the work of his father. I wanted to honor my father’s wishes to have this book published, and instinctively, I knew it would be the foundation upon which I would build whatever was to become of Rube’s legacy. After immersing myself in the archive, ideas began to flow: a feature film, a toy line, an amusement park ride, everything from board games to digital games, books and calendars, apparel and home accessories—the sky’s the limit! That’s the for-profit branding side, but my heart sits squarely with the kids and the competitions. Last year, we were finally designated a 501c3 non-profit as STEM education is our priority.

Q: What’s your favorite part of the contests RGI holds for students each year?

Meeting the kids and seeing how they solve the annual task. I usually at some point get choked up and start crying, and it’s not because the machine doesn’t work!

Q: NEF focuses on three challenges facing American engineering—the 3Cs—capacity, capability, and competitiveness. Capacity is the challenge of making sure we have enough qualified engineers to fill the jobs of today and tomorrow. How do you see competitions like the Rube Goldberg contests playing into solving that challenge?

We reach kids before they even know that they’re studying science and engineering, technology, or math. Our slogan is “STEM starts here” and it’s true. Little kids in elementary school learn about physics, engineering, timing, addition/subtraction, literally piecing together a Rube Goldberg Machine, and it begins the conversation. A little girl who has no idea she likes science, or thinks that science is just for boys, has fun building a Rube Goldberg Machine and learns that’s what science is. Our competitions at every age, elementary through college, pose the same problem to all. We inspire kids to look around them and use everyday objects to solve a simple problem. But we also ask them to create a story around the task; we ask them to be funny and add narrative, connecting STEM education with literacy and storytelling. Rube Goldberg Machines are a teaching tool that also levels the playing field; you don’t need anything but a pile of junk and a great imagination to build an award-winning Rube Goldberg Machine. I always say a Rube Goldberg Machine should come from landfill and not contribute to it.

The information above was first published in the NEF newsletter and is reprinted here with permission from NEF, which brings together leaders concerned about the sustainability of engineering in the United States and the impact on the nation’s security and prosperity. NEF involves industry executives, academics, policymakers, media, engineering societies, and nonprofits to develop solutions to the challenges facing the U.S. engineering enterprise. For more information, contact by phone: 202-969-3410, by email: info@nationalengineeringforum.com, or on the web: www.nationalengineeringforum.com.