There are many types of vacuum cups available from a large range of manufacturers.  The primary application of vacuum cups is on automated machinery, such as packaging lines, robotic palletizing, automotive steel stamping, and so on. Selecting the correct vacuum cup for each application is key to enabling the machinery to operate in an efficient, safe, and reliable fashion. This article offers basic insight on how to make the correct selection to ensure that the aforementioned criteria are met.

The most common selection process is vacuum cup size. The larger the cup, the higher the holding capacity. Choosing the cup based on the size is not the first selection criteria that should be considered, however. That being said, because this is the most common first selection made by the user, let’s begin by explaining how a vacuum cup’s size determines its holding force.

The shape and height of a vacuum cup is completely irrelevant as to how much holding force it will produce. It’s all about the surface area. That is, how large the surface area is at the point where the cup meets the load to be handled. Fig. 1 shows two vacuum cups—one “bellows” design on the left and one that is a “flat” design on the right. Both cups measure 75 mm or 2.95″ diameter at the pickup face or sealing lip. Therefore, the following would apply. 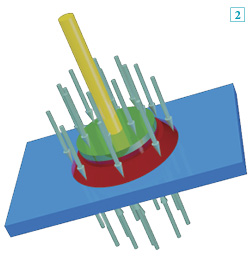 So, as you can see, a vacuum cup of only 3″ diameter lifts 80 lbs quite comfortably, at least in a theoretical calculation, which although accurate, isn’t very wise in the “real world.” Safety factors should be employed, and when I am asked what factors, I always state the same answer as much as possible, at least within reason: a safety factor of THREE in a horizontal plane and SIX in a vertical plane to overcome shear force as shown in Fig. 3. Certain manufacturers recommend TWO and FOUR respectively, but I ask you, which is safer? Exactly.

Put simply, it’s rare that vacuum cups are not lifting because they are too small in size. It’s normally because of poor cup selection, which means they are unable to seal against the load or that during high-speed transfer the cups “let go.”
Consequently, the type of vacuum cup is very important, particularly if the application has a history of unreliability or critical failure. 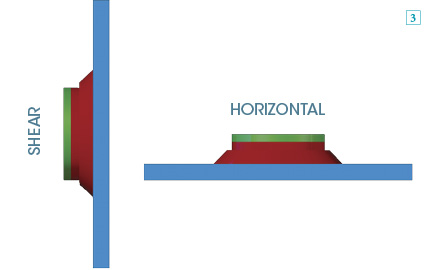 Flat vacuum cups are certainly the least expensive, as there is simply less material and the mold tool is not as complicated. Flat cups are normally used in pick-and-place applications where the load being handled is of a constant height or Z position. Therefore, if the machine were de-stacking material, such as steel plate, the cup would have to incrementally move each time in the Z axis to allow for the decreasing height of the stack. Flat cups are often used in partnership with a level compensator (Fig. 4), which as the name suggests, compensates for height variance in the load being picked.

Level compensators are useful when picking sheets that are not square or perpendicular to the machine movement. Fig. 5 illustrates a situation where the sheets being handled have a weld in the center, and therefore, the stack is convex towards the vacuum cups.

The single biggest advantage of a flat vacuum cup is its low deformation during high-speed transfer applications, which means it maintains grip and security on the load, such as steel sheet handling or rapid pick-and-place applications.

However, a flat vacuum cup has to be positioned accurately in a pick-up and put-down application if a level compensator is not being used, whereas a BELLOWS cup offers its own level compensation in its design. In de-stacking or stacking applications where the datum point is continuously changing, the bellows cup is particularly beneficial. Fig. 6 shows how the bellows cup also offers work piece movement independent of the machinery. This is particularly useful for sheet separation where the top sheet could stick to the sheet underneath in a de-stacking application. When vacuum is applied once the cup is sealed against the surface (Condition One, Fig. 6), the bellows cup will contract and “peel” the sheet away from the stack underneath (Condition Two, Fig. 6). Therefore, if you are using a number of vacuum cups, applying vacuum to one array of vacuum cups just before another array will provide this peeling effect, independent of machine movement. 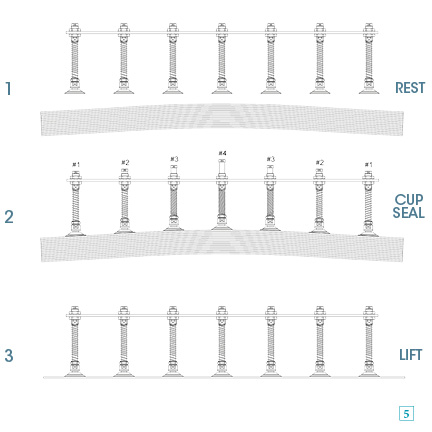 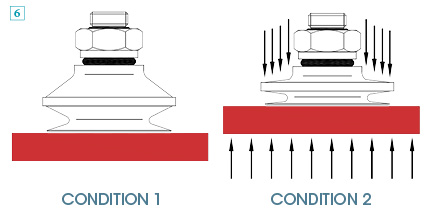 Read Part Two of this article in the February Systems Integrator Directory issue.

Daniel Pascoe is an independent industrial consultant with clients across North America and Europe, one of which is Vacuforce LLC (www.vacuforce.com), a manufacturer and distributor of vacuum components for whom this article was co-written. Daniel can be reached via www.davasol.com or directly at dpascoe@davasol.com. Find Vacuforce on Facebook keep updated on twitter.com/vacuforce.