Figure It Out: Drifting Cylinder in a Rolling Mill 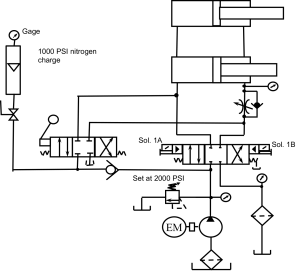 A local repair shop was asked to troubleshoot a problem on the hydraulic system that closes a watertight door on a floating casino. The circuit was designed with an electrically driven hydraulic power unit that would open and close the door with two hydraulic cylinders. If there was a power failure, the normally open door would be closed with a manual hydraulic valve connected to an accumulator.

A problem was encountered when the door was tested during a safety inspection. They found that the accumulator circuit that was designed to open and close the door two complete cycles out and back only moved the door in one position about halfway and would fail to move any further.

If they put power to the hydraulic unit, it would cycle the door as needed. Shutting it down and trying the manually operated piston accumulator cycle would only move the cylinder halfway before it stopped. They observed the nitrogen gas charge would show system pressure when the main electric unit was running and dropped to a very low pressure when the manual circuit was engaged.

Solution to the November/December 2021 problem:
Drifting Cylinder in a Rolling Mill 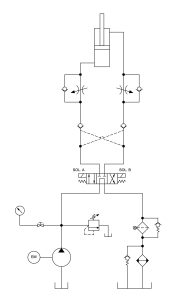 When I looked at the problem, I asked the company for the circuit and noticed that the directional valve center position had the A and B ports blocked, preventing the signal lines from quickly draining to tank, which would allow the checks to totally close and lock the cylinder into position. Typically, A and B pilot-operated checks require a valve center position to have A and B connected to the tank. I think the designers experienced the same drifting problem and thought blocking the A and B ports was the solution.

I had the customer change the relief valve to a solenoid operated on/off  pilot-operated relief, which lowered the back pressure caused by the retrun filter. They also changed the center position of the directional valve to an all-ports-connected design.