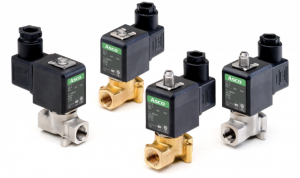 The optimized body design and internal flow path of the valves provide a smaller footprint, reduced power consumption, and increased pressure ratings critical in industrial and commercial applications. Achieving comparative pressure ratings in a smaller valve typically results in increased power consumption, but the Series 256/356 reduces energy use by as much as 40%.

The pressure rating of some versions of the redesigned Series 256/356 has increased by up to 30% compared to the previous versions, enabling them to be used in more demanding applications, such as high-pressure washers and hydrogen fuel dispensers. The performance of the DC voltage version is now similar to that of the AC voltage version, enabling overall system costs to be reduced by eliminating the need to convert to AC power to maximize solenoid valve performance.

The Series 256/356 offers an expanded selection of body materials, including lead-free brass, stainless steel, and an engineered composite material that is 20% lighter than brass and meets global health and safety standards for food-and-beverage applications. The valves are dust-tight, IP67-rated and submersible in up to one meter of water, making them suitable for harsh environments, increasing reliability and extending the life of machinery.

The Series 256/356 has multiple end-connector options and flexible electrical connections, reducing installation time by up to 40% and making service and maintenance much easier.