Along with the rest of the manufacturing and industrial economy, fluid power is in an economic recession and will remain so for the next few quarters, though “the future is potentially bright.”

While the economy overall is rebounding from the recession caused by last spring’s COVID-19 lockdowns, shipments in the hydraulics and pneumatics industries will face three more quarters of decline before they move into a recovery phase in 2021, according to economist Catherine Putney of IRT Economics, who delivered a webinar on Oct. 29 for the National Fluid Power Association.

“We’re going to get out of this rut that we’re in, and we’re going to see that recovery trend pretty imminently,” Putney said. “The recovery’s coming. We’re seeing it in the leading indicators.”

The leading indicators show fluid power “poised for a turnaround that we’re expecting in the industrial economy and the manufacturing economy,” Putney said.

Worldwide, the economies of Europe, Asia, and North America are rebounding in fits and starts of varying size and intensity.

The Wall Street Journal recently reported that the U.S. economy “grew at a record pace in the third quarter – increasing 7.4% over the prior quarter and at a 33.1% annual rate – recovering about two-thirds of the ground it lost earlier in the coronavirus pandemic.”

In another indicator of the economy’s health, the Journal reported on Oct. 29 that “the number of Americans filing initial claims for unemployment insurance fell last week to the lowest level since the pandemic began, suggesting layoffs are easing despite a rise in coronavirus infections.”

Elsewhere, “the eurozone economy grew at a record pace in the third quarter, but has already stalled in the face of a resurgence of coronavirus infections and tough new restrictions,” the Journal reported.

In Taiwan, “GDP growth came in at 3.3% for the third quarter from a year ago,” according to the Journal. In another story, the newspaper reported that “the global economy came back strongly in the three months through September from the huge declines in output recorded in the second quarter.”

This is all good news, and for most U.S. industrial markets that use fluid power products, recovery and expansion will begin in the second, third, and fourth quarters of 2021, ITR forecasts.

“The future is potentially bright as we move through the next couple of years,” Putney said.

ITR is forecasting a quicker rebound for pneumatics than for hydraulics when the economy starts to recover. But even when both sectors grow, they will not reach the peak levels of 2019. The recovery levels by 2023 will be closer to the “bottom of the trough in 2016 and 2017 levels,” Putney said. 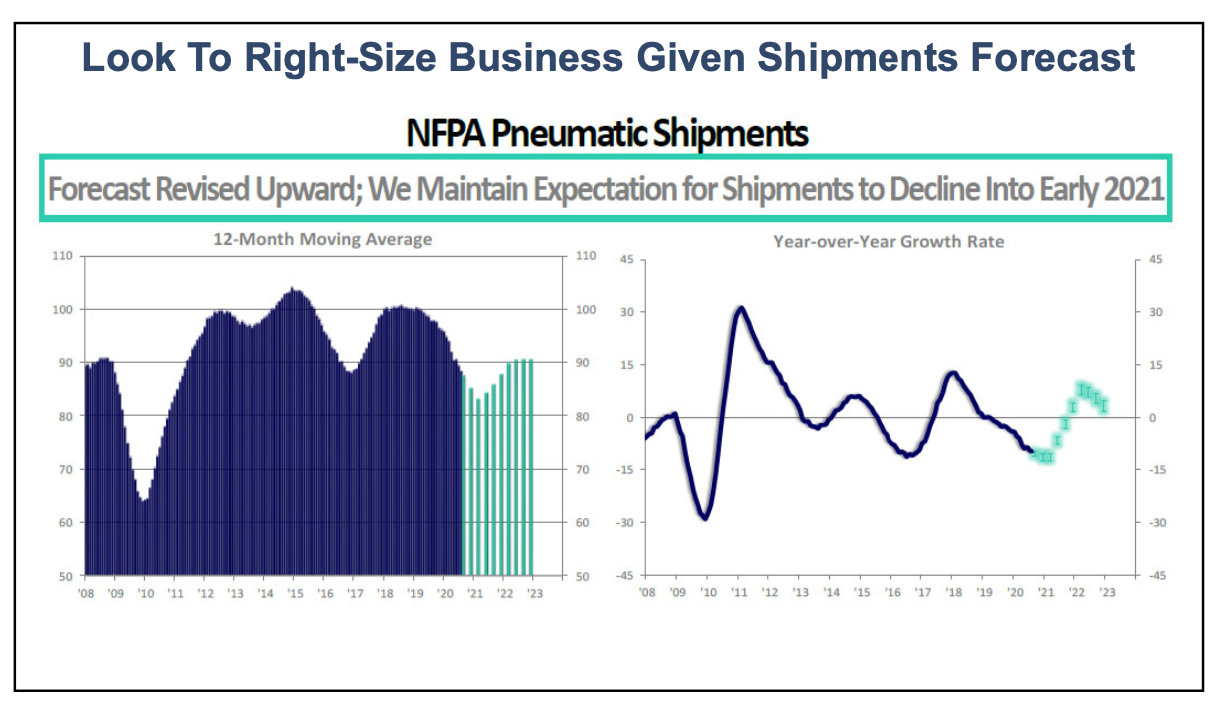 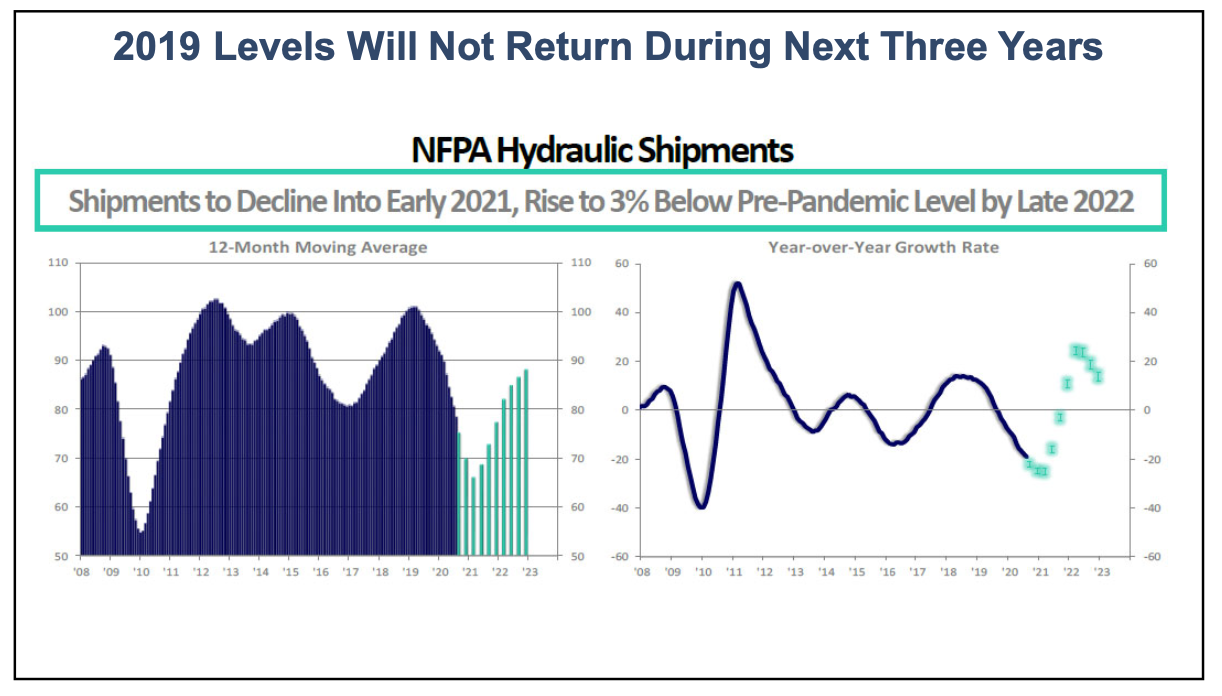 Recovery in hydraulics and pneumatics will not begin until next year, ITR is forecasting.

While the long-term forecasts are upbeat, there’s “not a lot of optimism as we move into the next few quarters,” Putney said.

As with pneumatics, hydraulics will likewise not reach its former peak levels of 2019. But its pace of rise will be more aggressive and will hit quicker than pneumatics. The rise in pneumatics will be “not as aggressive, not as steep,” Putney said.

In forecasting the recession to continue into 2021, ITR is encouraging companies to “right-size” their businesses, “to have your ducks in a row and brace for the aggressive rise that we’re going to be seeing when things start to turn around next year.”

Economists define “right-size” as a continual balance of a company’s total costs, asset investment and usage, debt, working capital requirements, and other related inputs required to profitably serve customers based on the revenue being generated.

Most end-use markets for fluid power products will remain in recession for the next two quarters, ITR forecasts. There are some exceptions, however.

The end-use markets of construction machinery production, industrial machinery new orders, and instruments production are already experiencing growth in the fourth quarter of 2020. Growth in these three markets is forecast to continue into the third quarter of 2022, according to ITR projections.

ITR also predicts growth through at least the fourth quarter of 2021 in production of light vehicles, motor-vehicle parts, and electronic components.

“Electronic components production will grow year over year for quite some time,” Putney said.

The electronic components market includes controls and automation equipment. Automation is helping growth because it diminishes the need for human labor, Putney said, and many businesses are “shifting out of human labor to automation and robots.”

ITR’s forecasts are based on some assumptions, Putney said. These include assumptions that governors will not shut down their states again, and the federal government “does not shutdown the country or otherwise hinder the economy,” she said.

Though the forecasts are down for the next few quarters, an upside is that “innovation often comes when business is down, when there’s negativity in the market,” Putney said.

And don’t expect the outcome of the presidential election to have an impact on the economy, Putney said. Rather, it’s the legislation that follows the election that has the greater impact, particularly regarding tax policy and immigration, Putney said, noting that it often takes 18 months for legislation to be implemented and start having an effect.

“The election does not move the overall needle,” she said.