Flow control valves influence actuator speeds in a fluid power system. Increasing or decreasing the opening to flow at a throttling point adjusts the flow to optimize the system performance. This flow at a throttling point may be calculated dependent on the type of orifice, pressure drop, and the type of fluid. The electronic proportional flow control is similar to standard two-port flow controls except the main control orifice is adjusted electronically. The control orifice has been modified to work in conjunction with a force-controlled solenoid. If the position of the spool is monitored with a feedback device such as a linear variable displacement transformer (LVDT), then a stroke-controlled solenoid is used to control the valve opening.

Specifically, a two-port proportional pressure compensated flow control valve has an electrically adjustable control orifice connected in series with a hydrostat (essentially a pressure-reducing valve), as shown in the illustration. 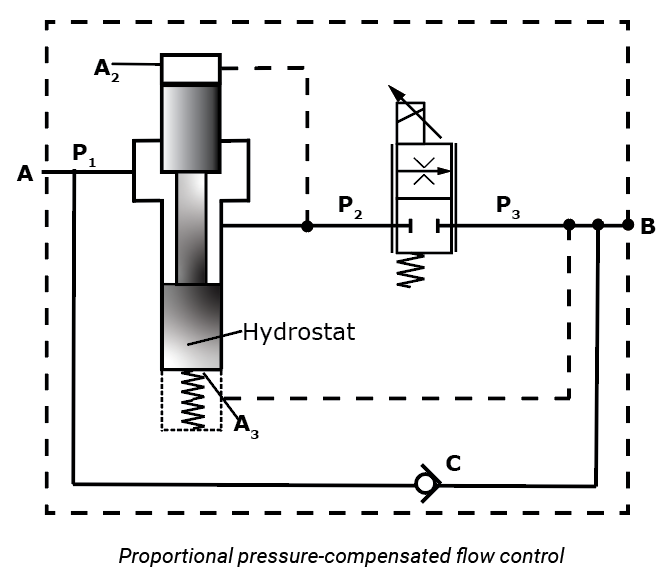 At the same time, the LVDT, if so equipped, provides the necessary feedback to hold position. In this case, the LVDT provides feedback to maintain a very accurate orifice setting.

The control signal provides time-controlled opening and closing of the orifice. For reverse free flow, a check valve may be built into the valve. Proportional flow control valves are available with either linear or progressive flow characteristics. The input signal range is the same for both. However, the progressive flow characteristic gives finer control at the beginning of orifice adjustment. In case of electrical power or feedback failure, the solenoid force drops to zero, and the force exerted by the spring closes the orifice. Typically, when feedback wiring is connected incorrectly or damaged, the system uses an LED to indicate the malfunction on the amplifier card.

Some flow control valves consist of a proportional-force solenoid and a pilot controller. Because this valve is relatively unaffected by changes in system pressure, it can open and close the orifice in the same length of time. This maximum time can be changed on the amplifier card by adjusting a built-in ramp generator.

An electropneumatic proportional valve is an open loop flow control valve that controls the flow rate in accordance with current through the coil. However, the system can incorporate a feedback loop as shown in the illustration of a circuit controlling the rpm of an air motor. 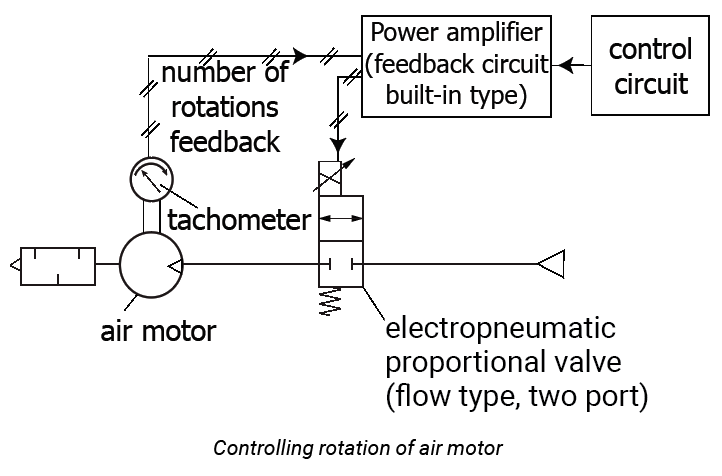 Under normal conditions, what directly controls the output rpm of the air motor?

a. Supply pressure to the electropneumatic proportional valve.

b. Flow rate through the electropneumatic proportional valve.

c. Dither level to the solenoid.

d. Restrictions in the muffler.

e. None of the above.

The correct answer is b.