No recession forecast until ‘26.

Amid anxieties about the war in Ukraine, inflation, and higher commodity prices, shipments of fluid power products are expected to slow this year, according to forecasts by ITR Economics.

ITR, which analyzes fluid power shipment activity for the National Fluid Power Association, forecasted in a March 22 webinar that the shipment slow down would continue through 2023 before rebounding in 2024.

“We’re just about at the cusp of the growth rate cycle,” said Eric Post, a senior economist at ITR Economics. “We’re going to see growth rates come down.”

Growth rates of fluid power shipments will drop in the second half of this year, he said, “and then [growth is] basically flat in 2023 relative to 2022. In 2024 we’ll see a nice rebound in the growth rate as the overall U.S. economy accelerates.”

The slowing of growth in fluid power shipments mirrors forecasts for the U.S. economy, Post said, noting that all of ITR’s leading economic indicators are in decline.

Although growth is slowing, ITR does not forecast a recession. Growth will be flat the rest of this year into the first half of 2023 before picking up in the second half next year and continuing to grow in 2024.

Elevated consumer spending, manageable consumer debt, and healthy savings will prevent a recession until 2026, ITR is forecasting. Overall, the economy is strong despite the pressures of inflation, rising prices, a clogged supply chain, and the war in Ukraine.

The next largest hydraulic market is agricultural machinery, at 14.4% of sales. After rebounding from a strike at John Deere last year, farm machinery and equipment are “a mixed bag,” Post said of the market. 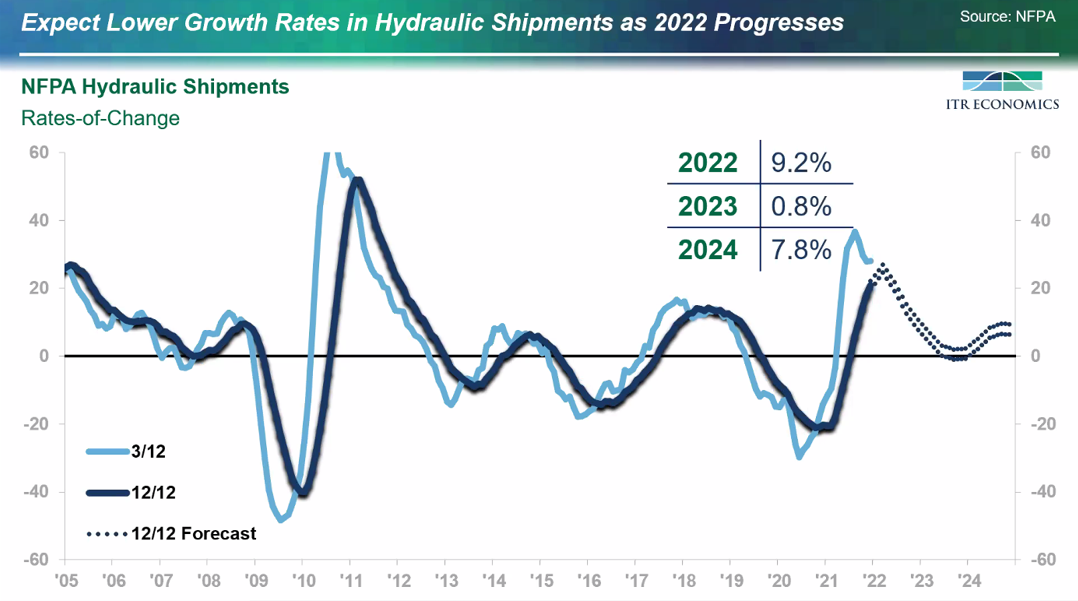 High commodity prices are making 2022 “a nice year,” though not exceptional, in farm machinery market. Post said ITR is expecting some near-term growth in the market.

Production in the North American light vehicle market is “suffering,” Post said, because of continuing supply chain difficulties, particularly the semiconductor shortage. Production is flat on a year-over-year basis, showing a 12-month production total of 12.8 million vehicles, which is low, Post said. Because prices are high and supply is low, expect a long recovery for the market.

The outlook for pneumatic shipments is similar to that of hydraulics, with quarterly growth rates declining. They will remain flat in 2022 and 2023 until shipments pick up in 2024, ITR is forecasting.

As with hydraulics, pneumatics shipments face difficulties due to the supply shortage in the semiconductor markets. ITR is expressing concern about a potential shortage of neon, which is essential to semiconductors, because Ukraine is the world’s largest producer of neon. The war in Ukraine points to possible neon shortages, further exacerbating the semiconductor shortage.

However, fluid power companies in the semiconductor market should not be discouraged, Post said.

“Overall, from a demand perspective, it’s still a great market to be in,” he said. “There will be no recession, just easing in the growth rates given the supply availability.”

Medical equipment and food-related products remain good markets for fluid power companies, Post said. While they are experiencing slowing growth rates, these markets can be good ones because they produce essential commodities and don’t track with the macroeconomy.

Still, some fluid power markets may see mild, short-lived recessions due to slowing growth rates this year and next year, Post said.

“You want to be aggressive in your thinking,” Post said. “Pricing pressures are going to ease, but don’t expect normal pricing.”

The decade of the 2020s will be “inflationary,” Post cautioned. But “inflation pressures are going to ease before the labor shortage goes away,” which is not disappearing “anytime soon.”

“We’re getting uncomfortably close to a million openings on an annual basis in manufacturing,” Post said.

The number of openings is “well above pre-COVID levels,” he said, noting that it’s the same for other sectors, such as warehousing, construction, and transportation. There’s simply too much demand and not enough workers.

“There’s a mismatch between what workers want and what employers want that’s leading to really high job-opening numbers,” Post said. ITR does not see the labor situation changing “very meaningfully” over the next few years. Post urged companies to be prepared for that reality.

The rates of employees quitting are coming down, he said, and that will moderate employment costs. But companies are wise to increase efficiencies because “you need to be able to do more with the same or fewer workers.” 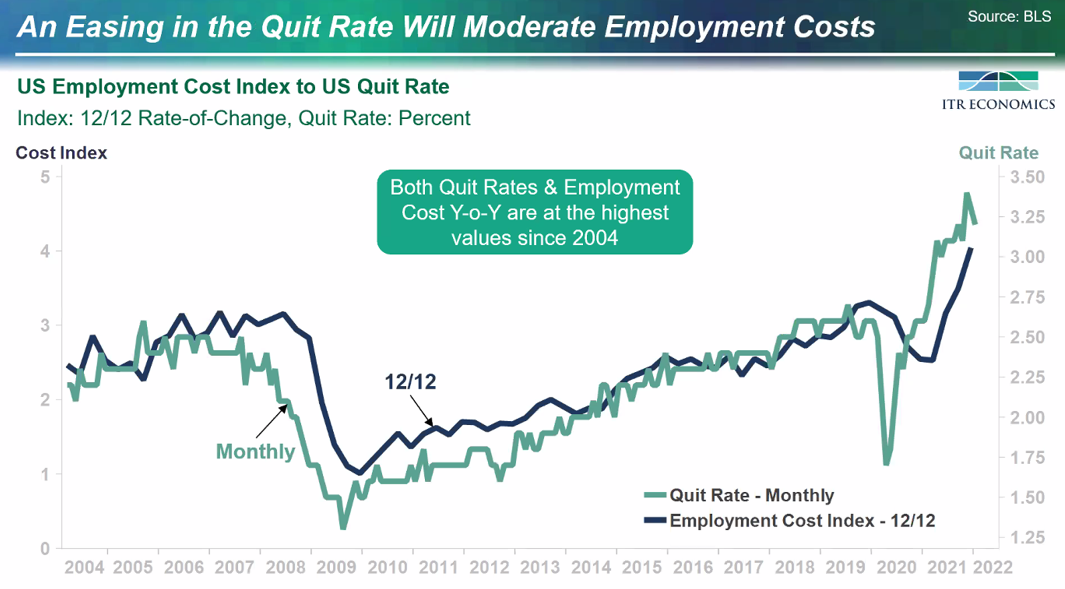 Employees have the power, Post noted, and work culture and retention are important.