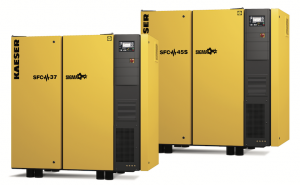 With the advanced SynRM motor-drive combination, these 50- and 60-hp units deliver flows from 54 to 275 cfm at 125 psig with superior part-load efficiency, longer service life and reduced maintenance costs. The available pressure range is 80-217 psig.

Developed in partnership with Siemens and specifically designed to work with Kaeser’s SFC models, the SynRM motor-drive combination achieves top tier IES2 classification. This results in better specific performance, especially in the part-load conditions that call for variable speed compressors.

SynRM motors do not use aluminum, copper or expensive rare earth metals in the rotors. Instead, they are made of electrical steel and feature a special profile. With this unique rotor design, the motors run cooler, resulting in lower bearing and winding temperatures and increased motor life. Because there are no magnets in the rotor, motor service is safer and easier.

With these new additions, Kaeser has improved reliability and energy efficiency across its entire range of variable frequency drive units in the SFC 18-110S (25-150 hp) series, according to the press release.