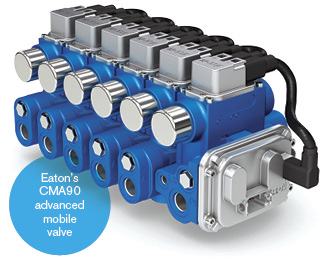 Hydraulic equipment is changing. As end users look to intelligent systems to improve machine performance without sacrificing the power density hydraulics provide, embedded sensors are becoming commonplace. These sensors allow equipment to communicate data about machine performance and even alert operators of problems so they can quickly be addressed.

This integration of electronic components has not come quietly to the industry. Traditional hydraulics has historically been viewed as reliable and robust. Electronics, fairly or not, has been perceived as less robust in harsh environments and more likely to require specialized knowledge for debugging and diagnosis. This can be particularly true if feedback from sensors is relied upon for baseline or safe operation, as a faulty sensor could render a machine inoperable.

The latest advances in sensor technologies have gone beyond a simple alert to build fault tolerance into machines. These fail-operational controllers offer some level of functionality in the presence of a sensor failure, which can reduce the real and perceived risk of downtime due to a failed sensor.

Take an intelligent independent metering valve with a twin-spool valve (see the image above for Eaton’s CMA valve as an example). This valve includes two types of sensors—one to measure pressure and one to measure position. The closed-loop control of the spool position enables fast performance with near-zero hysteresis, but also creates a reliance on the sensors for operation. If the pressure sensor fails, the machine is unable to request pressure from the pump or compensate for changes in the load, which can lead to a loss of functionality. If the load gets heavier while the pressure sensor isn’t working, for example, the machine may move faster than what the operator is prepared for. If the position sensor goes down, the machine will be unstable until the sensor can be repaired or replaced.

Typically, all four sensors are required to make the valve function. However, with the redundancy provided by the independent metering spools, only three of the four sensors are needed to provide the necessary information about the state of the valve.

Each of the valve’s two spools – operating independently of one another – control either the flow going in or the flow coming out of an actuator, with the valve sensors monitoring the position and pressure on each side. However, since the flow entering and exiting an actuator are related, there is one piece of redundant information between the four sensors. This redundancy can be used to develop fault-tolerant algorithms that use information from the non-faulty side to ensure stable control of the flow on the faulty side, allowing the valve to continue operation if one of the four sensors fails.

What is Limp Mode?

Typically, if a failure is detected on the valve, a shutoff is triggered, and the machine goes down until the valve can be serviced. Given the information provided by the redundancy inherent to independent metering valves, it is possible to develop fault-tolerant control algorithms – different for each faulty sensor – to enable a “limp mode” for the machine. In this mode, the valve is able to remain operational, doing some or all of the tasks it is meant to do while waiting for repairs to take place.

In testing, the CMA valve was installed on the boom of a backhoe loader. With a heavy load that could be damaging if dropped or otherwise uncontrolled, the sensor feedback was disconnected to replicate a failure. By reconfiguring the control algorithms depending on which of the four sensors fails, engineers were able to stop the machine from automatically shutting down when a valve failed, thus allowing operators to continue to use the joystick to steer the boom safely.

These fault-tolerant control modes can be configured to allow the machine to automatically stay on or to alert the customer that something is wrong and then request permission to stay on. In customer testing, no additional set up was required and a few instances of sensor faults went unnoticed by operators, who continued to control machines in limp mode without realizing the modes had switched.

When sensors fail, typically because the electrical signal has gone out of range, the valve reads which sensor is down and reports to the machine owner or operator’s computer. The failure will need to be addressed by replacing the pilot portion of the valve. While sensor technology is improving, these failures still occur, and any failure will require repair. However, with limp mode made possible by valve redundancy and unique control algorithms, machines can finish the job before the repair is required.

As the intelligence of hydraulic systems grows, so will the use of sensors, which add to machine precision, increasing productivity and improving safety. The additional diagnostics made possible by sensors make monitoring the health of the machine much easier. Sensors can be used to track the duty cycle, to coordinate automation of different modes, and the make the machine tunable. Nonetheless, the reputation of electronics and sensors as less reliable compared to traditional hydraulics has been a barrier to adoption of smart machines. With technologies like limp mode, Eaton is helping reduce the hesitancy to adopting these smart electro-hydraulic machine solutions.

About the Author: Michael Rannow is lead engineer at Eaton. He can be reached at michaelrannow@eaton.com. To learn more about Eaton, visit www.eaton.com.