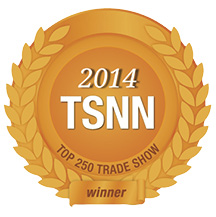 IFPE, the premier show for fluid power, and co-located partner of CONEXPO-CON/AGG at the Las Vegas Convention Center, was 135th on the list. IFPE boasted 161,550 square feet with 481 exhibitors and 97,091 attendees in 2014.

Other names familiar to the fluid power industry made the list as well, including the International Manufacturing Technology Show (IMTS) at number three and PACK EXPO International/Pharma EXPO at number four.

Priority space sales for 2017 IFPE are officially open. The deadline for applications is August 1, 2015. Past exhibitors receive this first opportunity to reserve space in 2017’s largest event for the fluid power industry. Exhibiting information can be found at http://www.ifpe.com/Exhibitors/.

Any questions may be directed to the customer service team at sales@ifpe.com.