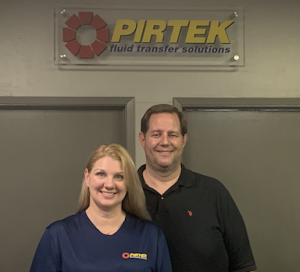 It is the second store for franchise owner Dan Currid, who opened PIRTEK San Leandro in February 2016.

With access to downtown San Francisco, the city of South San Francisco, located near the middle of the famous peninsula on the shores of San Francisco Bay, is home to many equipment rental companies, contractors, metal recyclers, and marine organizations that operate out of the nearby port, including the U.S. Coast Guard. All of these businesses rely on hydraulic systems and hoses to keep their equipment operational.

The new franchise – PIRTEK SFO – was originally what is known as a Tier 1 business under PIRTEK’s franchise structure, which requires a franchisee to have a full service and supply center staffed with six team members and at least two mobile-service vehicles.

When Currid took over the business, he temporarily converted it to a Tier 2. This option allows a franchisee to keep the inventory in a small warehouse or storage facility and lease two vehicles. While Tier 2 owners are expected to advance to a Tier 1 location within three years, they also have the option of bypassing this step to open as a Tier 1 model from the beginning. Currid plans to reopen a full brick and mortar location for the business as soon as possible, most likely next year.

Currid said PIRTEK SFO will allow them to provide even faster service to their existing customers and add new accounts as well.