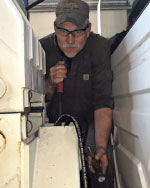 Profile Data: David Schneider is an IFPS certified Mobile Hydraulic Mechanic (CFPMHM) and Mobile Hydraulic Technician (CFPMHT), a former Accredited Instructor (CFPAI), and has a Train the Trainer (TEREX) certification. His career began 30 plus years ago at Isson (John-Deere) in Monico, Wis., where he worked in hydraulics by servicing and repairing construction and logging equipment. He then started working as a road technician for DUECO in 1984. Mr. Schneider began his own repair business, Dependable Service Hydraulics LLC, in September 2012, opening the doors to his first shop in December 2014. David Schneider can be reached at dshydraulics@me.com.

Why did you decide to enter the hydraulics field?

Northern Wisconsin had very few job opportunities in the early 1980s, and John Deere offered me a job upon getting an associates degree in Automotive Service. I enjoyed testing equipment after I worked on it and seeing what it could do. I have worked on engines, cylinders, pin and bushing track, rebuilds, radio-controlled units, construction equipment, logging equipment, concrete pumps, forklifts, self-propelled aerial lifts, track machines, cranes, aerial bucket trucks, and anything with wheels or tracks. The most unique piece of equipment I ever worked on was a 50-m concrete pump that had five booms with radio controls.

When did you start working on the road, and what was that experience like for you?

I started in 1986 while I was working at DUECO. Working on the road means dealing with a lot of extremes – the coldest temperature was 30 degrees below zero (70 below zero wind chill) working on a forklift; the hottest was 120 degrees in Texas working on a concrete pumper. I also worked under a track machine once fixing a pump in a 3-ft puddle. I generally drove about 300 miles a day and about 40,000 miles per year at least, if not more. The longest trip to a job driving was 400 miles one way.

What I enjoyed was and still is the challenge of fixing the trucks where they break down, and getting them back up and working wherever that might be. One example is when I had a bucket truck stuck in the air with a blown hose. The unit was on a transmission line five miles off a back road, and I had to have my service truck pulled through the right of way for the five miles. I have had to, on occasion, replace chains and cables on bucket trucks with no cranes, had to figure out ways to remove the upper boom cylinder to replace cables using leverage and blocks and tackles and jacks, and assure my safety and the equipment from being damaged. As a road technician, the one drawback I had was being away from home more than I liked while my children were growing up.

What are the biggest problems you encounter in this line of work?

Operator error, blown hoses, and safety switch malfunctions. The most complicated repairs deal with the electronics and electrical systems or the intermittent issues from contamination. One humorous example was when I had a truck that would shut off at break time every day, but because the crew needed the truck during their shift, I couldn’t work on it until afternoon. Unfortunately, I was never able to get the unit to act up when I was troubleshooting the problem. After this happened three or four times, I finally showed up right before break time. I noticed that the truck would tilt when the boom was brought down, and from the guys getting into the truck, the truck shut off. I then ohmed out a switch in the tail shelf to find water would bounce around in the switch and ground out the truck, making it shut off.

When did you decide to start your own hydraulics repair shop, and what have you learned?

I started thinking about my own shop about ten years ago, but with a young family at the time and the outlay of time and money, it was only a dream. What I have learned is because I am a one-man operation at this point, the biggest challenge is being able to do it all; from being the boss, the technician, the parts department, scheduling jobs and in charge of the administrative paperwork, it can be hard to juggle it all.

If you could change one thing about the hydraulics industry, what would it be?

Having engineers create portholes big enough for my arms! Also, making hoses that last longer by being protected from UV light and having units operate better on biodegradable oil in cold climates.

What advice do you have for individuals entering the hydraulics field?

It’s important to be careful around hydraulics under pressure and never get complacent about safety. Have a good understanding of how to read electrical and hydraulic schematics; if you can do that, you can figure out just about any problem. Know your customers on a personal level, and be honest about repairs and cost. Also, to work in the repair field, you need integrity and perseverance.

If you had to do it all over again, what would you do differently?

I would have gone to a technical school for hydraulics/pneumatics/electrical instead of learning by trial and error. For instance, in my early career, I once tried to pull a cylinder apart and found out it would not come apart until the pressure was released.

What is one of the biggest changes you’ve seen in the industry?

In the early 1970s, radio controls were tried and they were very unreliable; with today’s new electronics and integration into hydraulics, the reliability of electronic controls and radio controls is fantastic, and so is the ability to interface with a truck’s computer to control functions remotely. Some companies have the ability to troubleshoot equipment from an office that is hundreds of miles away.