Raising the bar: I Just Need a Moment

I was reviewing a recent article in Fluid Power Journal and came across the term “moment” followed by a parenthetical note indicating that it was equated with torque. So I got to wondering what the difference is between moment and torque, if any. And if there is no difference, why have two different words for the same thing? And, by the way, what is “moment of inertia”?

Here are some definitions.

Moment. The concept of moment in physics was first brought to light by the great inventor and mathematician Archimedes. While researching levers, he found that applying a force on a lever arm produced an increased force at the point where the lever arm pivots. He wrote about the principle of this increased force.

In 1565, his work was translated into Latin, and this force at the pivot point was called momentorum, the mover. The word in English and was used to indicate an event that brings about an important result, as in a momentous occasion. The concept then began to include something that occurred quickly, leading to the current usage of “moment” to mean a short period of time. 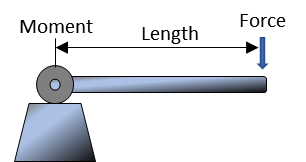 Torque. Torque refers to a rotational force and is calculated as force applied at some distance from a pivot point. It is most often described in Newton/meters (Nm), inch/pounds (in./lbs.), or foot/pounds (ft./lbs.).

Wait a second! Isn’t that exactly how moment is defined? Well, sort of.

Inertia. The 17th-century scientist Galileo introduced the concept of inertia, noting that an object in motion eventually stops due to friction. Later, Isaac Newton described inertia this way: “In the absence of external forces, motion in a straight line and at constant speed continues indefinitely.” In other words, it takes effort to start something moving and effort to stop it. Inertia is simply the characteristic of any object to keep doing what it is doing. If it is stopped, it wants to stay stopped; if it is moving, it wants to keep moving. It stays stopped or moving until something makes it change.

Moment of inertia. We have established that moment is a rotational force. We have also established that inertia is the resistance to any change in state. So, the moment of inertia is the rotational force equal to the resistance of the object to rotate. It is an acceleration formula and is calculated by multiplying the mass of the object by the square of the length to the center of gravity. I = ml2 where I is inertia, m is mass, and l is the length to the center of gravity. A force greater than the moment of inertia causes an angular acceleration (it makes it spin).

Knowing the moment (the magnetic force holding the load) along with the dimensions and mass of the load enables us to determine the maximum acceleration of the load and consequently the minimum travel time to the end of stroke.

So when you are asked to size a cable cylinder to move a load, tell them you just need a moment.