When LVDT signal cables are bundled together or laid close to each other in a wire trough, even for short distances, the result can be a mutual interference phenomenon called “heterodyning” (or “beating”). This effect is created when the frequencies of the oscillator in the individual signal conditioner driving the excitation signal to each LVDT differ slightly. Since the signal cables are close together, there can be capacitive coupling among them, resulting in very low beat frequency signals that are the difference between the frequencies of the individual oscillators. The beat frequency signals can ride on the DC output of the LVDT signal conditioners, appearing as low-frequency ripple or noise with a period measured in fractions of a second, or as a repetitive slow drift with a period of many seconds. When a pair of LVDTs is used together for redundancy, this effect may be evident on only one channel of the system, but in systems with larger numbers of LVDT channels, this effect may be found in one or more channels, depending on many factors like cable length and layout, as well as shielding and grounding.

The typical way to solve this beat frequency problem in multiple-channel systems is to create a “master oscillator” by using the oscillator from one of the signal conditioners to supply the same excitation frequency to all of the LVDTs. The oscillators in the other LVDT signal conditioners are overridden by the master and operate as “slaves.” The idea is that there cannot be any beat frequency interference if all the LVDTs are operating at exactly the same frequency. 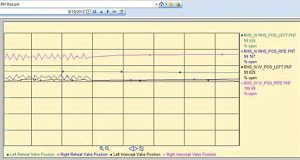 Table 1 (Click image to enlarge) shows an example of the drifting over time resulting from a beat frequency on the left side of the graph. The waveform in the output was noted in the right-hand reheat and stop valve hydraulic cylinder-operated valve positioners that were using dual-redundant LVDTs for valve position feedback to the steam turbine control system in a power plant. On the right side of the graph, the beat frequency effect was eliminated by utilizing the master/slave function, and the waveform flattened out.

The master/slave approach works quite well, but has a major drawback because the “redundant” system is no longer fully redundant. The system is now dependent on one oscillator in one signal conditioner to supply all the LVDTs with the proper excitation frequency. If the master fails, two things could happen: either the other channels stop operating, or they revert back to their original oscillator frequencies and the multiple-channel DC outputs now display beat-frequency-produced noise, ripple, or output drifting. Many companies offer LVDT signal conditioners with a master/slave function, but they all are fully susceptible to this particular beat frequency problem if the designated master oscillator falters or fails.

Alliance Sensors Group (ASG) gave very serious consideration to this beat frequency problem in multiple LVDT installations and developed a successful solution to the problem that is incorporated in its Model S1A LVDT signal conditioner. Because the S1A module and its variants include a digital address for RS-485 communication capability, ASG is able to use this digital feature to maintain full redundancy in multiple LVDT systems. If the “master” were to fail, another master having a different digital address would immediately come on stream to maintain a single excitation frequency. With this approach, the only thing lost from a master oscillator failure is the original master channel itself. For multiple-channel LVDT systems, the integrity of the output signals from the other channels is fully maintained. This “auto-mastering” feature is unique to Alliance Sensors’ S1A LVDT signal conditioner module and its variants.