The Function of Fluids

A hydraulic system has components with close moving parts. The hydraulic fluid is used to lubricate the rotating or sliding surfaces. The fluid also functions as a seal within the components to minimize internal leakage. Microscopic particles are continually being generated within the system 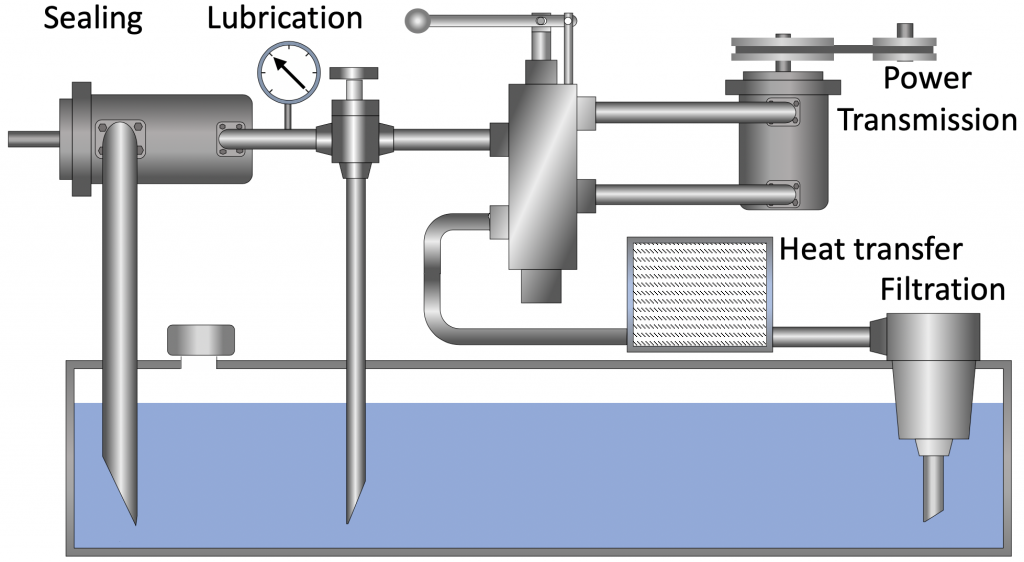 as surfaces move past each other. If these particles are not removed, they will generate even more particles. The hydraulic fluid carries these particles away to the filtration system for removal. Heat that is generated by the inefficiencies of the system must also be carried away to where it can be removed (see figure 1). 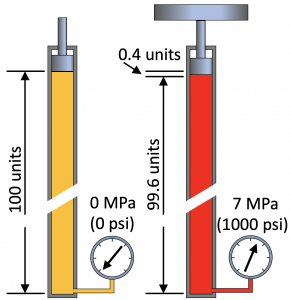 Viscosity and lubricity.  These are two very different but important characteristics of hydraulic fluid.Viscosity is the resistance to flow at a given temperature. As the temperature of the fluid rises, the viscosity decreases. As the temperature lowers, the viscosity increases. In a hydraulic system, the most important fluid property is viscosity. Manufacturers publish the minimum and maximum viscosity range that must be maintained during operation, and information is typically presented as a maximum viscosity for cold start-up and then a minimum viscosity that must be maintained during normal operation.

Lubricity is the ability to minimize wear by creating a film between two mating surfaces, which allows them to slide past each other without touching. For hydraulic fluid to perform the lubricating, sealing, and heat transfer functions, both viscosity and lubricity must be considered. A fluid with good lubricity but low viscosity may not be able to establish a sufficient lubricating film between mating parts or provide sealing for sliding spools.

Rust and corrosion inhibitors. These additives prevent moisture and air from forming iron oxide particles (rust) by putting a coating on metal surfaces.

Antioxidants. Oxidation is a general term describing a chemical process where an atom gives up an electron. Rust is a form of oxidation, but it is not the only form. The presence of moisture or air, both of which contain oxygen, can cause the deterioration of components, including the hydraulic fluid itself, especially when accompanied by high temperature. The addition of antioxidants by the refiners is meant to minimize this damage.

Demulsifier. This additive helps the hydraulic fluid separate water.  With many hydraulic fluids, the water then settles at the bottom of the reservoir, where it can be periodically drained away.

Detergents. These are added to the fluid when it is desired to prevent buildup of sludge and varnish deposits, as they tend to hold contaminants in suspension.  They also have excellent emulsifying ability, and that can be a problem because any water won’t be separated out of the fluid.  This may be beneficial in some mobile applications, but caution should be used, as detergents may also cause foaming in the fluid as well, which is detrimental to the system operation.

Anti-foaming: These additives reduce the fluid’s ability to retain air, which then reduces the potential for foaming to occur.

Hydraulic fluid is formulated to meet specific applications. There are formulations and additives that help the fluid meet the requirements of the system and the environment. There is no “one fluid fits all” formula.  Consequently, it is never a good idea to mix or switch hydraulic fluids without the equipment manufacturer’s consent. The makers of hydraulic pumps and motors often specify the characteristics of the fluid their products must have to remain under warranty. 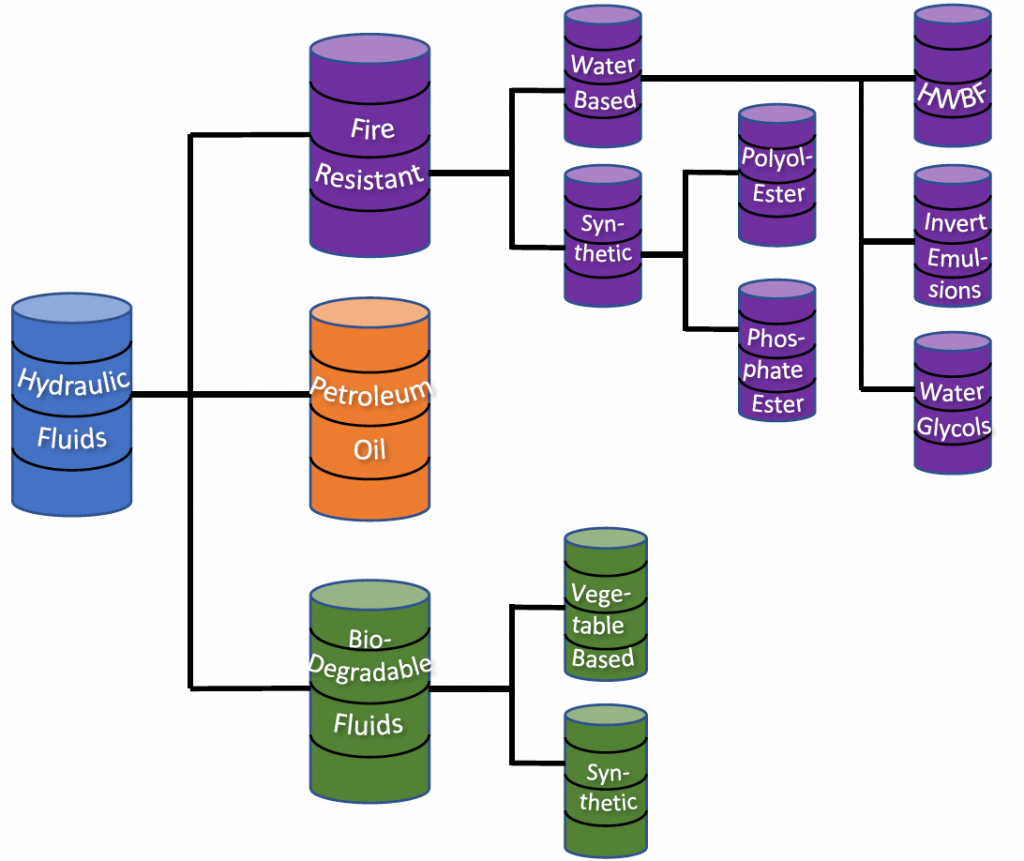 Petroleum (hydrocarbon)-based. These are the most common hydraulic fluids. Petroleum-based fluids have excellent lubricating properties, acceptable viscosities, and if properly maintained, have an excellent life expectancy. Petroleum oil dissipates heat reasonably well under proper operating conditions and is compatible with most sealing materials. If the temperature is held below 60°C (140°F) and the oil is kept free of contaminants, petroleum-based fluids are long lasting and stable. For every 10°C (18°F) rise in temperature above 60°C (140°F) accelerated oxidation will begin to occur, which may result in cutting the usable life of the fluid in half.

High water-based (HFA). ISO classification HFA is 95% water, which means it is highly fire resistant. However, it will lack the lubricity factor of a petroleum-based fluid.

Oil-in-water emulsions (HFB). ISO classification HFB calls for approximately 40% water. Due to the water content, they are somewhat fire resistant. However, the oil content is a higher percentage (60%) than the water, so there is a possibility for the fluid to burn if it is sprayed toward open flame or if the water is evaporated away.

Water glycols (HFC).  ISO classification HFC water glycols offer excellent fire resistance. Generally, they fall in a 60% HFC glycol (glycerin, alcohol, and thickeners) 40% water or 65% glycol 35% water. Glycol is in the antifreeze family and therefore can be utilized at cold temperatures. High operating temperatures (above 130ºF) may cause evaporation of the water, which would cause the glycol to become more viscous.

Biodegradable. These fluids are typically non-toxic and easily disperse in the environment. Some are formed by using readily renewable bio-based vegetable oils such as rapeseed and sunflower. They are then blended with special additives to give them the properties required in hydraulic system operation. They are very sensitive to heat and must be operated within a recommended temperature range. Some synthetic fluids are also engineered to be biodegradable.

Seal compatibility. It is very important that the seals within all components in a hydraulic system be compatible with the fluid being used.

As shown in the table in figure 2, different materials used for seals have different advantages and disadvantages depending on the type of fluid selected. Some fluids with very good lubricity and viscosity characteristics may prove caustic to the material in pumps, actuators, or valves, especially when hot.

Chemical compatibility is an important consideration when choosing the hydraulic fluid for the system. The inner tube of the hydraulic hose must not react chemically with the fluid. The same can be said of the seals within the components. Water can adversely affect the seals, so special seals must be applied to use a high water content-based fluid. Water glycol fluids attack zinc, cadmium, and aluminum, so these elements must not be located anywhere in the circuit to prevent contamination and deterioration of the hydraulic systems. 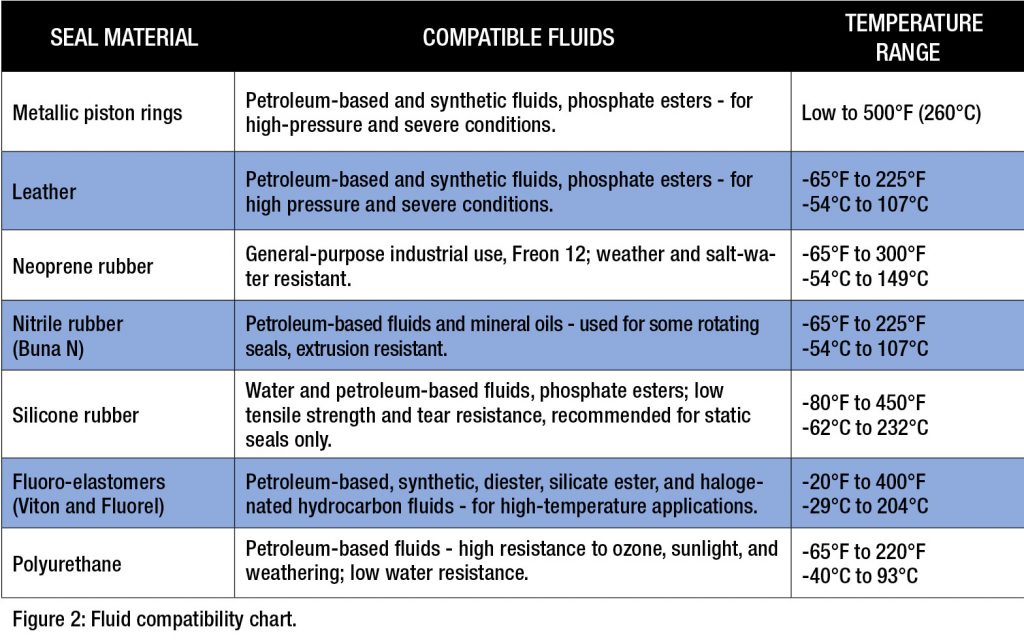 1. Which of the following is not a
function of hydraulic fluid?

2. The viscosity index (VI) is used to

a. describe the lubricating qualities of the fluid.

b. determine how much water is in the hydraulic fluid.

c. indicate the relative change in viscosity with changes in temperature.

d. indicate the point where the fluid loses its lubricity.