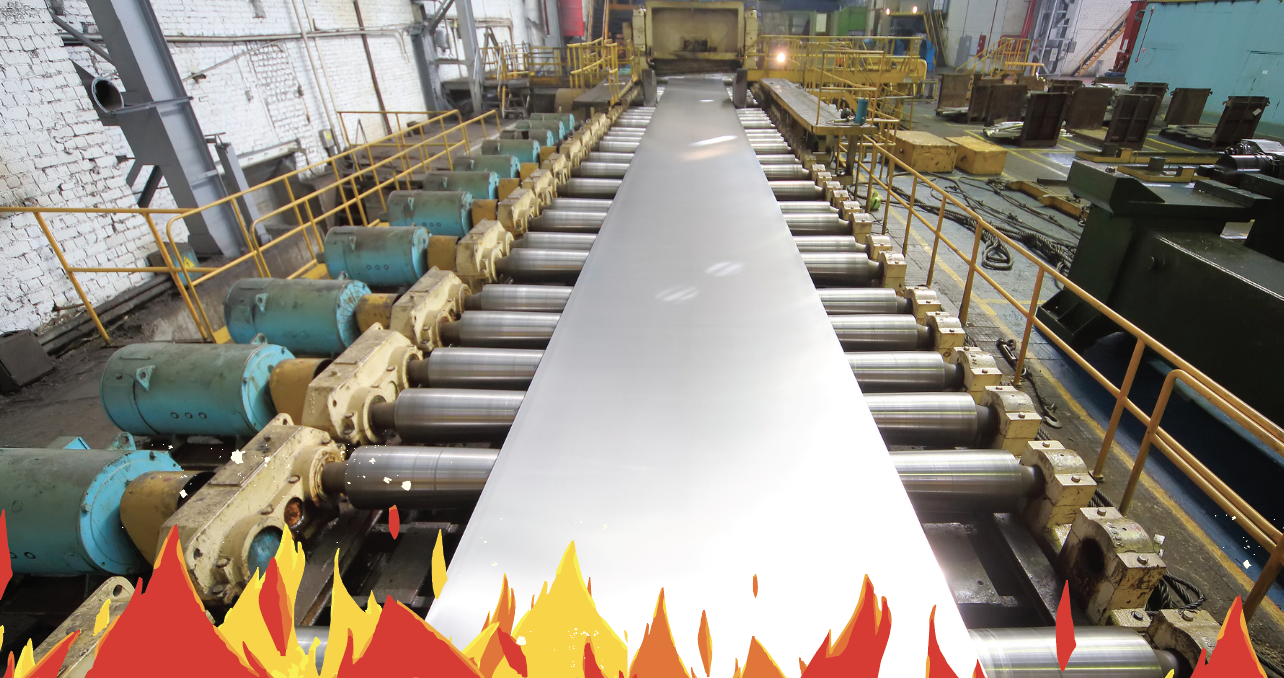 Whatever the manufacturing facility, a fire is among the worst accidents that can take place. The most obvious harm is the death or injury of employees. Beyond that, there is always likely to be a loss in both capital and production. These losses not only include damage to the building and equipment but also the immediate interruption in production, which might see lines idle for days or even months.

Such dangers are inherent within the aluminum production and manufacturing process, given the fundamental requirement for significant heat to produce the finished products. Fire hazards at just about every stage of the process requires a “safety first” approach throughout. Beyond the obvious approaches toward cooling, eliminating oxygen, removing fuel, or breaking potential chemical reactions, there’s one aspect that is relatively neglected: the use of combustible hydraulic fluids across the factory.

Studying a heat map of the operation will show how temperatures in many areas can reach between 400°C (752°F) and 700°C (1292°F). In most of these processes, hydraulic units are used to operate the equipment.

A mineral-oil-based hydraulic fluid is often chosen to operate these hydraulic units, a choice based on the definite advantage of a good cost-performance ratio. Yet a clue to the danger lies in the name: such fluids are a distillate from crude oil and not always the safest choice due to their tendency to catch fire easily.

Consider where hydraulic fluids are used and might come into contact with hot surfaces or materials, and you’ll quickly realize that many fire hazards exist in aluminum plants. This includes areas such as the heating or melting furnaces, billet or slab casting, or hot strip mills.

For example, most furnaces in the aluminum industry are operated using hydraulic power for moving the slabs and for opening or closing doors. And around an aluminum hot strip mill, several processes are driven by hydraulic power, like the automatic gauge control system. The presence of hydraulic hoses or components near a hot slab or aluminum strip is a clear risk, with the potential to cause uncontrollable fires if a hydraulic hose bursts or leaks, resulting in significant damage or downtime.

It is the ignition of mineral-oil-based hydraulic fluids that can lead to a fire. There are two main causes for this type of ignition: firstly, where the lubricants spill or leak onto a very hot surface and, secondly, when hot liquid metal or sparks land in a pool of lubricant.

The problem is that the mineral oil evaporates easily and tends to build a vapor of oil droplets. Once ignition takes place, these oil droplets can catch fire and result in an explosion or fire ball. The resulting fire can travel quickly to the roof or to cables and ignite other areas of the factory, making it hard to control.

The science behind the ignition is simple but has worrying implications. Essentially, a hydraulic fluid derived from mineral oil combines three chemical properties which, in conjunction, make a fire more likely: a relatively low specific heat, a relatively low auto-ignition point, and a high heat of combustion.

In other words, it does not take much energy to heat mineral-oil-based lubricant to the temperature at which it will auto-ignite, which is also relatively low. At that point, the fluid combusts at a heat of about 43-44 kJ/g, causing a swift catalysis for explosive ignition and propagation of the flames. The mineral oil’s properties also mean it has the ability to keep itself burning.

Fortunately, there are alternatives to mineral-oil-based hydraulic fluids, but make a careful analysis of their relative properties before choosing a replacement. The first consideration, of course, is the level of fire resistance. The term “fire resistant” is often thought to mean the same as “fire retardant,” but they are not the same thing. Almost all fire-resistant hydraulic fluids will burn under certain conditions.

So why choose a lubricant that is only fire resistant rather than fully retardant? Other factors come into play here. One obvious point of difference is the cost of switching to an alternative hydraulic fluid. Some will likely be more expensive than others, not only in the actual fluid price but in the potential impact on existing equipment. Component life and operational reliability may need to be changed to suit a change in fluid. Consider instead the total cost of operation, comparing both upfront and ongoing costs to the long-term value derived from reduced fire risk.

The other element to investigate is the environmental impact of any hydraulic fluid. This might refer both to how a lubricant is sourced or manufactured, whether it is biodegradable, or whether any harmful chemicals are released on combustion.

By triangulating these often-conflicting demands – cost, environmental impact, and level of protection – along with system reliability, it is possible to strike the optimum balance to protect productivity and profitability while managing an appropriate level of risk. If in doubt, it’s worth investigating the most common and generally accepted tests for fire resistance. 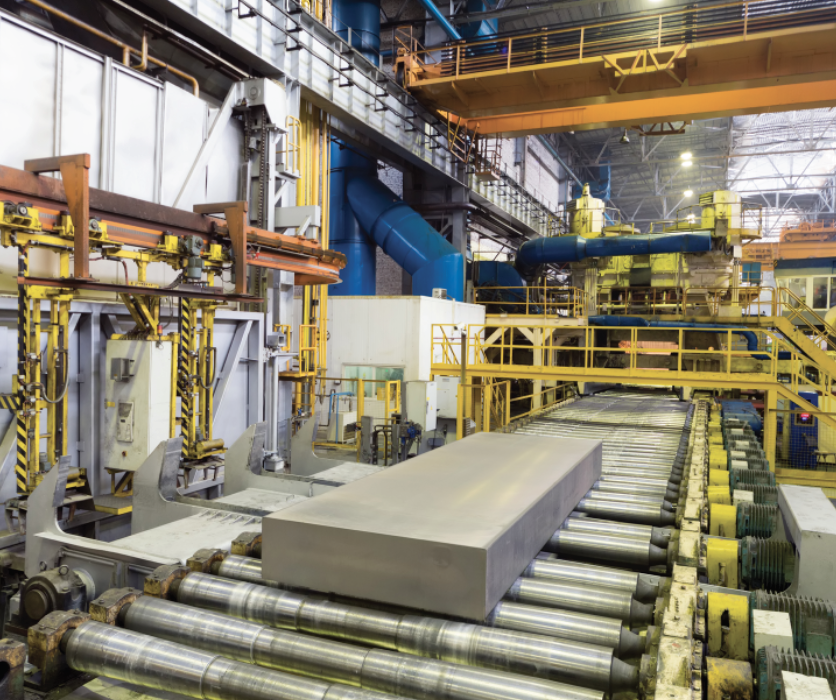 The basic distinction in choosing a hydraulic fluid is whether it is water-based or water-free. For each fluid type there are pros and cons. Procurement specialists and maintenance managers should consider the merits of five types.

HFA-E and HFA-S fluids are used in special hydraulic systems and are generally not found in the aluminum industry.

How do the other fluid types stack up in comparison?  HFD-R, the phosphate ester-based lubricants, have a negative reputation. HFD-R fluids are fire resistant by chemistry, but they are reported to be carcinogenic, mutagenic, reprotoxic materials. Also, the combustion fumes they produce may be neurotoxic. HFD-R fluids can be 10 to 15 times more expensive than mineral oil and need to be carefully maintained as these products generate aggressive acids as they age.

Of the remaining water-based fluids, both have good fire-resistant properties, meaning that other criteria also need to be considered. HFC fluids, the water glycols, are widely used in aluminum processing as well as other industries. They represent about 50% of the total fire-resistant hydraulic fluids market. Their high water content makes them good for fire resistance. But while they are comparably priced to mineral oil, they do not measure up in performance attributes. Additionally, hydraulic units for HFC are more expensive to purchase, the components typically have a shorter lifetime, more fluid management is needed, and energy consumption is 10% to 20% higher compared to mineral oil or polyol ester-based fire-resistant hydraulic fluids.

That leaves HFD-U, the polyol ester-based fluids, which may be the best solution and alternative to mineral oil. Typically no changes need to be made to the hydraulic unit when converting from a mineral oil or water glycol hydraulic fluid to a polyol ester fluid. Compared to mineral-oil-based fluids, nothing is sacrificed in terms of the fluid’s performance, and HFD-U fluids have reduced environmental impact.

The actual price of fluids is around two to three times more expensive than mineral oil. But the crucial difference is that HFD-U fluids have a higher specific heat, a higher auto-ignition point, and a lower heat of combustion. There is no vapor or explosion, so a fire is limited to the place where it comes in contact with the hot surface or ignition source, and the situation remains under control. With this reduction in the risk of fire from the hydraulic fluid, the result is a lower total cost of operation and a much safer work environment.

When considering how to reduce the fire risk from hydraulic fluids, there are several schools of thought. A factory might change design of the hydraulic unit to avoid mineral-oil leakages getting close to the hot surface. This means the company can keep the same oil technology, but it does not avoid using a straight hydraulic oil coming close to hot surfaces.

Others might prefer the installation of a fire-extinguisher system to avoid having to change the type of oil used, but this is not only expensive, it can be too little too late, as the main danger caused by oil-based lubricants is the initial explosive ignition and resulting fire balls.

Swapping a mineral-oil-based hydraulic fluid for an HFD-U type is one of the surest ways to improve safety. Factoring in its strong performance and good environmental credentials, HFD-U fire-resistant hydraulic fluids help factories run efficiently and safely.