Understanding The Characteristics of Pressure Regulators 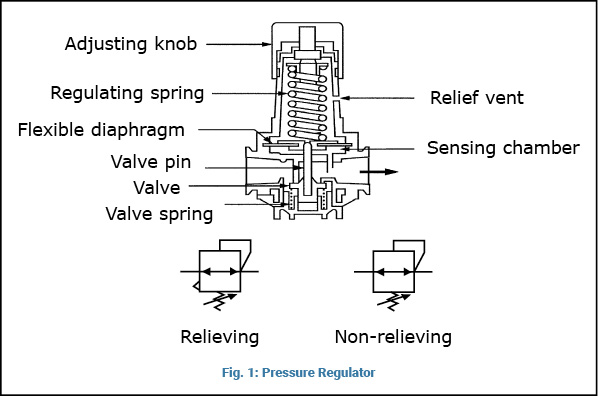 Non-relieving pressure regulators throttle the flow of toxic or flammable gasses, which would cause a hazard to personnel or property were they to be vented to atmosphere. Even the venting of an inert gas, such as nitrogen, is a hazard if it is vented into an occupied area, because the nitrogen could displace oxygen to a level below that necessary to sustain life. As with relieving regulators, pressure is sensed on the downstream side of the regulator. If the pressure setting is reduced, or the downstream pressure increases for any reason, the over-pressure gas will not vent to atmosphere. No gas is lost from the circuit.

Precision: Standard grade regulators will maintain the control pressure within two to five psi during normal operation as the air flow demand varies. A precision regulator will maintain the pressure with variations of less than 0.5 psi. The precision regulator will constantly bleed off a small amount of air to keep the flow valve open and active. It also insures that any back pressure is bled off immediately instead of having to increase the pressure above the setting to open the vent of a relieving style regulator. The precision regulator would be used in applications where the need for extreme pressure accuracy, such as a tension control for a paper roller, outweighs the cost of a small continuous air bleed.

Safety and Energy tip: To prevent over pressurization that may damage the machine or create a safety hazard, a tamper resistant or lockable regulator should be used. The lock can also prevent arbitrary increases of the pressure setting, which would result in excess air being wasted.

A vacuum breaker is different from a vacuum regulator because it allows atmospheric air to enter the process line. The result is that the vacuum pump will have to remove additional air to increase the vacuum.

Energy tip: Excessive pressure drops can be observed on a regulator gauge. If they are observed, investigate the root causes and correct. Common causes are clogged filters or undersized components.

Electropneumatic regulators, like the one shown in Fig. 2, are used in applications that will benefit from adjusting the air pressure based on the machine functions. The electropneumatic regulator typically has two solenoid valves that are connected to the process line. One of the valves is supplied by the main air supply. The other valve connects the process air line to exhaust. The regulator will maintain the control pressure proportional to an electrical control signal. If the pressure is below the setting, the valve on the inlet side opens to allow supply pressure into the process port. If the process pressure is above the setting, the exhaust valve will open to allow the process air to escape. 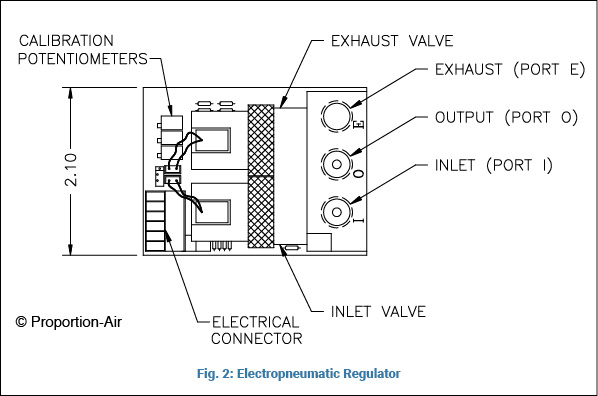 Energy tip: Using the least amount of pressure to accomplish the task is recommended. Avoid the temptation to increase the regulator setting. 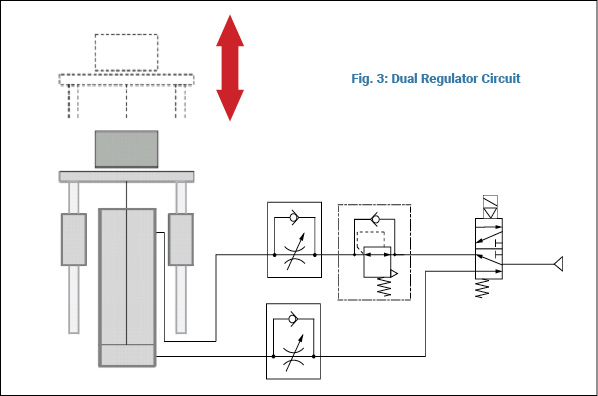 Energy tip: Generally, if the non-working stroke can operate at half of the working pressure, the energy savings will be approximately 25% per cycle.

1. Which one of the following gases would use a relieving regulator for pressure control?

2. For an application that requires continuous pressure adjustment, such as a tensioning function, which regulator would be best suited?

What are the correct solutions?

4 thoughts on “Understanding The Characteristics of Pressure Regulators”