Imagine this: You have been filtering 30 gallons of hydraulic fluid in off-line filtration with staged 5- and 1-micron filter elements at a processing rate of 5 gallons per minute (300 gallons per hour). You have been using a light-blockage method (LBM) automatic particle counter to verify the fluid cleanliness. The starting cleanliness per ISO 4406:2017 was 25/22/15. After eight hours, the cleanliness has only dropped to 22/20/13. You’ve checked that the filter element is not clogged and not in bypass. You even went through the trouble of making sure there was an element actually in the filter. How is this possible? What you’re likely experiencing is a classic case of “phantom” particle counting.

Phantom particle counting is a documented problem with laser particle counters that use LBM to verify the cleanliness of petroleum-based fluids containing certain insoluble additives. Silicone-based antifoam agents are common interferents. Fluids used in mobile fluid power systems are typically formulated to contain high antifoam concentrations. Research has suggested that through differential surface tension, the silicone antifoam additive agents adhere to the inner wall of microscopic entrained air bubbles, resulting in micelle-like encapsulations of the additive agents that then take on the apparent shape characteristics of a water droplet. The micelle-like antifoam agent encapsulations typically range from 4μm to10µm in size. Once the encapsulations rise to the fluid surface, the agents quickly pierce the air bubble and return back into the fluid. In a related study of the effects of a variety of nonsolid contaminants and additives on LBM particle-counting accuracy, it was found that a base stock mixture containing 0.02% (by weight) of a silicone antifoam agent increased the particle count by a minimum factor of three. The erroneous particle accounts were particularly evident in the 4µm and 6µm channels of the ISO 4406 cleanliness standard.

Because of this fundamental operating principle, LBM particle counters suffer from a key drawback: the inability to discern solid contaminates from other contaminates like water, air bubbles, phantom particles, and so on. So how can the phantom particles be overcome using automatic particle-counting technology? There is an alternative solution. 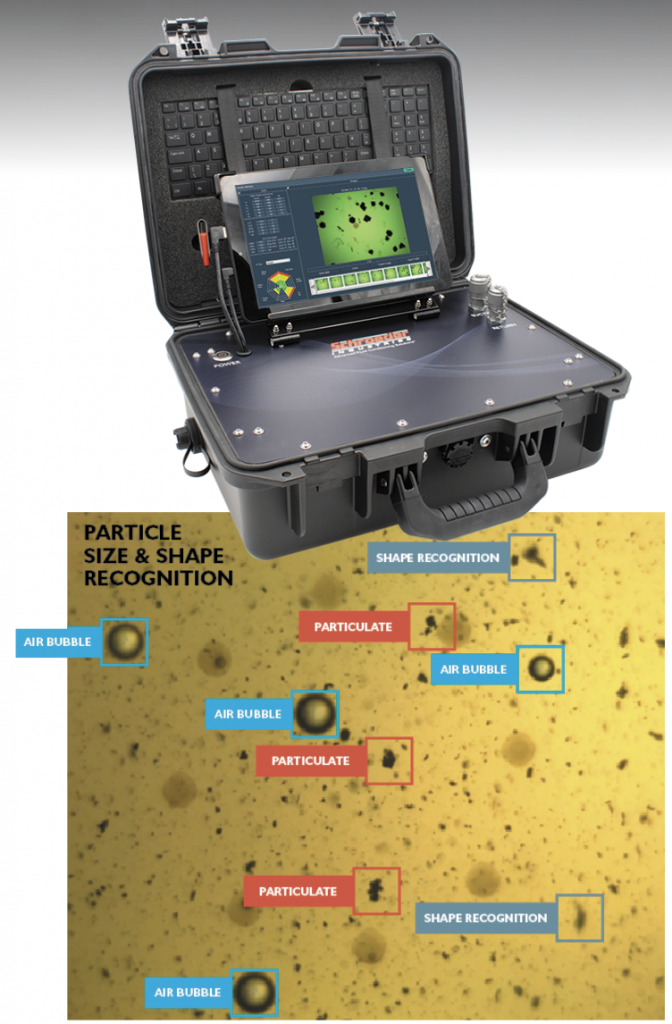 It’s no secret that understanding fluid cleanliness is imperative for strategically maintaining fluid-powered and lubricated machines. Automatic particle counters using LBM are generally considered reliable solutions for fluid-condition monitoring. However, LBM particle counters can yield inaccurate measurements while processing fluids that are contaminated by water, entrained air, or high levels of certain additives. Silicone-based antifoaming agents are common, well-documented additive interferents that become encapsulated within entrained air bubbles and lead to phantom particles, which are indiscernible by LBM particle counters due to their fundamental principle of operation. Research suggests that phantom particles can lead to LBM particle-counter measurements three classes higher than the true cleanliness per ISO 4406. While they can be filtered out, the additives that can lead to phantom particles serve important, specific functions and should not be removed or sacrificed. An alternative solution to LBM automatic particle counting, the direct digital imaging method uses size- and shape-recognition technology in tandem with advanced data-driven algorithms to distinguish solid contaminates from nonsolid contaminants like water droplets and air bubbles. Because of the apparent water droplet-like shape characteristics of the antifoam encapsulations, direct digital imaging solutions such as the TFH can indirectly negate the phantom particle counts and provide more accurate fluid cleanliness measurements.

An OEM of large off-highway equipment was experiencing continuous particle-counter inaccuracies at a verification stage of assembly. The rejections due to fluid condition were mounting, causing delayed shipments and significant related costs. The average holding time delay due to rejection was seven days and incurred a holding cost of $1,500 a day per unit. At the consultation phase of the case study, eight units had been delayed.

The diagnosis was in: the existing light blockage-type particle counters were providing inconsistently high and erroneous particle counts. The ISO 4406 cleanliness would frequently measure 23/22/19, despite a strong fluid-maintenance and conditioning regime. Third-party fluid analysis reports and fluid datasheets suggested that the synthetic hydraulic fluid contained a high concentration of a siloxane (silicone derivative) antifoaming additive known to cause phantom particle measurements in LBM automatic particle counters.

Schroeder Industries provided an extensive on-site demonstration that proved the advanced direct digital imaging technology of the TFH portable fluid-contamination monitoring solution, which measured an average ISO fluid cleanliness of 15/14/10, allowed the customer to successfully process the fluid and pass six units during the first day of demonstration. The two remaining backlogged units passed early on the second day of demonstration. The realizable savings evidenced by the demonstration equated to approximately 35% in cost savings and an 81% reduction in holding time.

Similar to case study 1, an OEM of mobile equipment was measuring unusually high particle counts with an LBM particle counter after switching to a new hydraulic fluid type with a higher concentration of an antifoaming additive. Coincidentally, the fluid type was nearly equivalent to that used by the off-highway equipment OEM. According to the customer, the average particle count of four samples of fluid collected from the customer’s well-conditioned bulk fluid storage measured 25/23/20, as shown in table 1. 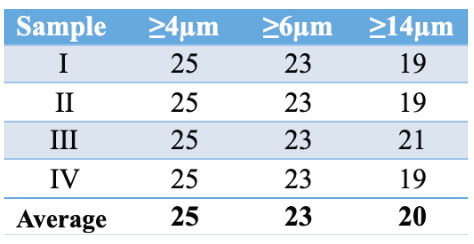 Table 1: Sample cleanliness results of fluid containing a high concentration of antifoaming additives according
to ISO 4406.

After consulting the customer of the phantom particle-counting issue, Schroeder Industries offered to process fluid samples using a third-party LBM particle counter and the TFH portable fluid-contamination monitoring solution to determine if there was evidence of the phenomenon. Because of the tell-tale symptoms of particle-counting inaccuracies due to phantom particle counting, the results of the tests shown in table 2 are not surprising; the test results are consistent with typical cleanliness discrepancies produced by phantom particles.