Underground Mine Loaders Use Teleremote Controls 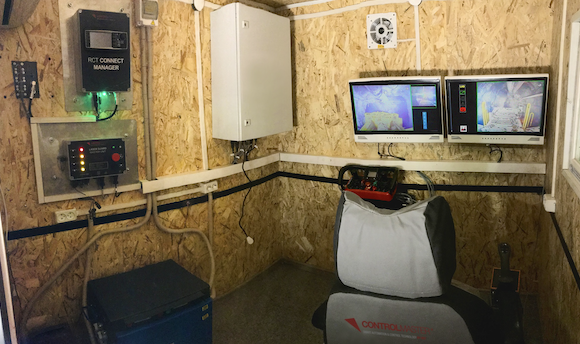 Australian company Remote Control Technologies has installed a system that allows for remote control of underground loaders in a mine in Kazakhstan.

RCT’s ControlMaster Teleremote solution can be tailored to a mine’s site-specific requirements. RCT worked with local a Caterpillar dealer to install the technology onto two Cat R1700G underground loaders and associated automation centers located in the Tishinsky underground copper mine in northeastern Kazakhstan.

RCT plans to manufacture the Teleremote technology for an additional twelve Cat R1700G and Cat R1300G underground loaders to be installed at the Tishinsky and Dolinnoye mines.

With the help of strategically placed cameras and sensors, Teleremote enables machine operators to control the loaders from a secure automation center that can be located either in the mine or above ground. Operators can access the machine’s full range of functions as if they were sitting in the machine’s cab.

RCT also supplied its digital communications network RCT Connect and integrated it with the underground loaders. RCT Connect is designed for autonomous and Teleremote machine operations in underground mining environments and can provide consistent low-latency communications between command inputs from the automation center and the loaders.

“Our Teleremote solution means the operators will control the loaders from inside the automation center, and they will be protected from the hazardous conditions often found at the mine face including geotechnical risks, dust, exhaust fumes and temperatures as low as -27⁰C (-16.6⁰F),” said Stephen Macarow, RCT’s Moscow-based business development manager.