The construction industry is a gruelling environment for machinery. The heavy lifting, sparks, friction, and dust and debris means that all equipment has to be extremely hard wearing. Rented machinery tends to be put under further pressure, and clients want to make the most of their loaned equipment so it can regularly be worked on double or triple shifts. This machinery is also often worked right to the limit of its capacity and, in some cases, is over-stretched.

A national plant hire company contacted Apex Hydraulics after experiencing an issue with its fleet of JCB 535-140 and JCB 540-170 telescopic handlers (telehandlers).

Telehandlers are vehicles with a variety of uses across the construction industry. They enjoy the benefits of both a crane and a forklift truck. The vehicle can move around like a forklift, but rather than pallet arms that have limited movement, the long boom on a telehandler can be extended a great length from the body of the vehicle. The boom can be fitted with a number of different tool attachments, making it capable of lifting, moving, and carrying goods.

The company was finding that the hydraulic mast cylinders of the telehandlers were all breaking down after about 1,000 hours of use—far too quickly to be considered an acceptable time for breakdown through normal machinery wear and tear. Therefore, replacing like-for-like would not be an efficient option.

Unfortunately, the Original Equipment Manufacturer (OEM) had produced a standard cylinder that – while fit for purpose, was not capable of remaining intact under the extreme conditions required of it. The likelihood was that the vehicle was lifting and carrying loads when the boom was fully extended, putting excessive pressure on the neck gland of the cylinders. The cylinders needed to be repaired—but with a solution that could survive the strains of a busy construction site.

The client approached our company to commission a design that would be more durable even under these extreme conditions.

The design team produced a new concept that would be far stronger and able to survive more extreme loads. Restricted by size limitations demanding that the finished cylinder fit into the same space as the original, the designers could not increase the size of the cylinder components. Instead the rod was made from a stronger steel, with increased resistance to bend, so that an occasional load that was in excess of its loading weight would not result in a permanently bowed cylinder rod.

The steel was induction hardened with chrome plating so that pitting and galling would be reduced and nothing would scrape against the seal. The neck gland and piston were redesigned so that pressure or sideload from a temporary bend in the cylinder rod would not damage the rod coating and seals. The design was drawn up and shown to the clients to approve.

The parts were expertly manufactured by the engineers in the machine shop. Special seals were ordered in by the fitting department and the redesigned parts were fitted into the original cylinder.

The parts were tested and inspected for safety and quality in-house by a dedicated inspection team. The real test, however, is out on the field as close observations are made of the longevity of the telehandlers with their newly repaired hydraulic cylinders. 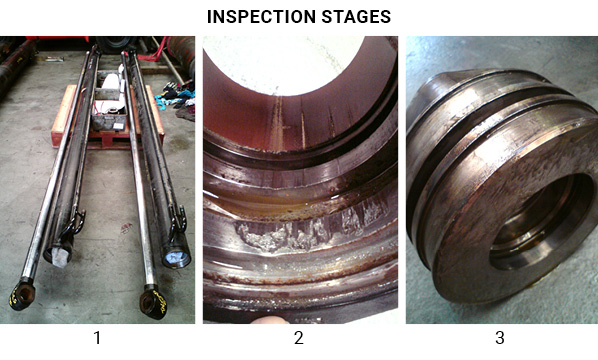 The initial vehicles have already worked for over 2,000 hours and are still functioning well with no recorded machinery failures. This means that the lifespan of the telehandlers has already been increased by 100%. Thirty machines are already in service with the Apex-built repairs.  With no known vehicle breakdowns due to hydraulic failure on these machines as yet, time will reveal the eventual lifespan increase. What is certain is that this repair has saved the company significant costs in replacement parts and down time.