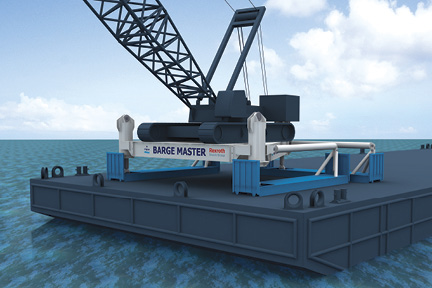 Barge Master BV, a Dutch company, launched the BM – 001, its first operational motion compensation platform to provide stability and safety to offshore crane operations. The moving platform utilizes a drive and control system from Bosch Rexroth to neutralize the roll, pitch, and heave caused by waves and considerably expands the uses for standard floating cranes.

Crane stability has historically been a major challenge for offshore installation and decommissioning work because even small waves on the sea produce major movements for the tip of the crane, endangering the crew.

Working together with Rexroth, Barge Master developed a comprehensive solution, including all the necessary drive and control components to compensate for movements in three degrees of freedom. 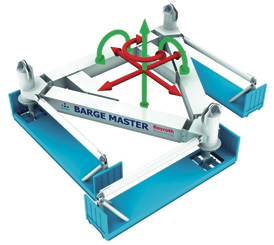 Special sensors deliver motion data to the system, calculating how the platform must move to compensate for the action of the waves. Three degrees of freedom (heave, roll, and pitch) are compensated by three hydraulic cylinders that attach the crane to the hull of the ship. By measuring the motions of the vessel and controlling the motion of the actuators, the cylinders’ movements can compensate for the waves.

The remaining degrees of freedom (surge, sway, and yaw) are compensated by dynamic positioning of the vessel or traditional mooring systems.

The launch of the Barge Master platform allows for cranes weighing approximately 400 tons to operate in swells up to five times greater than allowed by current systems. “With Rexroth motion compensation, we have expanded the application window for the floating cranes—handling waves of up to 150 centimeters,” van den Bos noted.

The Barge Master system is suitable for all kinds of standard marine vessels, significantly expanding the utility of standard cranes, and drastically reducing the manufacturing costs and operating expenses for offshore projects.