Robots featured prominently at the spring summit of the Center for Compact and Efficient Fluid Power on April 13 and 14.

Two presentations described research into robot applications and the implications for fluid power.

In the summit’s final presentation, Kent Cavender-Bares, CEO and cofounder of Rowbot Inc., described a robotic agricultural vehicle the company developed that may one day replace huge machines that plant and tend to farm crops.

“Bigger is better has been the mantra in the ag sector, and it’s because we’ve wanted to maximize the output per operator,” Bares told the summit via Zoom. “It’s getting harder and harder to find operators. So the machines are getting larger and larger, traveling faster, covering more ground. But there are unintended consequences.”

When it comes to planting or spreading fertilizer or other nutrients for the soil, farmers normally use big, high-horsepower machines that carry a lot of product and cover lots of ground rapidly. But there are downsides.

“Machines get locked out of fields,” Bares said. “They create ruts and farmers don’t want ruts. So after a big rain, big machines have to wait.”

As the season wears on and the crops grow, farmers move to high-clearance sprayers. But eventually, the crops are too high even for the sprayer. The height of the crop locks a large machine off the field.

“The concept was, let’s go between the rows,” he said.

And that solution has to be robotic. “You can’t put a person on it.”

So Bares and his team, completely focused on row crops, developed a prototype small robot that carries a 13-horsepower diesel hydraulic system, a central hydrostatic transmission, and runs on tracks. Using lidar sensors, the machine runs between rows of corn, with a few inches of clearance on either side. Its mobility on wet soil is better than a large machine, though it has its limits. 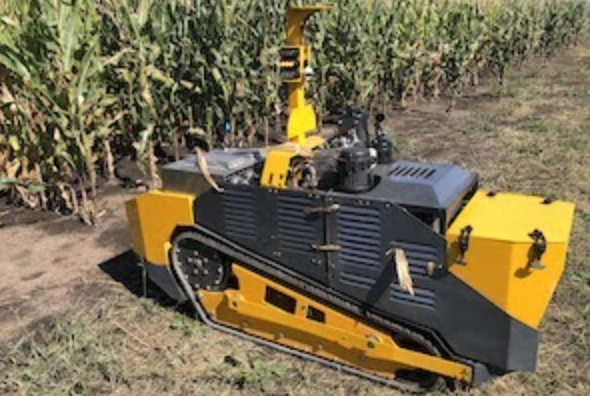 Bares began demonstrating the robot to groups of farmers and others and was generally gratified by the response to the prototype.

“We quickly learned that people don’t want to babysit robots. But they were generally intrigued and wanted to know more.”

The team demonstrated how the robot navigates between rows using lidar sensors.

“We noticed early on that crowds of people line up to see what robots in agriculture are going to be all about.”

Noting that it’s a relatively tiny machine compared to the larger machines they’re used to, many farmers asked, “How are you going to get any work done?”

Bares said he envisions farmers using five to ten of the robots that would be monitored and activated by a remote op center that communicates with the machines and responds to issues that come up on the field.

“There really needs to be a fleet of small machines, then there are all kinds of advantages.”

Five to ten machines can cover what one large machine covers, he said, and they can operate day and night. He added that ownership and operation of a fleet of robots will be more economical than one large machine.

As for continuing development, his team is working on payload delivery, mobility, and navigation.

The ag robot Bares and his team built is the type of equipment one typically thinks of when it comes to robots. But the development of soft robotics can have applications for more precise work – like surgery.

Eric J. Barth, associate professor of mechanical engineering at Vanderbilt University, is working on another question related to fluid power in soft robots: Can they be hydraulically driven?

Most soft robots, which are constructed from more pliant materials that often imitate the ways living organisms move and adapt to their context, operate via pneumatics or cable. Barth and his team are experimenting with a centralized hydraulic system using bidirectional pumps and a gerotor.

“It would be great to be able to be hydraulic,” Barth said during his presentation. “This is a concept that is a little bit new for the people doing soft robotics.”

Barth’s team developed a microhydraulic power unit servo pump that is compact, efficient, quiet, simple, and 3D printable. The pump is linked to a soft actuator that, when pressurized, curls into a semicircular shape that can be used, for example, as a finger. The device provides fast precision control, and the pump changes speed very quickly, Barth said.

“What we’re trying to pursue is a high power density and very controllable unit that can be hydraulic. We would also like to move the actuators from being pneumatic to being more hydraulic,” Barth said.

“With fluid power, the magic happens with high power density. When you increase the pressure, that decreases the amount of fluid that you have to pump. Higher pressure means higher power density,” he said.

Barth said there is no control valve in the system.

“It’s direct pump control, which is very efficient and small.”

Barth’s team envisions two possible applications for their device. One he called multimodal locomotion for use in demanding environments in which a robot may need to swim, climb, or crawl. The team is modeling the robot on an aquatic creature, the Pacific lamprey, which can crawl up waterfalls.

A second possible application is a miniaturized platform for noninvasive surgery, which would use a very small soft robot. In this device, the pump needs to allow very accurate position control via accurate flow control. An application for this type of robot might be knee-replacement surgery. It would require a soft robotic actuator that, in a minimally invasive way, can accurately fit prosthetic pieces into the patient’s knee joint.

One of the team’s goals is to make robots “that are good at interacting with people,” Barth said.

Other presentations about components included reports on a variable propulsion motor, polymer-enhanced fluid effects on hydraulic pumps, the interfacial mechanisms of ionic liquid lubricants, and machine learning in regression-based pump and motor models.