A community technical school received funding for a hydraulics program. They had nice hands-on-training stands in storage and did a nice job setting up their hydraulics lab. They talked a Physics instructor into teaching the class, and things were going fine until he had the students plumb up the circuit shown. The cylinder would stutter badly when it was extending and run smoothly when it contacted a load spring.

The professor thought it was just a case of air in the cylinder, but the students could not see any air spitting out when they bled both ends of the cylinder. They were thinking the cylinder was damaged inside and should be replaced. The professor moved the students over to a spare hands-on trainer and found it also stuttered using the same circuit.

The circuit used a pressure-compensated pump set to 3 gpm; a pilot-operated, closed-center directional valve with internal pilot; and external drains and a cylinder. The cylinder would extend 6″ before it contacted a die spring, which would simulate a load, causing the pressure to build up as the spring compressed. The flow meter indicator bounced up and down when the cylinder stuttered, but held steady when the load spring was engaged. The glycerin-filled pressure gage dropped to a low reading until the load spring was compressed. 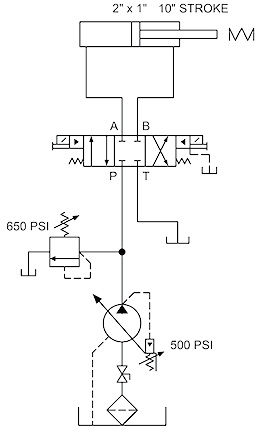 Could he have two defective cylinders?

The stuttering cylinder without a load only needed very low pressure to extend. Even though the pilot-operated directional valve had a closed center, it still needed at least 75 psi to keep it shifted. The cylinder would start to extend at a pressure lower than 75 psi, causing the directional valve to un-shift, momentarily stopping the cylinder. As the valve un-shifted, it blocked the flow, causing the pressure to build higher than 75 psi, shifting the valve open again. This pressure fluctuation was too quick for the gage to register, but it showed up in the cylinder and flow meter. Putting a little backpressure in the tank line or increasing the pump flow solved the problem.
By Robert Sheaf, CFPAI/AJPP, CFPE, CFPS, CFPECS, CFPMT, CFPMIP, CFPMMH, CFPMIH, CFPMM, CFC Industrial Training

4 thoughts on “Cylinder Stuttering on a Technical School Trainer”