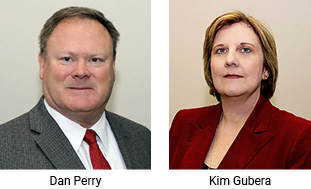 PIRTEK announced executive promotions on its leadership team as the company launches into new markets and continues its growth of new franchises. Dan Perry has been promoted to president in addition to his current role as chief operating officer (COO). The company has promoted Kim Gubera to vice president and chief financial officer (CFO).

PIRTEK hired Perry, a native of Rhode Island, in November 2015 as the vice president and CFO. In 2016, he also took on the role of chief operating officer (COO) and is now president and COO. Perry focuses his energies on overseeing franchise development, administration, warehousing, IT, training and other areas.

Perry has worked as a CFO/COO for mid cap companies in a number of different geographic locales during his career, including California and Panama. He earned his CPA while working at the accounting firm KPMG.

Before her promotion to CFO, Gubera worked for PIRTEK as its corporate controller. An experienced corporate financial professional, she previously served with a landscaping franchise system where she was director of finance.

In 2017 PIRTEK opened 12 new locations across the United States. The company’s Tier 2 program, implemented in 2016, allows entrepreneurs to start PIRTEK locations at a lower cost and quicker time to market. The franchisee who opts for Tier 2 can keep PIRTEK inventory in a warehouse or storage facility and lease two Mobile Service Vehicles. Tier 2 also provides a path to Tier 1 ownership for franchisees.

PIRTEK specializes in fluid transfer solutions through its 73 locations throughout the country. PIRTEK has more than 400 franchise locations in 23 countries around the world.