The temperature at which the fluid is to be working must be considered. At elevated temperatures, high water based fluids may lose water as it evaporates and will need to be continually monitored and replenished. The same fluid may become useless at cold temperatures because of high viscosity or freezing. A fluid must be chosen that has a viscosity range and proper lubricity for the environment in which it will be working. 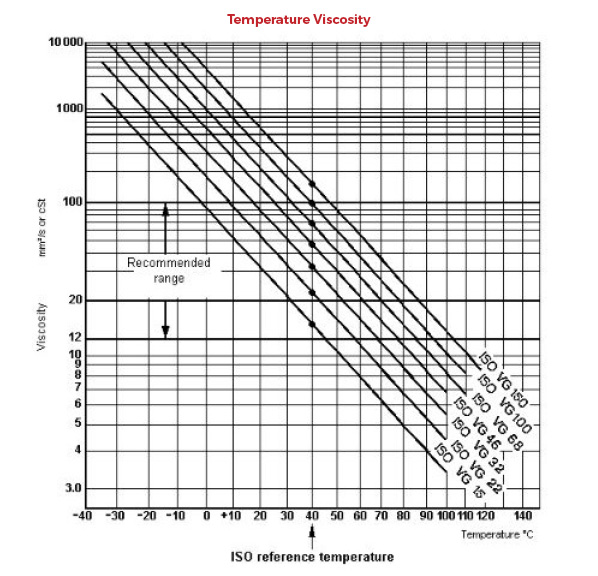 Temperature is often the controlling parameter (when choosing a fluid). No single fluid meets all the performance requirements in even a single range of temperatures. The truth is that the designer must sacrifice some “important” characteristics to achieve “essential” characteristics.

Viscosities are low at the higher temperatures, and oxidation will deteriorate the oil in open systems. However, both closed systems and proper bearing and seal design help solve both problems.

Note: In a straight petroleum product for every 18°F rise above 140°F, the life of the fluid is cut in half.

To adequately carry out the previously stated purposes, the fluids used in hydraulic systems must possess, to varying degrees, specific desirable characteristics. Not all fluids will have all of the necessary attributes in equal strength. Consequently, when selecting fluids it is sometimes necessary to compromise some properties in favor of others that may be more important for a specific application requirement. In general these properties include: viscosity and viscosity index, pour point, lubricating ability, oxidation resistance, compatibility with system elements, rust and corrosion protection, and demulsibility.

Viscosity affects the fluid’s ability to be pumped, transmitted through the system, carry a load, and maintain separation (lubrication) between moving surfaces. The selection of proper viscosity is often a compromise in order to optimize system performance. Too high, or too low a viscosity for a given system, could present problems of performance, leakage, energy usage, and so forth.

Viscosity too high (fluid is too thick):

Viscosity too low (fluid is too thin):

There are numerous methods for defining viscosity. Among these are: absolute or dynamic viscosity (centipoise/cP), kinematic viscosity (centistoke/CST) and relative viscosity as measured in Saybolt Universal Seconds (SUS or SSU). Most hydraulic systems run with oil in the range of 150 to 300 SUS with typical ISO viscosity grade (ISO-VG) range of ISO-VG-22 to -68. 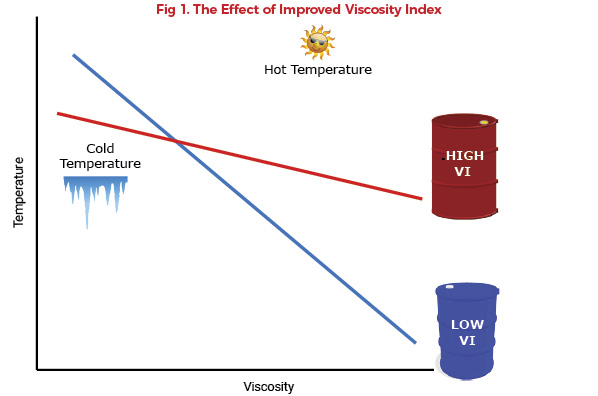 Multiple viscosity oils typically include additives (polymers) to improve the viscosity index. These oils can exhibit both temporary and permanent decreases of viscosity due to oil shear during hydraulic machine operation. Consequently, multiple viscosity fluids with high shear stability are desirable. The viscosity of hydraulic fluids, particularly petroleum-based fluids and vegetable oils, is directly and sometimes adversely affected by changes in temperature. For this reason, it is essential that the startup and operating temperatures of mobile machinery be monitored. To insure proper lubrication, machinery should not be put into high speed or heavily loaded operation until the system fluid is warmed up to the operating temperature.

Arctic conditions will cause an increase in viscosity that could result in pump cavitation and severe damage to the hydraulic system at startup. Many hydraulic components for mobile applications are designed with cold starting conditions taken into consideration and offer some protection against cavitation until the fluid is warmed to operating temperatures. Unless otherwise indicated by the manufacturer, mobile machinery is typically run at idle until satisfactory operating temperature is attained.

Excessive heat in a system can cause a reduction in viscosity. This will result in severe wear due to a loss of lubricity as well as the destruction of the fluid through oxidation. Severe oxidation, in turn, may cause the fluid to thicken by causing varnish, sludge, corrosive acids, and the destruction of additives. The Society of Automotive Engineers (SAE) has established numbers to specify ranges of viscosity for engine oils at specified test temperatures, illustrated in Fig. 2. Winter numbers (0W, 5W, 10W, 15W, etc.) are specified viscosity ranges at cold temperatures. Summer oil viscosity numbers (20, 30, 40, etc.) are measured at 212°F. 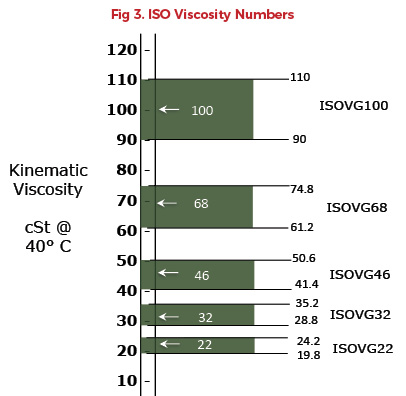 International Standards Organization (ISO) viscosity grades are shown in Fig. 3. The ISO viscosity grade number represents a range of kinematic viscosity values at 40°C (104°F), and is the midpoint number of the range. The ISO designation is becoming more popular, and many fluid suppliers are incorporating the designation in their brand description.

A useful tool, particularly with mobile equipment exposed to radical changes in temperature, is to obtain occasional verifications of a fluid’s adherence to its specified viscosity. Of course, this specified viscosity should be defined within the operating parameters of the application. When viscosity analysis is used as a fluid monitoring tool, realize that the actual viscosities of new fluids can vary somewhat from their specifications. Consequently, changes in viscosity over a period of time are usually considered more important than an actual reading. Changes of more than 10% from the original reading are considered an indication of problems.

1. Viscosity is defined as:

a. Having consistent thickness throughout a temperature range.

b. Resistance to flow at a given temperature.

c. The stiction of the fluid.

d. The pour point of the fluid.

e. The evaporation point of the fluid.

2. What is the reason for knowing the chemical compatibility?

b. Higher temperatures in the fluid.

e. None of the above.