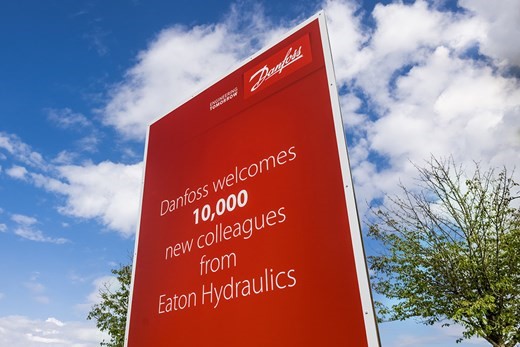 Danfoss has put Eaton’s hydraulics know-how to work, searching for hybrid solutions in markets that are demanding greater efficiency and productivity from machines that can still do the necessary work.

Danfoss is practicing “conventional hydraulics, just done much better and more efficiently than in the past,” Alström said.

The Eaton acquisition provided Danfoss entrée into industrial and off-highway markets that it didn’t have previously. Alström said it’s a growth area for Danfoss.

“I think the investments were lacking in the past in the industrial product portfolio of Eaton Hydraulics,” Alström said. “We are now going full throttle with investments in industrial.”

“We know that for many players in the industry, this is quite an attractive market segment. And we are thrilled to be able to compete in that area. It’s going better than expected, to be honest.

We’re also investing more than we originally planned because we see the market opportunity,” he said.

The Eaton merger expanded Danfoss’s reach into industrial and off-highway markets while also growing its global footprint. Danfoss gained manufacturing locations in places “we were just dreaming about,” he said, like Japan, South Korea, and India.

Danfoss continues to respond to changes in the industry and the business that present opportunities to put its technology to work.

“We pride ourselves in market sectors that are very much aligned with the megatrends in the world,” he said. “There are so many areas where Danfoss technologies today are relevant to the markets and the megatrends that are happening.”

Like all companies everywhere, Danfoss is challenged by economic and logistical disturbances that make business difficult. Supply chain bottlenecks, for example, are “an area of great concern to us.”

“Being dependent on container freight is not a good situation,” Alström said. “We are really working hard to localize and regionalize our supply chain, so that we no longer ship over long distances.”

“That’s really a significant trend change,” he said. The former way of doing things with global sourcing, “those days are gone,” Alström said. “Even if the local cost might be more expensive, we save a lot in the whole supply chain piece, and we’ve reduced working capital.

“We used to pay 17 hundred bucks for a 30-foot container, and today we have to pay sometimes ten times that,” he said. “That just doesn’t work anymore.”

Besides the supply chain, the are other sources of uncertainty, such as inflation. Also, like most other companies, Danfoss has had trouble filling jobs. And the war in Ukraine also feeds into general economic instability.

But Alström is not worried, he said.

“This is all about supply and demand. We’ve seen this in the past. We’ve had these cycles before. Now it’s extreme because there are so many factors impacting this at the same time.”

But one thing that won’t change is that hydraulics is with us for the foreseeable future, despite predictions and proclamations elsewhere throughout the industry, including the off-highway markets, he said.

“Even if you remove the diesel engine,” Alström said, “and have an energy source in the form of a battery pack, you still need hydraulic solutions in such a machine, because there’s just no way to power the work function with electric means today.”

“Power and energy density still speak in favor of hydraulic solutions,” he said.

Of course, that growth has benefitted Danfoss and remains the reason it acquired Eaton last year.

“We have very strong year-over-year growth. Right now, we’re very pleased that we’re out-pacing the market, but the market itself has very strong growth.”

“There’s a lot of new technology coming,” he predicted.

One new product that’s coming is Danfoss’s Digital Displacement technology, creating a generation of hydraulic pumps controlled by digital means and delivering better efficiency and productivity. It’s not on the market yet but is undergoing “real machine testing,” Alström said.

As an appetite for environmentally friendly solutions has grown, he said, so Danfoss is optimizing “conventional hydraulics, just done much better and more efficiently than in the past.”