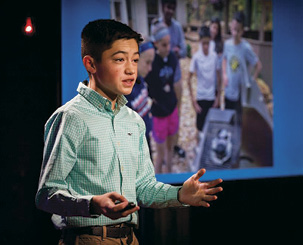 When Ashton Cofer, 14, stood on the TED stage at TED-Ed Weekend in December 2016 and delivered a TED Talk to a live audience, with cameras rolling, the accomplished innovator shared a lesson he learned from nearly a decade of watching and performing in FIRST LEGO League: “You can’t have success without failure.”

Ashton’s inspiring TED video was released in late March and featured on the TED.com homepage. It has received more than 700,000 views.

Ashton began following FIRST LEGO League at age 5, when his older sister joined a team. He saw how much fun she was having and couldn’t wait until he was old enough to join. Four years later, Ashton joined FIRST LEGO League Team 23—“The Incredibots”—a neighborhood-based team in Gahanna, Ohio. Ashton and his team went on to develop a string of innovative solutions, including the patent-pending Styro-Filter, which converts Styrofoam waste in activated carbon that can be used to purify water.

When Ashton was nominated to give a TED Talk about the inventing the Styro-Filter, his time in FIRST had prepared him. “In FIRST LEGO League, you do a lot of public speaking – speaking to judges, memorizing presentations,” Ashton said. “I’ve had a lot of preparation over the years, which helped me present my TED Talk.”

“I talked about overcoming failure. I was really happy to be able to share my story,” he said.

FIRST (For Inspiration and Recognition of Science and Technology) was founded in 1989 to inspire young people’s interest and participation in science and technology. Based in Manchester, N.H., the 501(c)(3) not-for-profit public charity designs accessible, innovative programs that motivate young people to pursue education and career opportunities in science, technology, engineering, and math while building self-confidence, knowledge, and life skills. Visit www.firstinspires.org.