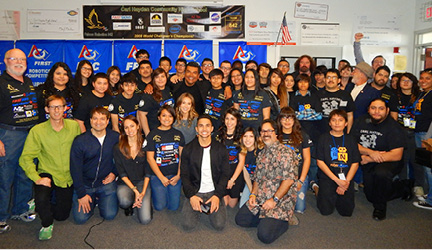 The stars are aligning for science and engineering as a new movie starring Jamie Lee Curtis, George Lopez, Carlos PenaVega, and Marisa Tomei about a high-school robotics team made its debut in theaters in January. The movie, “Spare Parts,” is based on FIRST® Robotics Competition Team 842 – Falcon Robotics from Carl Hayden Community High School in Phoenix, Ariz. and their famous robotic underdog victory against MIT, which was chronicled in the WIRED article “La Vida Robot” in 2005.

Team members discovered a leak shorting the system in their robot, Stinky, during the competition. With limited time and resources, students stuffed the leak with tampons, impressed the judges with their creative problem-solving skills, and emerged victorious from the underwater robotics contest, besting MIT among other college teams.

Lajvardi credits the team’s innovative, creative thinking and victory to their participation in FIRST, which dates back to their “rookie” year in 2002. 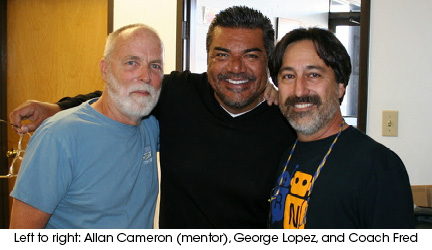 “FIRST offers students the rigors and rewards of engineering during the six-week FIRST Robotics Competition build process, which taught my students creative problem-solving skills, collaborative teamwork, and innovative thinking skills that gave us more of an advantage in competitions,” said Lajvardi. “Students also built their self confidence through the FIRST experience, yet they learned how to ask for help from mentors when they needed support.”

In the movie, George Lopez’s character is a combination of Cameron and Lajvardi. All of the remotely operated vehicles (ROVs) were built and at times even operated during onscreen action by students and alumni of three FIRST teams: Team 842, Team 39, and Team 1726.

According to Lajvardi, the cast and crew of “Spare Parts” were amazed that the high school students were capable of designing, building, and operating all of the ROVs for the movie; the teams built a total of 24 ROVs. In addition to building and operating the ROVs, the FIRST teams also helped design the tasks the ROVs had to perform onscreen.

“‘Spare Parts’ tells an impressive story of grit, determination, creativity, and leadership in engineering,” said FIRST President Donald E. Bossi. “The characters—who are modeled after talented, real-life leaders—show the world you can work hard and have fun in science and engineering while accomplishing your goals through teamwork and individual success.”