When the workforce team traveled to Houston for the FIRST® Robotics Competition, we encountered many teams with creative branding and marketing ideas. One that stood out was the unique spin on “Flat Stanley,” a children’s book character who later turned into a fun pen-pal activity for children, involving sending “flat” characters through the mail and writing about the character’s adventures. 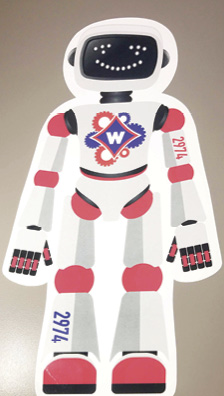 This fresh spin came from the team from Walton High School in Georgia in the form of a mascot named “Flat Walt.” The mascot was created to encourage people to learn about science, technology, engineering, and math (STEM). Flat Walt has already traveled the world and even into space. After chatting with the Walton Robotics Team about their use of pneumatic components in their robot, I got to become part of Flat Walt’s journey. After spending some time at the NFPA offices in Milwaukee, Flat Walt accompanied Denise Rockhill, who is our international standards development manager, and Katrina Schwarz, who is our association marketing manager, to San Antonio, Tex., for the ISO/ TC131 standards development meetings.

The story of Walt’s involvement has been sent to the Walton Robotics Team, recapping the experience and what it could be like should students decide to pursue standards development in the future.