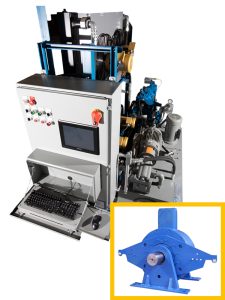 Force Control can furnish a complete test stand, including frame fabrication, controls, data acquisition, and support. This can be a benefit to many companies that often build in-house testing facilities but lack time to design and support the complete system. Force Control also works with test engineers who are makers of their own design and prefer to handle certain aspects or components of a system in-house.

A variety of sizes and arrangements are offered for thru-shaft mounting, flange mounting, and shaft coupled foot mounting, as well as vertical, horizontal, or incline mounting orientations. Load brakes can be supplied with a torque arm and load cell; cooling, filtration, and actuation systems; and data acquisition software, as well as control valves, structures, and other ancillary components.

Oil shear technology provides a film of transmission fluid between alternating friction discs and drive plates of a mechanical, multidisc friction brake. As the discs and plates are brought together, squeezing the fluid film, it initiates hydroviscous shear. This phenomenon transmits torque through the fluid through laminar flow.

This phenomenon is based on the laminar flow of the fluid film between the friction discs and drive plates. The fluid tends to flow in layers, with each layer moving at consistently different speeds between the rotating friction disc and the static drive plate. As the pressure squeezing the disc and plate together increases, the hydroviscous force of the molecules sliding past each other increases, providing torque. In other words, torque output is directly proportional to the pressure applied to the friction stack.

With the fluid layer between the friction disc and drive plate, there is no tendency to stick slip or chatter at very low differential speed, providing a smooth transfer of torque down to zero rpm.
The second part of the equation is heat energy, which must be dissipated from the system. Using oil shear technology, the fluid circulates through the friction stack and cycles out of the brake, to a forced lube cooling and filtration system. The cooled fluid lubricates the brake components, including the friction material, eliminating the typical degradation found in dry friction brakes. This also allows for a more compact load brake that can, in many cases, be directly mounted to the output of a test device.