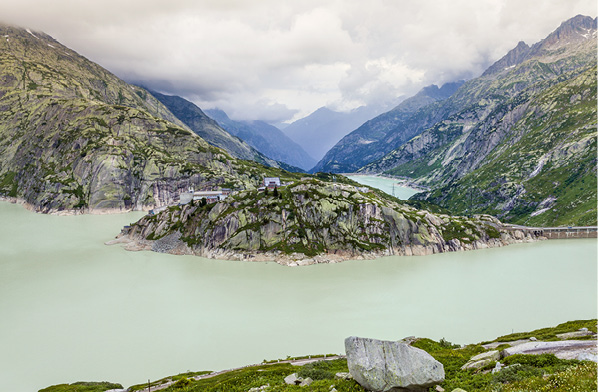 The Kraftwerke Oberhasli AG (KWO) power plant can generate energy on demand using water dammed in Switzerland’s Lake Grimsel, 6,263 feet (1,909 meters) above sea level. From its hydroelectric power plants in the Grimsel area, the Swiss energy company generates electricity and stabilizes the grid in Switzerland and elsewhere in Europe. In addition, reservoirs act as natural batteries that store energy in the form of water used later to generate electricity.

But the use of natural runoff from glaciers and rainwater poses a problem: suspended matter. The glaciers continuously erode fine stone particles from the mountains. The runoff transports these solids into the reservoir, where they collect with other suspended matter brought in by rainfall. These 25-to-200-micron particles pose a problem for the huge turbines in the KWO power plants, as they cause heavy wear of the slide valves. The valves use the pressure of the water to control the ball valves that, in turn, control the intake to the turbines. Due to the water’s drop height of 2,200 feet (670 meters), high pressures occur in the valves and their supply lines.

Upstream, sand-settling tanks prevent the entry of coarse particles into the control valves, but they have demonstrated only limited success. “Until now, the valves had to be cleaned and repaired by KWO every three to four months,” said Franz Christen, sales and technical manager at BT-Hydraulik AG, which KWO commissioned to find a solution to the problem. In the past, the valves had to be completely replaced on a regular basis, but they are no longer available on the market. To reduce or eliminate costly and time-consuming repairs, the plant operator wanted a new solution.

“The installation of larger settling tanks was not an option,” Christen said. “At water pressures of 870, 1,160, or even more than 1,450 psi, very large and complex tanks would be needed. But that would not be feasible for economic and environmental reasons, and for lack of space. Converting to oil hydraulics was likewise not feasible for the same reasons.”

So KWO decided to install filter systems directly upstream of the control valves and turned to the Berne-based BT-Hydraulik, a leading company in the field of hydraulic drive technology.

The experts from BT-Hydraulik advised KWO to use an automatic basket strainer. “Conventional filters clog up over time and need to be serviced and replaced at regular intervals,” Christen said. “An automatically self-cleaning filter is the more economical solution.”

The problem was that standard backwash filters are not designed for the high pressures in a hydroelectric power plant. BT-Hydraulik and Eaton continued to work on refining the Eaton Model 2596 strainer. This motor-driven strainer provides continuous removal of solids from fluids in pipework systems, though only within a standard pressure range up to 232 psi. However, Eaton provides customization of the filter system to serve customer-specific applications. 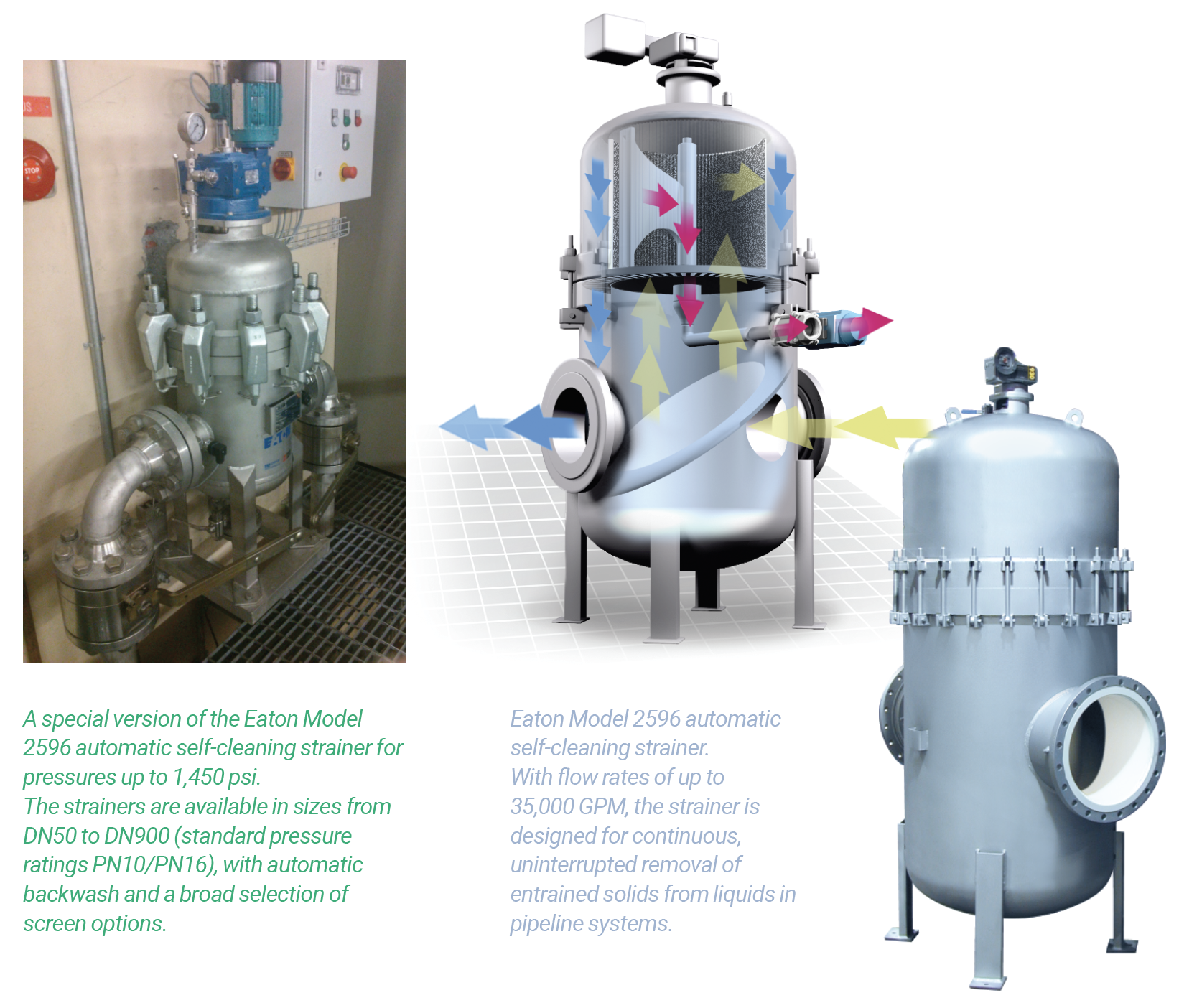 A version of the Eaton 2596 automatic basket strainer, designed for pressures up to 1,160 psi, was developed for KWO. A variety of measures were required to make it possible. First, to withstand the high pressures, Eaton modified the entire housing by increasing the wall thickness and making the cover considerably sturdier. In addition, the flushing arm drive shaft was sealed with a quadruple mechanical seal.

“A particularly challenging problem was to find a filter element that offers the highest possible filter fineness that could also withstand the high pressures and was backwashable,” Christen said. A reinforced version of the DuraWedge filter elements proved the solution. Made of V-shaped stainless steel wire profiles, the standard version is capable in demanding applications. After further reinforcement, they now can withstand the high pressures in the hydroelectric power plant, filtering out a large part of the suspended matter due to a filter fineness of 25 µm.

“However, the system had to be additionally adjusted so that the screen baskets would not be deformed in the backwash phase,” Christen said. “A pressure reduction of 870 psi to the ambient pressure would have been problematic despite the reinforcement.”

The high-pressure basket strainers used in KWO’s hydroelectric power plant – so far there are four – have also been adapted to the operating parameters used there. The connector size for two of the filters is 2 inches and for the other two is 3 inches, with a flow rate of between 53 and 106 gallons per minute. However, the design of the high-pressure strainer basket can also be adapted to other parameters – in line with whatever the application requires. The backwash is triggered by an Eaton control – in KWO’s case, whenever the differential pressure reaches 11.6 psi. Alternatively, control using predetermined time intervals or permanent backwashing would also be feasible.

Even though the test phase of the new filter system at KWO is scheduled to run for several years, initial results are already clear. The company labeled the results “very good.” “So far we have had no outages and the system perfectly meets our needs in terms of maintaining and cleaning the baskets,” the company said. Especially compared to the turbine lines where the sliding gate valves have not yet been retrofitted, it is clear that wear and tear has been significantly reduced. The high-pressure automatic basket strainer minimized required maintenance and associated costs.