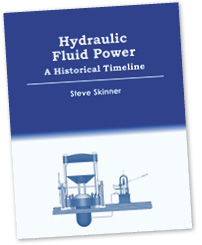 Steve Skinner has published Hydraulic Fluid Power – A Historical Timeline, a book that takes a light-hearted trip through the history of the power-transmission medium from its initial development at the end of the 18th century up until the modern day.

As a technology, hydraulic fluid power has been around for just over 200 years. Largely unnoticed, however, by the general public, it operates unseen and often unheard in the background of all our lives. Every time we travel by land, sea, or air, in some way or another we make use of its flexible and precise control. It helps build our roads, harvest our crops, organize our warehouses, and dispose of our rubbish. It’s involved in the production of our morning paper and our bedtime book, not to mention all of the glass, wood, concrete, metals, plastics, and textiles we come across in between. It provides us with thrills on our theme park rides and can even raise sunken ships from the sea. The story of its evolution is a fascinating one, not just from the point of view of the technology itself, but also its countless applications in just about every field of engineering. Many of these applications we think of as modern, but in fact the Victorians had excavators and the Edwardians had virtual reality rides all powered by hydraulics. Since its opening in 1894, London’s Tower Bridge has relied upon hydraulics to raise and lower its 1,200-ton bascules. Several cities in the UK and abroad also had extensive high-pressure hydraulic distribution networks with hundreds of miles of pipes supplying thousands of machines, and the last of these survived until 1976.

The 125-page book includes numerous full-color illustrations and can be ordered direct from www.lulu.com/shop. (Price: approx US$53.50.)

About the author: Steve Skinner’s 46 years of experience with hydraulics was gained mainly with Vickers and subsequently Eaton in the UK. Although having roles in applications, sales, and product management, for most of his time there Mr. Skinner was employed as European training manager. He is now a freelance lecturer but still actively involved in BFPA and CETOP fluid power certifications. Mr. Skinner can be reached at scskinner@sky.com or by calling +44(0)7813-664338. Visit www.steveskinnerpresentations.co.uk.