A Comparison of Position Sensor Technology for Hydraulic Cylinder Feedback 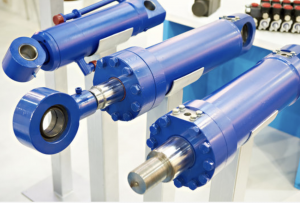 Position feedback sensors for hydraulic or pneumatic cylinders have used one of three traditional technologies: magnetostrictive, variable resistance, and variable inductance sensors. This article compares the three technologies, though other sensor technologies have occasionally been used successfully in this application. As the demand for increased control and functionality has increased over the years, sensor-instrumented cylinders are becoming more important in the heavy-industry, subsea, and mobile-equipment worlds.  Ultimately, a user or systems integrator must determine the requirements of the application and which technology best satisfies it on a total installed cost-versus-performance basis. We’ll examine the strengths and weaknesses of magnetostrictive, variable resistance, and variable inductance sensors.

Initially, a point to be noted is that all of these common sensing technologies use a long probe that extends into a deep, small-diameter blind hole that has been gun-drilled into the internal end of the cylinder rod.

Magnetostrictive technology has been the preferred technology for high-accuracy applications. The sensor, often called an LDT or MLDT, incorporates a stainless steel tubular probe and a short toroidal permanent magnet assembly around it that is installed in a counterbore in the piston. The most common package is designed to thread the sensors’ electronics housing into an O-ring port in the back of a cylinder, with the long slender probe inserted into the rod’s bore. It uses the time-of-flight principle to determine the magnet’s position with high accuracy and moderate response time. The magnet reflects a torsional mechanical pulse that is transmitted along a special wire inside of the probe called a waveguide. Typically, each of the magnetostrictive sensor manufacturers has its own style of magnet, with unique mounting features like the number of holes, the hole pattern, and so forth.

Magnetostrictive sensors can consume a fair amount of power and are not the most mechanically rugged sensors. They offer electrical performance over mechanical robustness because they are subject to shock and vibration issues.  But while there are some potential drawbacks mechanically, the magnetostrictive sensor’s package design is tailor-made for port-mounted in-cylinder use.

Variable resistance potentiometer-type sensors, commonly called pots, are selected where purchase cost is a driver and high accuracy is not paramount. A resistance pot is usually embedded into the cylinder’s rear end plate, as opposed to the port mounting of magnetostrictive sensors. It uses an insulated round carrier that is attached to the internal end of the gun-drilled cylinder rod and supports an electrically conductive wiper that contacts the surface of a partially conductive plastic probe. As the wiper moves along this plastic element, its resistance changes in a linear fashion, making it fairly easy to determine the carrier’s position and, thus, the rod’s position.

Pots have been seen as a good position-measurement solution for cylinders because of their ruggedness, favorable stroke-to-length ratio, and their large analog DC voltage output, which is a big percentage of the input voltage.  The major drawback to resistance pots is wear-out, especially if the cylinder is actuated at a high frequency or, even more importantly, dithered over a short range to improve a system’s dynamic characteristics. Since a resistance pot is embedded into the cylinder, replacement of a worn-out pot can be very time consuming and expensive and could even result in the need for a completely new cylinder.

Variable inductance position sensors have been used in the cylinder industry, but they have not had the widespread recognition of magnetostrictive sensors or resistance potentiometers.  This noncontacting technology has many significant advantages over resistance potentiometers regarding product life and long-term reliability. The technology usually competes favorably with the performance of magnetostrictive sensors in terms of linearity, resolution, and frequency response but at a significantly lower cost. Equally important is the fact that variable inductance sensors can withstand much greater shocks and vibration, such as those commonly found in heavy industrial and mobile-equipment applications.

Linear variable inductance sensors cover the middle ground between the higher level of performance and external port-mounting flexibility associated with a magnetostrictive sensor and the ruggedness and price of an embedded resistance potentiometer. These sensors operate by measuring the resonant frequency of an oscillator circuit that uses an inductive probe with its inductance varied by the position of the gun-drilled rod over it. Typically offered in full-scale ranges of 4 inches (100 mm) to 36 inches (900 mm), both port-mounted and embedded packages are available with connector and cable terminations that match those found on most catalog magnetostrictive sensors. These sensors offer either an analog DC voltage or current output, with an SSI digital output available for OEM applications. The variable inductance sensor presents a noncontacting solution that does not require a ring magnet. In fact, if a variable inductance sensor were installed to replace an existing magnetostrictive sensor, the magnet can be left in place in the cylinder rod end without interfering with the sensor’s basic operation.

In the past few years, the requirements for instrumented cylinders for subsea applications have dramatically increased. Variable inductance sensors can be offered in a pressure-sealed version that allows a user to install the sensor/cylinder in a subsea environment in depths of 10,000 feet (3000 m) with 3,000 psig of internal hydraulic pressure.

Remote field calibration is a standard feature offered on many variable inductance sensors. This feature permits a user to scale the output of the sensor while it is being installed on the cylinder. With a simple push of a button to set the zero and the full-scale output points, the sensor gives the desired full-scale output over its newly set range, so it is no longer necessary to scale the unit in an operating control system.

In another fluid power application, though not commonly used inside hydraulic cylinders, LVDTs are often used in spool position feedback applications for two-stage hydraulic valves.  A short-range variable inductance sensor with its simple inductive probe inserted into a hole in the end of the main spool is often an easier installation than an LVDT that requires an isolation tube to seal off its core from the valve’s pilot pressure.

While there are still many fluid power applications where resistance potentiometers and magnetostrictive sensors are a good solution, these applications tend to fall to either side of a bell curve.  Recent electronic advancements and the flexibility of package designs make variable inductance sensors cost effective for mainstream in-cylinder applications that tend to be near the peak of that bell curve.