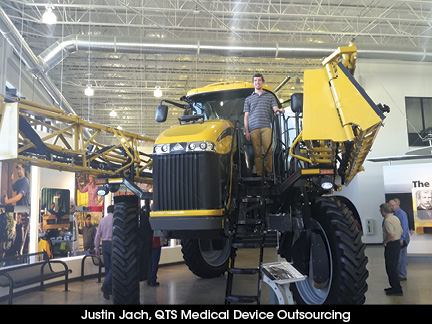 Scott Aldridge, a long-standing Chapter 5 member, organized a tour at ACGO, a manufacturer of agriculture machinery equipment, for Chapter 5’s September meeting. Approximately 40 members attended. Members toured the facility during the production of Challenger and Massy Ferguson tractors and sprayers. They witnessed testing, inspections, tracking, and quality assurance. Members remarked that the facility was clean, organized, and the employees seemed to function as a well-oiled machine.

It was obvious to the members that lean manufacturing is key at ACGO. Any employee has the power to stop the production line with the press of a button if something does not meet the specifications of the build. The line will stop, and a red light will flash. The team then gathers to discuss and address the issue with the employee who stopped the production line. According to ACGO, the earlier they catch an issue, the quicker and easier it is to repair. Multiple testing sites are located at strategic locations within the production line, and inspections are done at multiple stages rather than only at the end of the production line.

Members found the tour to be valuable, and many would recommend it to anyone visiting the Jackson, Minn., area.