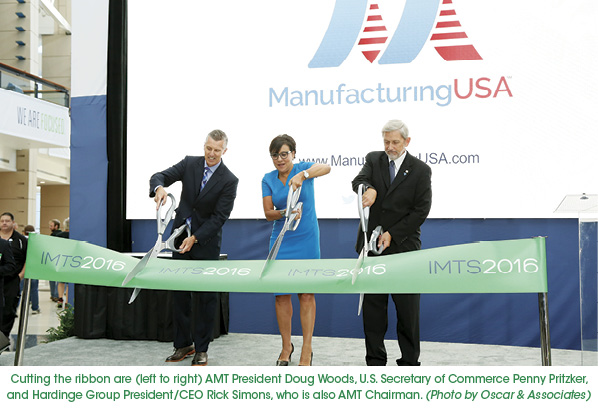 The International Manufacturing Technology Show (IMTS) ran from September 12-17 at Chicago’s McCormick Place. The 31st edition of the show was the third largest in number of registrations (115,612) and in net square feet of exhibit space (1,370,256). This show hosted the highest number of exhibiting companies ever (2,407). After move in, the building was 76 million pounds heavier.

The dominant technologies were additive manufacturing, robotics automation, and an increasing digital thread, according to AMT Vice President Tim Shinbara. On the automation side, embedded sensors and processors moved closer to the moment of inertia, enabling split-second decision-making that prevents collisions or enables a smooth, fluid, and rapid response. Numerous companies introduced equipment with Industrial Internet of Things (IIot) capabilities.

A highlight of futuristic technology at IMTS was the Emerging Technology Center (ETC). The ETC featured the AMIE (Additive Manufacturing Integrated Energy) project from the Department of Energy’s Oak Ridge National Laboratory. AMIE featured a 3D-printed house and 3D-printed utility vehicle. Both were made from carbon fiber-reinforced ABS plastic composite material at the DOE’s Manufacturing Demonstration Facility at ORNL using large-scale additive manufacturing. 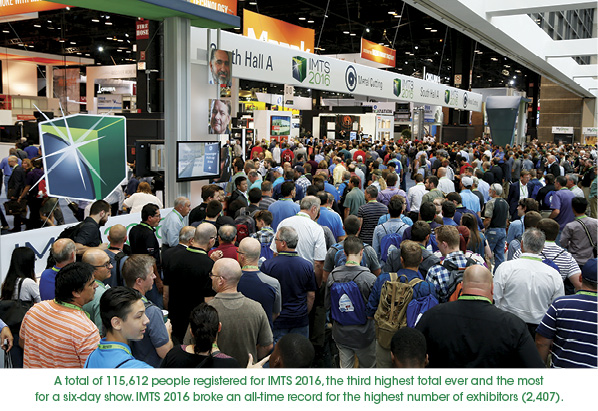 During the show, a record number of more than 17,000 students, parents, and educators visited the Smartforce Student Summit, which offered nine challenges, each designed for students to discover and use technologies used in advanced manufacturing, including CAD/CAM software, robotics, 3D printing, machining, tooling, metrology, automation, and welding. In the “Build It!” area, experienced teams of mechatronics students worked with waterjet experts from WARDjet to plan, wire, wrench, and assemble a high-end waterjet system.

Whether they spent one day or six at the show, visitors left IMTS inspired by new technology, satisfied that they found unexpected solutions to manufacturing challenges and fulfilled by connections they made with industry representatives.

“IMTS represents a who’s who of innovation. If you can dream about an application, IMTS 2016 showcased the products, processes, and technologies that will bring it to life,” said AMT’s Peter Eelman.