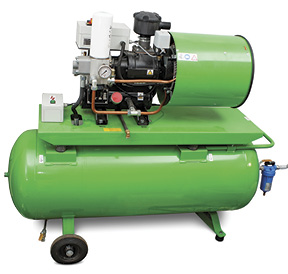 That pounding feeling in your brain may not be a migraine headache; it could be the piston-style reciprocating compressor pounding away in the corner of your shop. These units are often noisy, inefficient at full load compared to screw compressors, and produce hot, oily compressed air that is hard to dry and filter. Newer screw-type compressors, on the other hand, are quieter, can run at full loads for long periods of time, and produce cooler, cleaner air. But in a shop environment, caution must be exercised in replacing reciprocating compressors with screw-type units, or you may end up paying additional unexpected costs on your power bill.

The reason for this warning is the way most screw compressors operate under typical shop flow profiles. In a repair or service shop environment, the compressed air flow is usually very low, on average, with high intermittent peak flows when large compressed air-operated tools, such as impact wrenches, or other tools are used. It is not uncommon to see average flows in the range of 5 to 15% of the installed compressor capacity. This characteristic is not a problem for reciprocating compressors because they naturally operate in start/stop mode, which is a quite efficient mode of operation. For example, for average flows of 10%, a start/stop compressor will run 10% of the time, and be off 90% of the time. In this case, the average power consumption would be 10% of the full-load power of the compressor.

For example, a 15-hp reciprocating compressor may consume 12.5 kW while producing its full load of 55 cfm of compressed air. The average power consumed by this compressor when loaded at 10% capacity and running start/stop would be 1.25 kW. A similar-sized screw, on the other hand, may consume 12.5 kW fully loaded while producing 60 cfm of compressed air, making it more efficient at full load. But if its unloaded power is about 35% of full load, it would consume 4.4 kW during all its unloaded run time. If this compressor replaced the reciprocating compressor, it would be fully loaded about 9% of the time because it produces more air. The average kW consumed while in the loaded condition would be about 1.13 kW, which is less than the reciprocating compressor; however, if allowed to run unloaded the remaining 91% of the time, the average unloaded power consumption would add up to another 4.0 kW. Therefore, under these unloading conditions, the screw would consume a total of about 5.13 kW compared to the 1.25 kW of the reciprocating unit, or about four times as much.

Why do screws run load/unload instead of start/stop? It has to do with the number of motor starts allowed. Having a heavy screw element on the end of the motor shaft increases the starting current required by the compressor motor. Motors are typically allowed only a certain number of starts per hour to prevent the windings from overheating, with the number depending on their size and the inertial loading on their shaft. For a 15-hp motor, the typical maximum number of starts would be 8 to 10 per hour. For larger motors (over 250 hp), only one start per hour may be allowed, or perhaps less depending on the starting method. 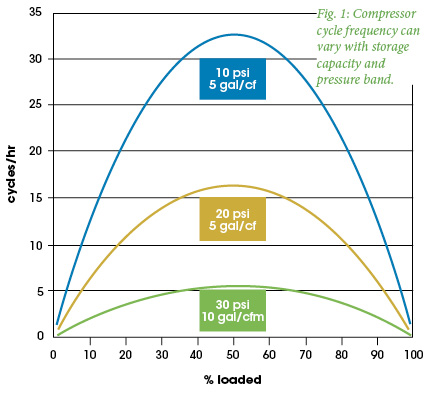 This, therefore, is part of the answer to the problem. If you are replacing your shop reciprocating compressor with a screw, you must install it with larger than normal storage and use a wider than normal pressure band to ensure it doesn’t cost you additional power. You must also ensure the compressor control is “smart” enough to turn the compressor off between cycles rather than running unloaded. (For more information, read “Is Your Compressor Control Smarter than a Four Year Old?” in the Tech Directory 2014 issue.)