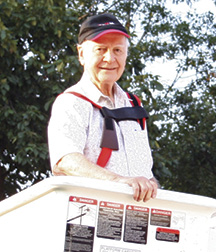 Raymond F. Hanley, a tremendous advocate of the IFPS and fluid power industry, passed away near his home in Jacksonville, Fla., on May 30, 2015.

Mr. Hanley was born February 10, 1926 to Russell and Sidonia Hanley in Glassport, Pa. He enlisted in the United States Navy during World War II and served on a ship in the South Pacific. In between island bombardments, escort duty, riding out typhoons, and chasing/guarding enemy submarines, he communicated with stateside schools and companies in anticipation of WWII ending and the resumption of his normal civilian life. He was discharged from the Navy in 1946 and entered the University of Pittsburgh under the GI Bill to study Mechanical Engineering. He started a floor sanding and refinishing business to pay for books, transportation, and other essentials. He graduated in 1949 with a Bachelor of Science degree.

When Mr. Hanley landed a job with Westinghouse Airbrake Company in its new industrial pneumatic division, he thought it would be an interim position; however, pneumatic fluid power took him on a different type of journey – one that led him to marine, oilfield, aircraft, and other military projects. In 1959, he started Circuit Engineering, his own fluid power business.

His passion and dedication to the fluid power industry is legendary. His significant contribution to IFPS certifications, and their accompanying study manuals, led to his being named the first and (so far) only IFPS Emeritus Certificate holder. The Raymond F. Hanley Scholarship, offered through the Fluid Power Educational Foundation, was established in 2014. The National Fluid Power Association conferred its 1993 Achievement Award to Mr. Hanley in recognition of his outstanding leadership and service to the fluid power industry and achievements in fluid power education.

Mr. Hanley married Ercel Dean Thomas in 1950, and they lived in Dallas, Tex.; Falls Church, Va.,; and finally settled in Jacksonville, Fla. Ercel Hanley passed away in 2000. Mr. Hanley is survived by his eight children, four grandchildren, and two great grandchildren. His hobbies included dancing, camping, fishing, and enjoying a lot of seafood.