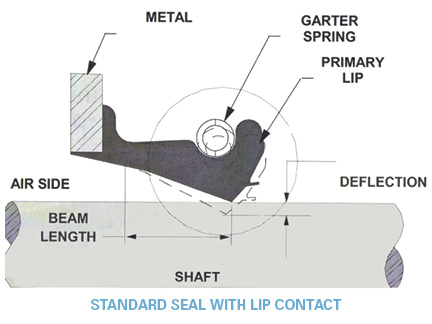 Standard shaft seals are designed for pressures from 0 to 7 psi. Slightly increasing this pressure could result in forcing more of the air side of the seal lip down onto the shaft. As the shaft turns, there is more lip contact on the shaft, which can cause greater lip wear. A conventional seal design with a single spring-loaded NBR lip and metal case has a useful seal life of 2,000 hours with a shaft speed of 1,000 rpm or less. The resultant seal lip wear is approximately 0.025″. If the pressure in this environment is increased to greater than 10 psi, the seal lip wear increases by a factor of at least four, and the resultant seal lip life is reduced to less than 20% of the design limits for standard seals. This is a dramatic decrease in seal life with just a slight increase in pressure. 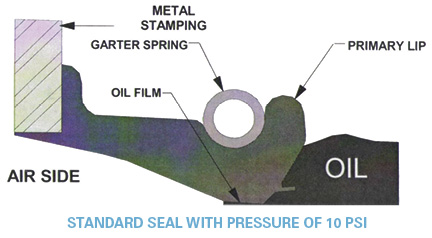 There are several other pressure-related factors that affect the life of the seal, such as excessive dirt, debris, or other contaminants. When these are found in or near the seal lip surface, they can cause higher pressures at the seal lip contact point. As a result of these higher pressures, the seal lip life may be adversely affected. Higher pressures could also distort the seal, causing the sealing lip to leave the shaft. This condition is known as “bell mouthing,” resulting in the sealing portion of the lip showing little or no wear, and the air side of the sealing lip showing heavy wear. This greater wear, as expected, also shortens seal life. In extreme, high-pressure scenarios, the seal could be forced out of the bore or even have the rubber-to-metal bond torn. To reduce the effect of slightly higher pressures in a lip seal environment, several alternative designs are available. 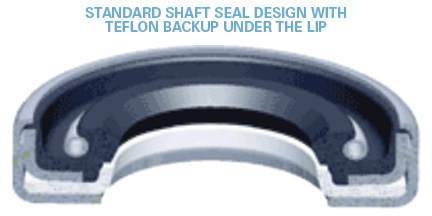 If your environment is known to have an increased presence of dirt or debris, adding a secondary lip to the seal that will exclude these contaminants should reduce the potential pressure increase and thereby increase the probability that your seal life will attain its desired lifespan. Without changing the design of a standard seal that is operating with a lubricant, increasing the sump level should also reduce the lip contact area when the lip is subject to slightly higher pressures. To meet higher pressures, there are a number of non-standard shaft seals available. These non-standard designs are characterized by shorter lip lengths, increased beam thickness, or heavier cross sections in order to minimize distortion in a higher pressured environment, a greater bonding area between the lip and metal case (unless an all-rubber cover shaft seal is used), and the use of a snap ring or flange to ensure that the seal case is retained in the bore. For applications requiring pressures of 100 psi, a backup ring of Teflon (PTFE) is used.

There are also other factors to be considered when designing a shaft seal for higher pressures, so it is recommended that a seal designer ensure that the optimal design is provided for an application.