ISO 4406: Method for Coding the Level of Contamination by Solid Particles

It has been estimated, in commonly available literature1, that between 75 and 90 percent of hydraulic system failures may be attributed to contamination issues. Automatic particle counting provides a cost-effective way to monitor fluid cleanliness levels and ensure reliable equipment operation. Particle count data is expressed in terms of the number concentration of particles larger than a certain size per unit volume of fluid. Unfortunately, interpretation of the raw particle count data is not always straightforward. Analysts must consider concentration data for at least three different particle sizes.

As shown in Fig. 1, the magnitudes of the concentration data for these sizes typically ranges over 2 to 3 orders of magnitude, while the slope of concentration versus size data provides important context for the interpretation. Fortunately, ISO 4406 provides a simplified method of communicating this complex information in a way that facilitates both interpretation and understanding of particle count data. 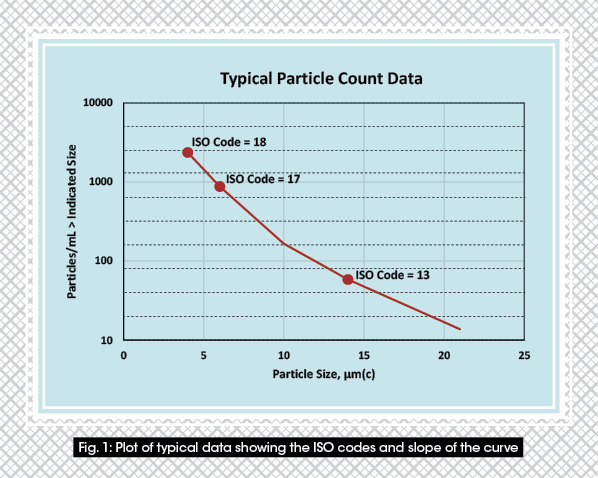 ISO 4406 provides a standardized method of reporting particle count data. Commonly known as the ISO Code, ISO 4406 reports data in the form of X/Y/Z, where X, Y, and Z are integers whose values correspond to the number concentration of particles larger than 4, 6, and 14 µm(c). For hydraulic, engine, and aerospace applications involving petroleum-based fluids, particle size is reported in µm(c) to indicate that the particle counter was calibrated according to NIST-traceable ISO 11171. The values of the integers are obtained by relating the actual particle count data to values given in the standard (refer to Table 1 from ISO 4406).

To most, this is information overload. On the other hand, this same sample corresponds to an ISO code of 18/17/13. This tells us how clean the oil is and that there are twice as many particles larger than 4 µm(c) as at 6 µm(c) particles, and 16 times as many larger than 6 µm(c) than at 14 µm(c) particles. This can be quickly compared to system cleanliness specifications to determine what, if any, service is required. 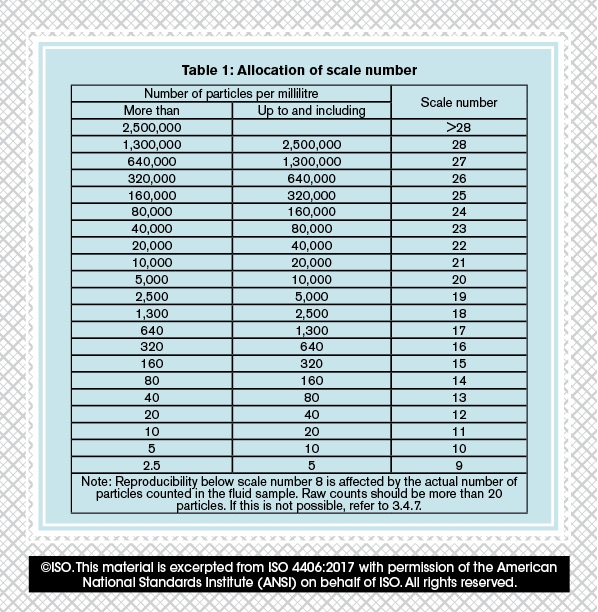 ISO 4406 is widely used in hydraulic and diesel fuel applications. It is used to report cleanliness levels and verify pass/fail criteria for new hydraulic oil and diesel fuel shipments. ISO code data from equipment rolling off assembly lines can be used as a quality tool to ensure system cleanliness and reduce warranty costs. It is also used as a tool to track historical fluid cleanliness levels in operating equipment. This enables operators to monitor equipment condition, troubleshoot problems, optimize service intervals, and reduce unscheduled downtime.

Given the importance of contaminant control for hydraulic and diesel engine applications, the value of ISO 4406 in communicating fluid and system cleanliness in a clear, concise manner cannot be overstated.