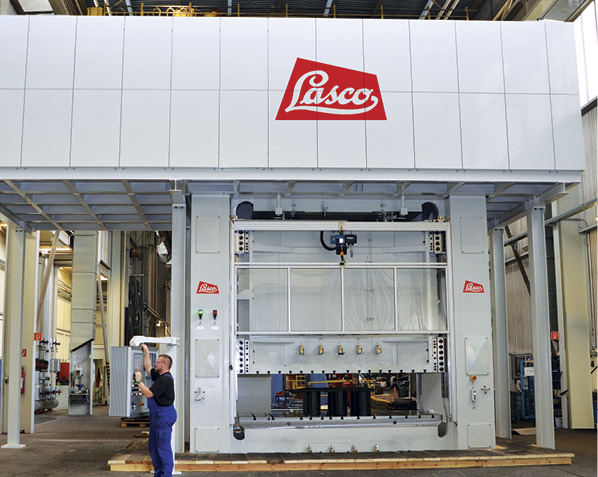 When Lasco was first founded in 1863, the main focus was on the iron foundry. However, just a few years later, the company began producing water turbines, followed by forging machines in 1880. Since then, the concentration has been on producing machines for forming technology worldwide.

“As a solution provider, we develop customized systems for optimized workpiece transport within the press, as well as for feeding and removing workpieces,” Barnickel said. The company has a strong focus on continuous improvement in its processes and technology. The servo technology mentioned above is exactly this kind of technological milestone, as demonstrated through Lasco’s implementation in a recently delivered deep-drawing press with a press force of 800 tons for up to 40 strokes per minute.

“The innovative servo technology that we have developed for hydraulic presses was previously not available on the market.” -Harald Barnickel

A Fast Controller at the Core

At the core of this type of solution is a Simotics 1PH8 servomotor from Siemens, which directly drives the hydraulic pump. This drive is controlled by the Sinamics S120 drive platform. A Simotion D445 motion control system handles the complete path, velocity, and position control of the axes (the Simotion controller and Sinamics drive are both from the same manufacturer). With a response time of 250 µs, up to 256 axes can be rapidly synchronized, and precise axis motion and curve profiles are executed. This applies to the closed-loop control performance, as well as to its energy efficiency and the application as a whole.

The challenge on the deep-drawing press was to control the press force and press speed, based on a motion profile that could be set individually. The hydraulic force, and thus the press force, can be adjusted at the servomotor by means of the torque. The plunger speed is controlled by the motor speed and thus by the volumetric flow rate of the pump. For the project described, axial reciprocating pumps with a fixed displacement per revolution were used.

Scalability of the Pump Systems is a Significant Advantage

Four such pump systems connected simultaneously for a maximum pressure of 250 bar supply the pressure line for the press stroke of the plunger; three additional pump systems are responsible for the return stroke of the press plunger. “The possibility of scaling—in other words, adapting this kind of standard servo solution to the actual requirements—is another advantage of this new technology that certainly cannot be underestimated,” said Barnickel.

The hydraulic oil tank of the deep-drawing press holds about 2377 gallons (9,000 liters). Because of the high flow rate of 16,000 l/min, filling valves are used for the fast, downward motion of the plunger. The servo pumps provide the required flow rate for the actual pressing operation, with a speed of up to 100 mm/s. In the past, high-precision control valves with zero overlap were necessary to obtain the precise traversing profiles. Today, this function is handled by the motion control system, in conjunction with the servo pumps. Thanks to this new technology, the valve systems in the press can be reduced by up to 40%. The remaining valve technology is mainly needed to comply with machine safety specifications.

As a result of the new technology, the expensive and traditional valve systems were eliminated, and energy efficiency has been significantly improved.

“In the past, the large cooling systems for the hydraulic oil had to be installed before the first test run at Lasco,” Barnickel said. “But now, with servo technology, significantly smaller units can be used, and they are not required until the press is actually operational at the customer’s facility.”

One reason for this is that the oil is no longer forced through the narrow gaps at the control edges of the control valves, which means that these types of technology-related losses no longer occur in the first place. The press manufacturer is seeing efficiency improvements well into the double-digit range depending on the application, significantly reducing users’ electricity costs, compared to older machines.

When comparing the new technology with very basic hydraulic presses using conventional technology, the amount of energy saved is certainly less than with presses equipped with complex control systems. The energy-saving effect is especially apparent during the drawing operation, during which the drawing pressure is provided by a pump equipped with a servomotor, with the motor of the die cushion pump thereby operating as a generator.

Another advantage of the electrical system used here is that energy can actually be recovered when the hydraulic fluid decompresses. This happens when the system is decompressed after the pressing operation and the main cylinder pressure must be reduced from 250 bar down to approximately 10 bar before the filling valve to the tank can be released. This operation takes approximately 100 ms. In the case of a compressibility of the hydraulic oil used of approximately 2.5% by volume, with a cylinder volume of approximately 800 liters of oil, the “spring energy” in the oil flows through the axial reciprocating pump and drives the servomotor. This effect is amplified when the press mechanical system is relieved. In this so-called generator or regenerative operation, the corresponding electrical energy is fed into the DC link of the S120 drive during each cycle. “However, in addition to the energy recovered, the other advantage is that there are no additional power losses in the form of heat, as would be the case with conventional concepts,” Barnickel said.

Straightforward Optimization — and Everything Immediately Documented

Although the Siemens Simotion controller has been specifically optimized to address motion-control applications, Simotion can also control the complete system. However, Lasco’s philosophy is to separate the various press tasks and therefore a separate PLC is used for the system control. As a fail-safe control, this also addresses the safety technology requirements. Simotion can be programmed in various ways, for instance, with high-level-language, graphic programming, or Motion Control Chart (MCC), as well as a classic logic control. The trace function with eight-channel plotter supports commissioning engineers and ensures detailed documentation of the press operation. Control parameters are saved in the drive, guaranteeing seamless documentation of the drive system.

In addition, the fail-safe Simatic S7-319 F 3PN/DP PLC from Siemens, used here as the press system control, allows all safety technology to be implemented without any major additional expense. The fail-safe signals are read via distributed Simatic ET200S I/O stations from the same manufacturer and transferred to the control via Profisafe. This represents a simple yet complete solution for Barnickel, who said, “As a consequence, we obtain a clear machine structure.”

For instance, there are generally two monitored valves that monitor the reduced traversing speed of the plunger when setting up. The new solution is far more precise, where the fail-safe S120 drive also monitors the reduced speed (Safely Limited Speed: SLS) as well as a safe stop (Safe Stop 1: SS1).

The press experts at Lasco also view the integrated, seamless nature of the Siemens systems as an additional benefit. For example, the drive automatically identifies the servomotor and reads its parameters. Another interesting feature of this servo solution is that the 1PH8 motors are available either as synchronous or asynchronous motors. The application itself, or more specifically, the dynamic performance required, is the decisive element in selecting the appropriate motor type, according to Barnickel.

Both versions have the same mechanical mounting dimensions, the same wiring, and the same encoder connection. Here, too, this technology has some significant advantages. For instance, instead of a typical 17-core cable, a single cable with RJ45 connector is sufficient.

And finally, this new drive concept for hydraulic presses, based on a servo-electric pump control, results in a significant overall improvement: “In addition to the energy savings, its extremely precise controllability is far superior to that of a classic valve control,” said Barnickel. As he further noted, any defined motion profiles can be precisely implemented using this concept.

The motion control system has also proven itself to be extremely valuable in certain steps of the pressing process. For instance, if the plunger moves to upper dead center, then the closed-loop position control in Simotion ensures that any leakages are compensated. “A far higher precision is achieved when using servo technology than when using pure valve technology,” Barnickel said.

The development of new servo technology for large hydraulic presses, based on the Simotion motion control system from Siemens, has already awakened significant interest among customers of Lasco Umformtechnik GmbH. However, it is not only when building new machines that this dynamic company of 400 employees benefits from lower costs and improved quality; the drive concept described is also suitable for modernization and retrofit projects.

With the standard concept, comprising the Simotics 1PH8 servomotor, the Sinamics S120 drive platform and the motion control unit, Lasco Umformtechnik GmbH has clearly demonstrated that, when hydraulic presses are equipped with servo-electric pump drives instead of pure valve technology, the dynamic performance, precision, and especially energy consumption on the press are improved. This results in tangible press improvements that are decisive in the marketplace.  For Barnickel, it’s clear: “Anyone who addresses the challenges of press technology with E-motion (energy in motion) is creating innovation.”