A clogged supply chain and rising prices slowed U.S. manufacturing activity in March, according to numbers released April 1 by the Institute for Supply Management.

ISM’s Purchasing Manager’s Index fell to 57.1 in March, down from 58.6 in February. The March PMI was the lowest reading since the September 2020 reading of 55.4%. A PMI above 50% indicates growth in the manufacturing sector.

“In March, progress was made to solve the labor shortage problems at all tiers of the supply chain, which will result in improved factory throughput and supplier deliveries. Panelists reported lower rates of quits and early retirements compared to previous months, as well as improving internal and supplier labor positions. March brought back increasing rates of price expansion, due primarily to instability in global energy markets. Suppliers are not waiting to experience the full impacts of price increases before negotiating with their customers.

“Panel sentiment remained strongly optimistic regarding demand, with six positive growth comments for every cautious comment, down from February’s ratio of
12-to-1,” Fiore added.

Improvement in global supply chains has been slowed by the war in Ukraine, which caused the prices of oil and other commodities to rise.

Panelists reported improvements in March hiring, but turnover continues to be a problem, causing difficulties in companies’ ability to adequately staff their firms. 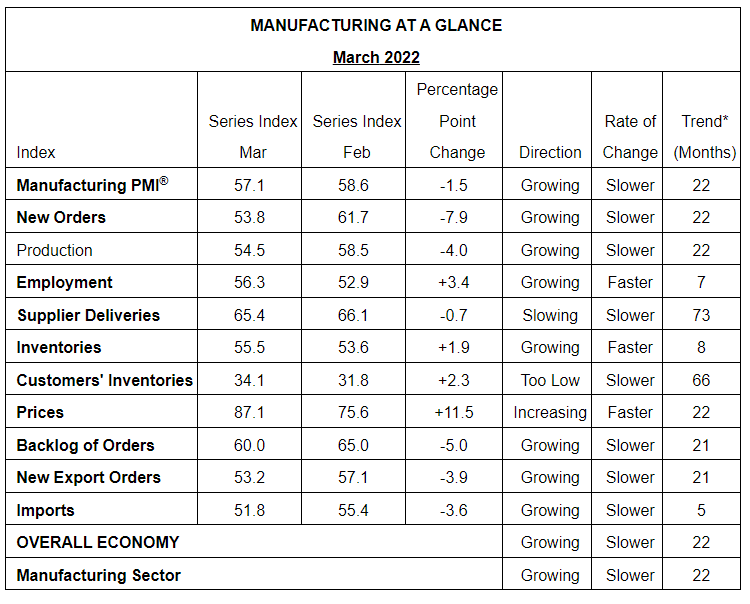