There’s more to the mounting requirements of a hydraulic swivel than meets the eye. Mounting rigidity and swivel torque are important design considerations, and it is important to understand how they interact with each other.

Each permutation of pressure and return flow creates a different torque value. Therefore, steady-state torque isn’t the only concern when dealing with the mounting requirements of a hydraulic swivel. The seals within the swivel have both static and dynamic friction. The static friction is much higher than the dynamic friction, and so the static resistance to rotation in a hydraulic swivel will be much higher than the dynamic resistance to rotation. 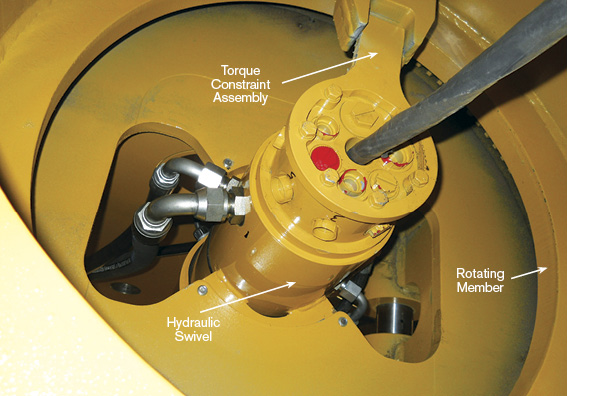 Understanding the difference between static and dynamic friction is very important. It is the cause of chatter that develops within an assembly that contains a hydraulic swivel.

The “torque constraint assembly” (typically a weldment that cradles the torque arm of the swivel) is the mechanical link between the rotating member and the hydraulic swivel (See image above).

The whole process happens many times per second (100 Hz potentially) depending on the natural frequency of the torque constraint assembly. This frequency is usually within the audible range of humans, so when it occurs, it makes a large noise that can be heard and felt. It is not the swivel that is chattering; it is the torque constraint assembly and mounting that are the source of the noise.

There are several best practices that provide the optimal mounting and torque-restraint features and reduce the risk of several potential failure modes, including the elimination or prevention of hydraulic swivel chatter:

The goal is to create an assembly with as little potential for flexing as possible. Bracing, triangulation, and keeping the rotational torque constraint as short as possible are required to eliminate potential problems. It is difficult to provide specific design guidelines, as there is a huge variety of applications for hydraulic swivels. Working closely with your design engineers early in the design process will ensure your assembly and the hydraulic swivel will live together for many, many years.

Brady Haugo is a design engineer for United Equipment Accessories (UEA). He has work experience as both a design engineer and test engineer, and received an MBA degree in Mechanical Engineering. Learn more about UEA at www.uea-inc.com.