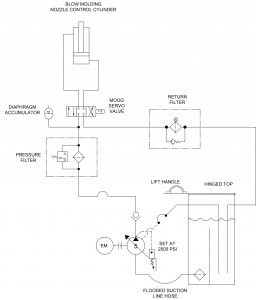 A company that manufactures plastic bottles for suppliers of motor oil started losing pressure-compensated pumps weekly on one of four identical units. The system used a servo valve for controlling a cylinder that had to maintain a position very accurately, and both oscillated continually. They could not understand why three units worked fine but one gave them problems.

The 5-gpm (19-lpm) pumps were internally grenadeing. After each failure, they cleaned the entire system of debris, changed the filter elements, inspected the case line for broken pump parts, and installed a new intake-line hose, but they were still losing pumps on an average of one a week, a total of four pumps when I was called into help.