Fluid power companies should expect a mild recession next year, according to ITR Economics, which monitors the economy for the National Fluid Power Association.

ITR is forecasting a slowdown in 2023. In a Nov. 9 webinar, ITR economist Patrick Luce called the slowdown a “mild recession,” which he frequently qualified by calling it a contraction.

No one should panic, Luce said, because it will be a slowdown, not a collapse.

While recent data caused ITR to adjust its forecasts for 2022, 2023, and 2024, it has not changed its previous forecast calling for a major recession on the horizon.

“We have been calling for a mid-decade recession, more in the 2025-2026 timeline,” Luce said. “The rise of interest rates has the potential to pull that forward into our 2024 outlook. We’re analyzing it.”

“Right now, we are expecting slowing growth – but still growth,” Luce said. “Things are, from a financial and economic perspective, looking good.”

ITR’s forecasts for fluid power products follow trends similar to those of the overall U.S. economy: growth continues, but the rate of growth is slowing, and fluid power will experience a mild recession next year before rebounding in 2024. 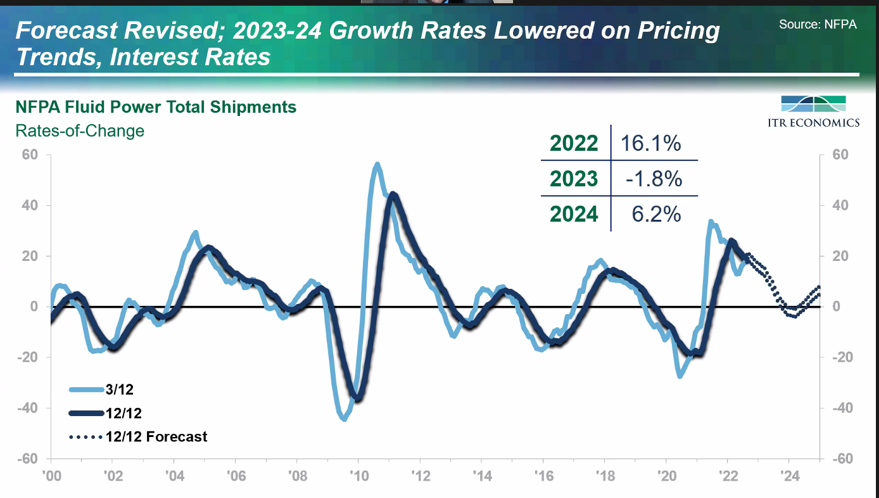 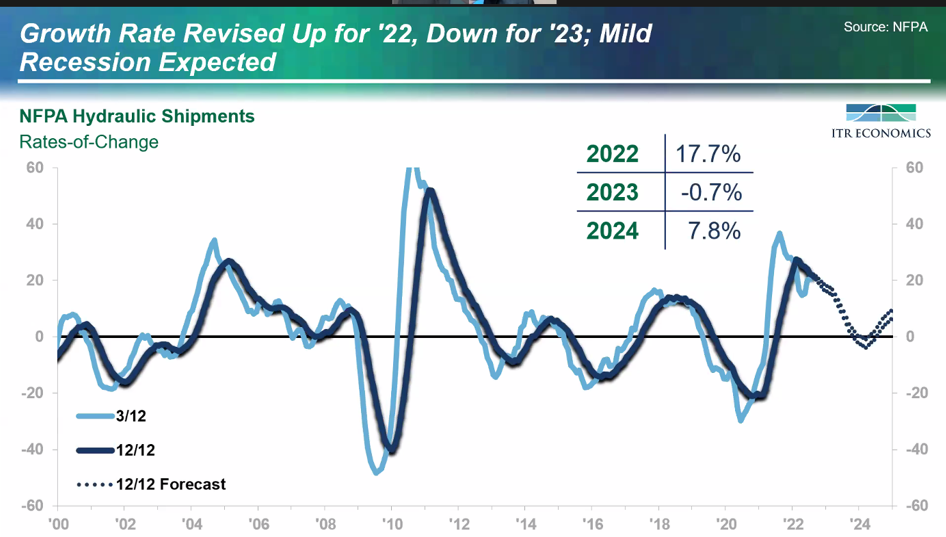 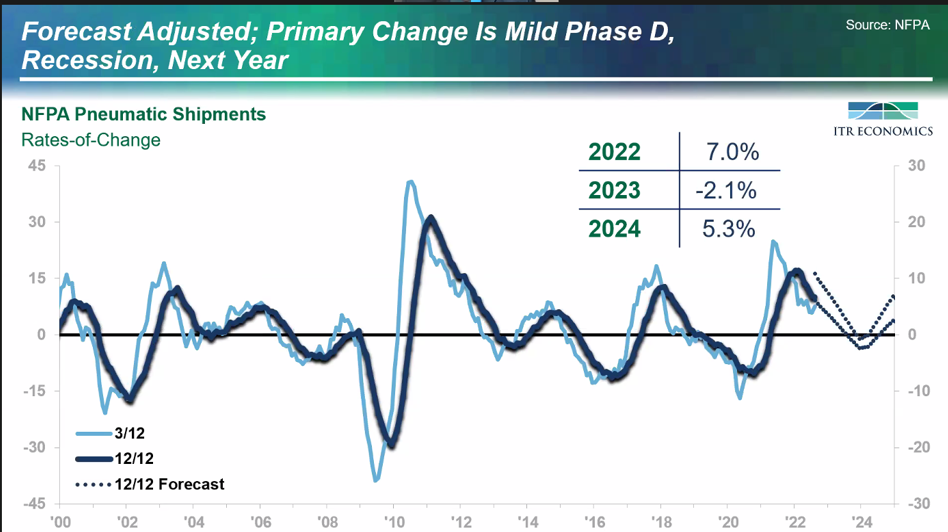 Luce stressed repeatedly that the slowdown next year will be “mild” and nothing like the recession of 15 years ago.

“Don’t plan for a 2008-2009 recession,” Luce said. He said next year’s mild contraction is a “normalization” after the chaos of the pandemic years.

“It’s time to catch your breath a bit,” Luce said. “Get your footing back underneath you. Make sure you have training in place. Make sure your teams are prepared.”

He encouraged companies to take advantage of the slowdown and find opportunities for long-term planning and strategizing, efficiency improvements, identifying new opportunities, and scheduling maintenance downtime.

“Make sure that you are ready when that rising trend takes hold” in 2024, Luce said.

ITR forecasts many fluid power markets to experience similar slowing trends next year before rebounding in 2024.

“This is one of the markets that we are expecting to have a recession,” Luce said.

He called construction machinery “an interest-rate-sensitive industry” that is impacted by low housing starts and softer demand.

The material handling market has experienced a strong rise from e-commerce, distribution, and onshoring trends, Luce said. It has recently seen slowing growth, and one reason could be interest rate instability, which poses a risk to machinery production, he said.

The semiconductor segment is experiencing positivity due to supply chain improvements. The industry reduced delivery times by four days in September, Luce said, adding that we’re at “the turning point in the global semiconductor shortage.”

In the U.S. semiconductor industry, “Help is on the way,” Luce said, referring to domestic production incentives such as a 2022 law called CHIPS – Creating Helpful Incentives to Produce Semiconductors. It promises $280 billion for, among other things, production of semiconductors.

Such help will be slow to arrive, Luce said, and it will be a long time before the industry can ramp up to production levels that ease or eliminate the shortage.

North American light vehicle production and U.S heavy duty production are “two core industries that are bucking the slowing-growth macroeconomic trends” seen elsewhere in the economy, Luce said, noting that demand is high in both markets, and both are in rising trends.

“We are calling for growth through next year, hitting a peak in 2023, and entering a slowing-growth phase,” Luce said. Companies in the vehicle space, he said, have “a good countercyclical hedge.”

Luce said the U.S. economy continues to face volatility on several fronts. One is labor. The skills gap and record numbers of job openings are both growing.

“There are about two jobs for every unemployed person,” Luce said. “Labor availability is going to continue to be an issue throughout this decade.”

Another ongoing risk is rising interest rates. Interest rate increases affect housing and vehicle markets, among others. And increasing rates usually take longer than a month or two to manifest their benefits, Luce said.

“Rising interest rates pose a risk to the core markets,” Luce said, encouraging companies to “know the risks of your markets.”

Inflation came in at 7.7% for October, a drop from September’s figure of 8.3% and lower than the 8% economists had expected. Economists expect the Fed to announce a 0.5-point interest rate rise in December, according to the Wall Street Journal. More increases could come next year, the newspaper said.