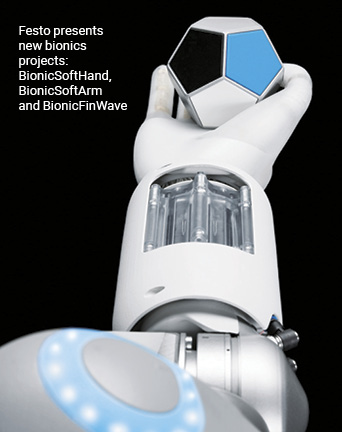 Whether its grabbing, holding, touching, or typing — in everyday life, we use our hands as a matter of course for the most diverse tasks. In that regard, the human hand, with its unique combination of power, dexterity, and fine motor skills, is a true miracle tool of nature. What could be more natural than equipping robots in collaborative workspaces with a gripper that is a replica of this model of nature that also solves various tasks by learning through artificial intelligence? Festo introduced their pneumatic robot hand BionicSoftHand at Hannover Fair 2019. Combined with the BionicSoftArm, a pneumatic lightweight robot, the Future Concepts are suitable for human-robot collaboration.

The BionicSoftHand is pneumatically operated, so that it can interact safely and directly with people. Unlike the human hand, the device has no bones. Its fingers consist of flexible bellows structured with air chambers. The bellows are enclosed in the fingers by a special 3D textile coat knitted from both elastic and high-strength threads. With the help of the textile, it is possible to determine exactly where the structure expands and generates power, as well as where it is prevented from expanding. This makes it light, flexible, adaptable, and sensitive, yet capable of exerting strong forces.

The learning methods of machines are comparable to those of humans: either in a positive or a negative way. They require feedback following their actions in order to classify and learn from them. BionicSoftHand uses this method of reinforcement learning.

Instead of imitating a specific action, the hand is merely given a goal and it uses the trial and error method to achieve it. Based on received feedback, it gradually optimizes its actions until the task is finally solved successfully.

Specifically, the BionicSoftHand should rotate a 12-sided cube so that a previously defined side points upwards at the end. The necessary movement strategy is taught in a virtual environment with the aid of a digital twin, which is created with the help of data from a depth-sensing camera via computer vision and the algorithms of artificial intelligence.

In order to keep the effort of tubing the BionicSoftHand as low as possible, the developers have specially designed a small, digitally controlled valve terminal, which is mounted directly on the hand. This means that the tubes for controlling the gripper fingers do not have to be pulled through the entire robot arm. Thus, the BionicSoftHand can be quickly and easily connected and operated with only one tube each for supply air and exhaust air. With the proportional piezo valves used, the movements of the fingers can be precisely controlled.

The strict separation between the manual work of the factory worker and the automated actions of the robot is being increasingly set aside. Their work ranges are overlapping and merging into a collaborative working space. In this way, human and machine will be able to simultaneously work together on the same workpiece or component in the future — without having to be shielded from each other for safety reasons. 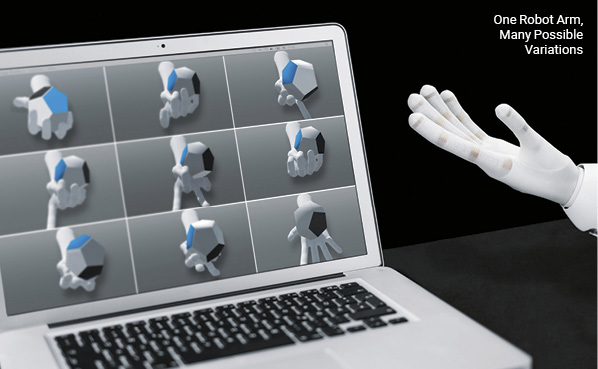 The BionicSoftArm is a compact development of Festo’s BionicMotionRobot, whose range of applications has been significantly expanded. This is made possible by its modular design: It can be combined with up to seven pneumatic bellows segments and rotary drives. This guarantees maximum flexibility in terms of reach and mobility, thus enabling it to work around obstacles even in the tightest of spaces, if necessary. At the same time, it is completely flexible and can work safely with people. Direct human-robot collaboration is possible with the BionicSoftArm, as well as its use in classic SCARA applications, such as pick-and-place tasks.

The modular robot arm can be used for a wide variety of applications, depending on the design and mounted gripper. Thanks to its flexible kinematics, the BionicSoftArm can interact directly and safely with humans. At the same time, the kinematics make it easier for it to adapt to different tasks at various locations in production environments: the elimination of costly safety devices, such as cages and light barriers, shortens conversion times, and thus enables flexible use — completely in accordance with adaptive and economical production. 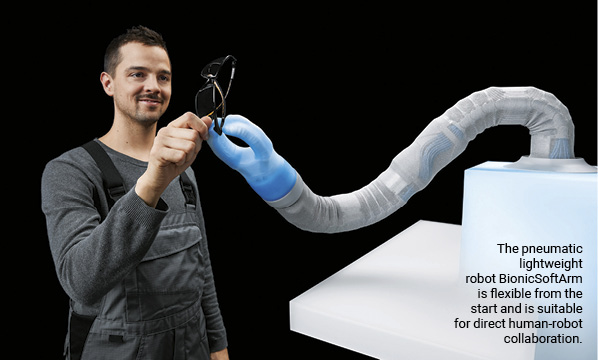 Nature teaches us impressively, what optimal drive systems for certain swimming movements should look like. To move forward, the marine planarian and sepia create a continuous wave with their fins, which advances along their entire length. For the BionicFinWave, the bionics team was inspired by this undulating fin movement. The undulation pushes the water backwards, creating a forward thrust. This principle allows the BionicFinWave to maneuver forwards or backwards through an acrylic tube system.

Its two side fins are completely cast out of silicone and do not require struts or other supporting elements. The two fins are attached to the left and right of nine small lever arms, which in turn are powered by two servo motors. Two adjacent crankshafts transmit the force to the levers so that the two fins can be moved individually to generate different shaft patterns. They are particularly suitable for slow and precise locomotion and whirl up less water than, for example, a screw drive. A cardan joint is located between each lever segment to ensure that the crankshafts are flexible. For this purpose, the crankshafts including the joints and the connecting rod are made of plastic in one piece using the 3D printing process.

Intelligent Interaction of a Wide Variety of Components

The remaining elements in the BionicFinWave’s body are also 3D-printed, which enables its complex geometries in the first place. With their cavities, they act as flotation units. At the same time, the entire control and regulation technology are watertight, safely installed and synchronized in a very tight space.

New Impulses and Approaches for the Process Industry

With the bionic technology carrier, our Bionic Learning Network once again provides an impulse for future work with autonomous robots and new drivetrain technologies in liquid media. It would be conceivable to further develop concepts such as the BionicFinWave for tasks such as inspections, measurement series, or data collections.