The Pressure Is On!

Most industrial vacuum applications involve the picking up or transfer of products, such as vacuum pick-and-place or material conveying. This article discusses the effectiveness and cautionary notes to consider when these applications are employed in facilities that are located at altitude.

Vacuum can be defined in many ways: a volume devoid of matter, a volume comprised of a lower atmospheric pressure than that surrounding it, a space in which all or most of the “air” has been removed, etc. So the following explains and demonstrates what this actually means and how it relates to problems often experienced by factories using vacuum mechanics at higher altitudes.

Have you ever traveled on a plane and taken advantage of the so-called complimentary snack and beverage service—the tiny, fun-size pack of peanuts or indescribable dry, dusty, savory something or other that is supposed to tide you over until your destination? When presented with this snack, you’ll notice that the bag in which it has been packaged is inflated. The reason is very simple: food products are packaged near sea level in most cases, which for all intents and purposes has an atmospheric pressure between 13psi(a) and 14.7psi(a) depending on their location. Of course there are cities that have much lower atmospheric pressures, which we’ll get to later.

Commercial passenger planes have pressurized cabins. It is a common misconception that the cabins are pressurized to a “normal” atmospheric pressure [14.7psi(a)] during flight. This is not the case.

You could argue that if the snack was packaged in a factory in Colorado, which has a very high elevation above sea level, then the internal pressure would be about 11.7psi(a), and therefore the differential at 8,000 feet above sea level would only be 0.8 psi. The packet would be less “inflated” than a similar product packaged in Los Angeles. In fact, it would look like it’s under vacuum when presented in Los Angeles due to the “higher-than-packaged” atmospheric pressure.

Fig. 1 shows a snack pack on an aircraft and chip bags stocked on shelves in Denver. As you can see, these packages were certainly packaged at a facility near sea level!

All interesting stuff, I’m sure you’ll agree. However, in industrial applications, altitude can have a significant effect on machine performance. The end-of-arm tool shown in Fig. 2 utilizes an array of 140 vacuum cups of 40-mm diameter.  At sea level, such as in Los Angeles, with a vacuum source generating 27″Hg (90% vacuum), these suction cups, used together, can theoretically lift a load of 2,986 lbs (1,357 kg). The vacuum pump that is able to generate 27″Hg is still able to perform to the same absolute pressure wherever it is used. BUT the differential pressure, which is what defines the lifting force, will reduce at altitude. For example, in Denver, Co., the atmospheric pressure is about 11.78 psi(a) compared to Los Angeles, Calif., which is 14.7psi(a). Therefore, in Los Angeles, the differential pressure is 13.23 psi with a pump than can generate a 27″Hg vacuum level. In Denver, the differential would drop to 10.3 psi, a 22% reduction. Consequently, the tool shown in Fig. 2 will have a lifting capacity of 2,329 lbs (1,058 kg). Now, it’s rare that a tool as shown in Fig. 2 is being used to its maximum lift capacity. 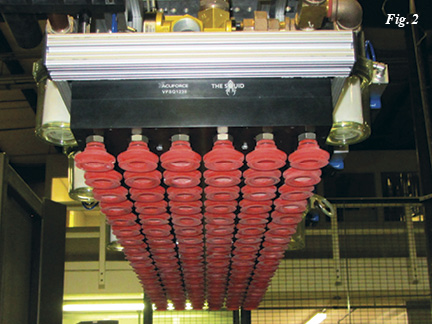 In a more realistic comparison, a 4″ (100-mm) diameter cup being used in Los Angeles can lift 155 lbs (70 kg) with a pump capable of 27″Hg vacuum generation, whereas in Denver, the exact same vacuum cup can only lift 120 lbs (55 kg). This could be a real problem on a machine that has a low safety factor in its design.

As shown in the table, the vacuum pump is able to generate a 90% vacuum, which is 100 mbar(a), 1.47psi(a), and in the case of inches of mercury, 29.92″Hg if measured at sea level. The psi(a) and mbar(a) scales are both absolute measurements, and therefore, regardless of the atmospheric pressure, they both remain a constant, as their datum point of zero does not change. However, in the case of “Hg, this is a differential scale from full atmospheric pressure, which in Denver would not be applicable. To accurately measure a vacuum level, an absolute scale should always be used. 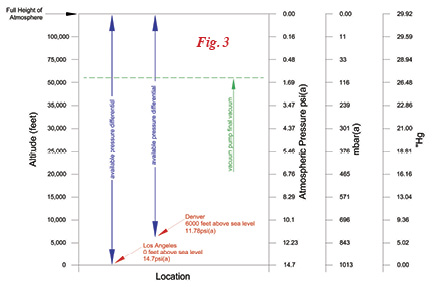 Interestingly, vacuum cups have the highest lifting capacity on the shores of the Dead Sea in Israel, which is the lowest point on earth. This area is 1,401 ft (427 m) below sea level. The average atmospheric pressure is 15.45psi(a). Therefore, the 100-mm vacuum cup described previously will have a lifting capacity of 163 lbs compared to the 155 lbs it can lift in Los Angeles using a vacuum pump with a maximum vacuum level of 100 mbar(a).

Although the above numbers are real-world facts, they are rarely considered in machine design, and you could argue that it’s rare that they would need to be. However, there is manufacturing happening in high-altitude locations such as Denver, Colorado at 5,300 ft (1,610 m); Mexico City, Mexico at 7,350 ft (2,240 m); and Ankara, Turkey at 3,100 ft (938 m), to name but a few. Vacuum is a very common technology used in very common industries, such as food packaging, palletizing, box handling, material conveying, pharmaceutical manufacturing, and so on, all of which are found throughout the world and in use in every industrial arena.

This article is intended as a general guide and as with any industrial application involving machinery choice, independent professional advice should be sought to ensure correct selection and installation.

Daniel Pascoe is General Manager of Vacuforce LLC, a manufacturer and distributor of vacuum components and systems for industry in North America. He can be reached via the Vacuforce website at www.vacuforce.com or directly at dpascoe@vacuforce.com. Find Vacuforce on Facebook and keep updated on Twitter.