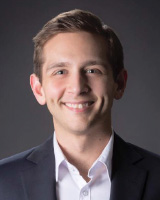 Scott Sardina is a licensed professional engineer, certified fluid power hydraulic specialist, and engineering manager for Controlled Fluids, Inc. He previously held multiple engineering positions in the hydraulic systems division of The Oilgear Company for eight years. Scott has a Bachelor of Science degree in Engineering Mechanics and Astronautics and Mathematics from the University of Wisconsin. He also has a Master of Science degree in Engineering Mechanics. He has worked on various demanding applications for forging, extrusion, aerospace, civil, and oil and gas industries. He has worked in all aspects of the project phase from design to project and applications engineering. Scott now resides in Houston, Tex., and is dedicated to managing the engineering team at Controlled Fluids, Inc. He is a member of the 2015 IFPS Board of Directors.

How did you get started in the fluid power industry?

As like many others, I accidentally stumbled upon the fluid power industry. I started as an intern at Oilgear in Milwaukee, Wis., after my freshman year of college. My career started in the hydraulic systems division, which introduced me to many different applications. I enjoy working with hydraulics due to the tribal knowledge, variety of applications, and its necessity in industry.

What have you gained, professionally and personally, by being involved in the IFPS?

My involvement with IFPS started with taking the Hydraulic Specialist certification exam. The more I learned about IFPS and its goals, the more I wanted to get involved. I’m a firm believer in educating people on fluid power, which is a large part of the organization. I was appointed to the IFPS Board of Directors in March 2015 and look forward to influencing the fluid power industry even further. Everyone in the organization is very passionate about what they do, which is great for the advancement of the organization and outreach of the industry.

Why did you decide to pursue IFPS certification, and how has it helped your career?

I was first introduced to the IFPS certifications in 2013 when one of my colleagues at the time was unable to take the Hydraulic Specialist exam, which opened up a slot for me. I was asked a week prior to the exam if I was interested. After some research on IFPS, I accepted and was successful in obtaining the certification. The CFPHS certification has helped me  stand out in the industry and demonstrate my dedication to fluid power.

What have you learned so far by working in the fluid power industry?

The fluid power industry truly is a niche market. There is an ever-growing need for people who understand hydraulics and how to properly apply it. Fluid power is all around us and affects our lives on a daily basis.

Where do you see the fluid power industry heading in the next 10 years?

Depending on the application or industry, there will be an increased use of environmentally friendly fluids with a high demand on efficiency. Also, I foresee system pressure requirements going beyond the standard 3000 and 5000 psi, along with a need for more wireless control. Think of controlling a system wirelessly with your phone. Some manufacturers are starting to do this with their products installed in hard-to-reach areas.

What advice would you give someone just starting out in the industry?

I have three pieces of advice:

What are some of your favorite hobbies or interests?

I enjoy training for marathons and triathlons in my free time. My ultimate goal is to run a marathon in every state. I have run eleven marathons and covered seven states. As for triathlon, I completed my second full Ironman in 2015 and have done multiple other triathlons in the past.

What is something people would be surprised to learn about you?

I have been in twelve operas and considered majoring in vocal performance instead of engineering.

Scott Sardina can be reached at scottjsardina@gmail.com.