Proportional Valve Selection—LVDT or no LVDT?

As proportional valve technology becomes more commonplace, new people are continuously tasked with applying, installing, and diagnosing proportional systems. When selecting a proportional valve for a given application, there are many features to take into consideration: flow rating, spool ratio and center condition, onboard electronics versus separate driver, and communication protocols, plus many features that are often specific to a particular manufacturer.

One fundamental choice is whether or not to select a valve with spool position feedback or Linear Variable Differential Transformer (LVDT). In a competitive market, a common thought is “the accuracy is not required so we decided to save cost.” Unfortunately, that common thought often becomes the case. However, let’s consider the ways an LVDT will benefit the end-user once the system is in the field. 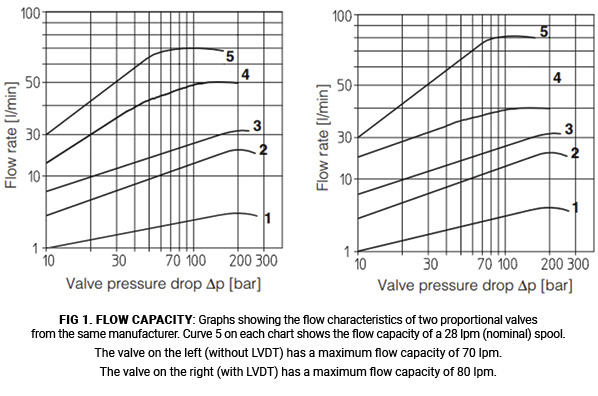 An LVDT monitors spool position sends the actual position to a driver or controller, which then sends a corrected signal to the valve’s solenoid. Due to internal friction, a valve without LVDT will have an accuracy of 1-2%, typically adequate for most applications. When we use a valve with LVDT, that accuracy will be advertised in the 0.1% range, a level that many will consider unnecessary for their simple application.

Because the feedback loop corrects in milliseconds, we can have a valve with LVDT that will shift 0 to 100% in 10 milliseconds in some cases. Compare this to a non-LVDT valve that will have a step response in 30-50 milliseconds. This is increasingly important in systems with changing commands that must be followed closely.

A valve without LVDT feedback is open-loop, where a command to the driver will then provide a current to the solenoid coil. This current will, in a linear manner, correspond to a force output. The force of the solenoid shifts the spool against a spring until the spring’s force is equal to the solenoid’s. This balance of forces should occur at a specific spool stroke (e.g., 50%). If internal flow forces prevent the valve from reaching the commanded position, there is no correction factor.

Valves with LVDTs are controlled differently. A command signal is given for the spool to shift to a specific position. If the spool does not achieve that position, current may be increased to a much higher value in order to get there. Turbulent flow forces in a valve act to drive the spool back against the solenoid’s shifting force. For this reason, you may see some manufacturers with a “10 liter” spool for a non-LVDT valve have lower maximum flow capacity than a “10 liter” valve with LVDT. Each valve will reach a point where the Bernoulli forces within the valve will overcome the solenoid, but this will happen at a lower value with the non-LVDT valve.

As discussed above, the ability for a valve with LVDT to correct its position is very helpful in instances where a valve may have to overcome silting after sitting at the zero position for a long time, particularly at higher system pressures. In most systems, fluid cleanliness is adequate (perhaps not ideal) and non-LVDT valves perform just fine. However, for more critical systems, perhaps there is a value for using a valve that is more likely to break free of such silting. For example, a valve without LVDT used to control a cylinder at 30% speed will only get 30% of the solenoid’s force to shift the spool, which may not be enough to move a spool that has silted in place. With an LVDT, the driver will see an error and correct, possibly driving 100% current to the solenoid in order to achieve position. For this reason, some manufacturers will list a higher maximum current for a valve with LVDT than for one without.

Having an LVDT on the valve is a valuable diagnostic tool for the field technician as well as for reliability engineers. If we can see that the spool is shifting as commanded, we eliminate the valve during troubleshooting of complex mechanical movements. This saves considerable time as you can eliminate the valve, driver, and field wiring as an issue, leaving you to focus on other aspects of the system or the machine itself.

For some critical applications, it may be desirable to continuously trend the spool position versus the commanded position. If an increased delay of a few milliseconds in actual position can be detected, the valve can then be replaced on a convenient downturn, prior to a hard failure.

Many may not consider the benefits of spool position feedback, but valuable ideas and experience can clearly demonstrate the merit of LVDT, and just may give your system the edge it needs in a highly competitive market.