Using Technology to See How Far a Pumpkin Can Fly 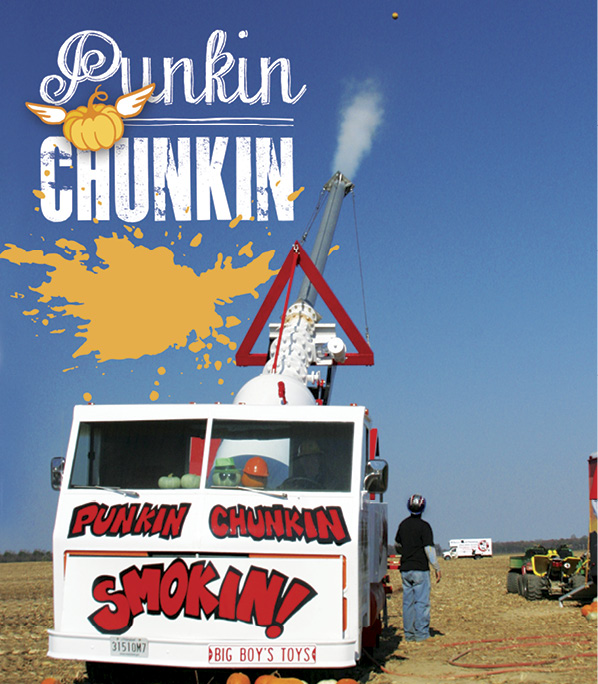 Each year, people converge on a piece of land with their trebuchets, catapults, torsions, and air cannons with one thing in mind: how far can my pumpkin fly?

The World Championship Punkin Chunkin Association (WCPCA) is a trademark nonprofit that raises money for scholarships, as well as organizations that benefit youth and the local community. It hosts a signature pumpkin-launching event each year, fueling innovative engineering and science-based ideas. The next event will be held on November 4-6, 2016 in Bridgeville, Del. 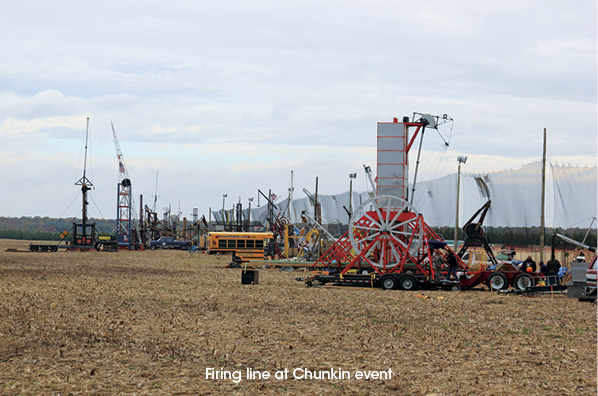 Tom Malatt is a member of the WCPCA safety crew and captain of the SMOKIN! team based in Frederick, Md. His team’s machine uses compressed air to operate a 14″ butterfly valve that releases air and propels the pumpkins. This air cannon uses a modified 500-gallon propane tank rated for 250 psi as the pressure vessel for the propulsion air. The tank has a neck and flange welded to one end for very fast air expulsion. The cannon is mounted on an old motorhome chassis.

The SMOKIN! machine has an onboard power station for pneumatic and hydraulic systems. The base of the station is a 100-gallon horizontal air tank with a mounting plate on top. The station is powered by a 12-hp engine salvaged from an old cub cadet lawn tractor. The engine drives a high-pressure/low-volume air compressor pump from one end of the crankshaft and a hydraulic pump from the other end of the shaft. Both pumps are belt driven from the engine, and the team only uses one system at a time. The hydraulic system also has a reservoir and spool/control valve mounted on the power station. The hydraulic hoses from the power station have quick couplers that hook up to the cannon elevation cylinder hose system. Two cylinders having a 5″ bore and a 24″ stroke are used to elevate the cannon to as much as a 50-degree angle for competition shots. 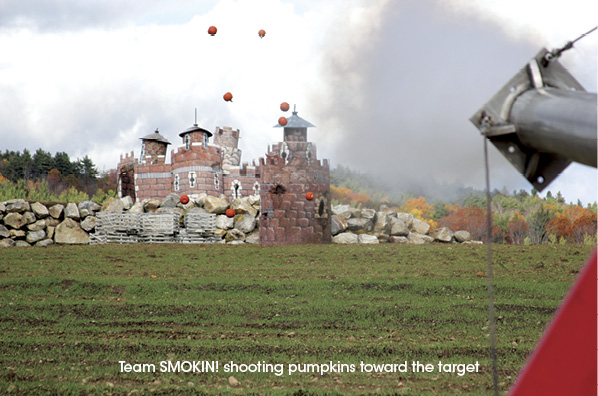 During fun and demonstration activities, the cannon is operated by a pneumatic system. It has two 30-gallon storage tanks, which are part of the steps to the breech for loading the cannon. The air in this system is controlled by a closed-center spool valve. Two half-inch hoses run between the control valve and the cylinder that operates the butterfly valve. Due to the size of the fittings and pins, as well as the force needed to operate the 14″ valve, the team is using a hydraulic cylinder pneumatically. The way the system is set up, the team can load the cannon, pressurize the tank to about 50 psi, and fire a pumpkin projectile about every 2-5 minutes.

According to Mark Malatt, owner and blastermind of the SMOKIN! machine, “Much of our machine is built from recycled/repurposed materials (with some customization), designed to be assembled and operated without any extra equipment.” The machine’s best distance shot was 3,895 feet. 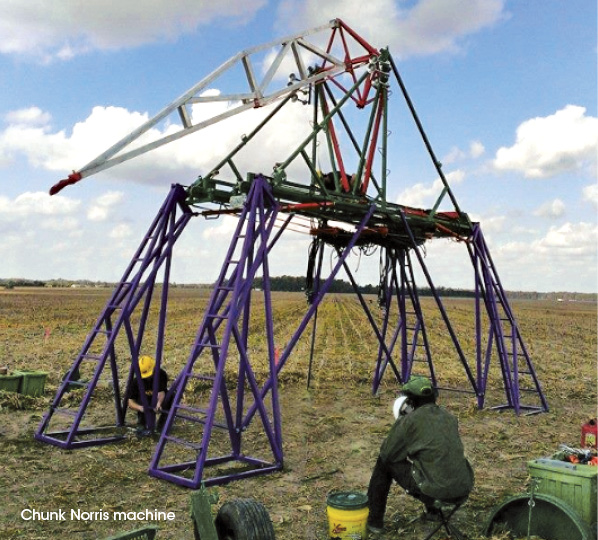 Another team that beat records with its machine is Chunk Norris, which competes with a catapult. The machine uses DC power units from Bailey Hydraulics to extend the legs of the machine and stretch the rubber bands while cocking.

According to Chunk Norris team captain, Mike Powers, “We were only shooting at 75% available power for the first two rounds, so for round three, we stacked on all the rest of the rubber bands we had and went for broke. It paid off when the shot left the machine at 376 mph and went straight and true. The distance came back at 2948 feet.” This set a new record, breaking the team’s previous distance of 2862 feet set in 2005.

The WCPCA competition is a weekend of festivities. Each team competes for a trophy by launching three pumpkins for distance, usually one per day. The longest launch for each team is used to determine the overall winner, as well as the leader for each class and age group within the classes. 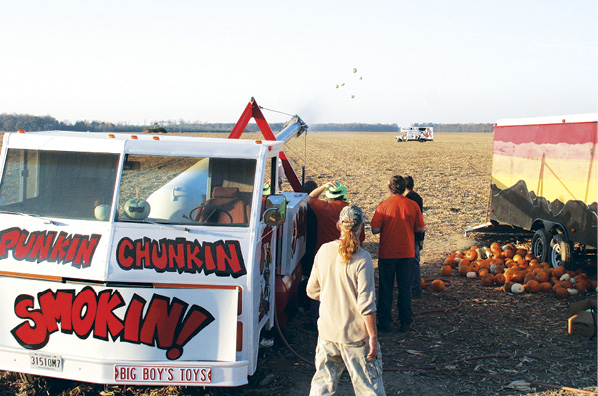 For most of these teams, however, Punkin Chunkin isn’t just about the competition.

“Punkin Chunkin is about fun and comradery,” said Bill Thompson, one of the originators of the Punkin Chunkin association, which has donated over $1 million in the past. “We like to chunk pumpkins and have fun. We donate to different charities in need, as well as sponsor scholarships for students interested in Agriculture, Mechanical Engineering, Science, and culinary schools.”

As Mark Malatt explained, “There is nothing like the feeling I get when I see the excitement and smile on a kid’s face (young and old) after shooting the cannon.” Team SMOKIN! participates in festivals, fund-raising activities, sponsors scholarships, as well as hosts STEM activities and demonstrations at local schools. He added, “Chunkin time is a season of activities that my whole family and many friends look forward to every year.” 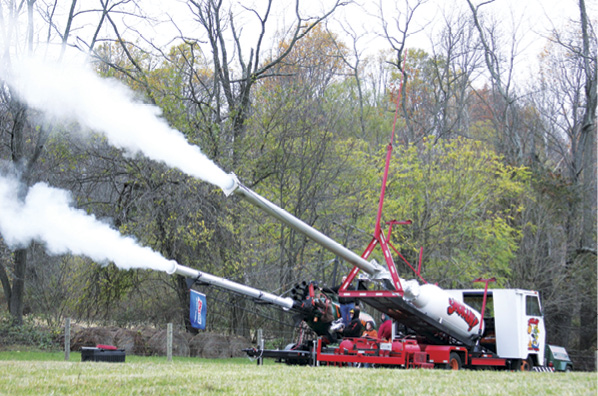 Seeing all the new ideas the competitors come up with every year, especially the youth teams, is especially exciting for Thompson. “Punkin Chunkin means seeing how far a pumpkin can fly on a beautiful autumn day with all my friends and competitors,” he said. “I have been doing this for thirty years, and I get a thrill every time someone hollers, ‘fire in the hole!’”